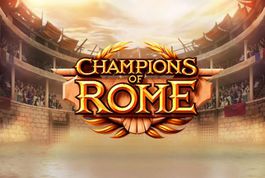 When it's time to put on the heavy Gladiator's helmet, and the heavy shield and armor, it is also time to face the music of 10,000 throats in Rome's famous Colosseum. This is the Champions of Rome slot, a thrilling reel action that takes one of the most amazing events in human history and makes it an online slot, filled with action and chances to land some amazing prizes. The game was developed by some of the coolest slots experts - those at the Yggdrasil gaming, which has become famous for creating some quite exceptional slots titles.

Considering the theme, we are indeed kind of thankful for having the opportunity to be distanced away from the entire bloodshed, yet still enjoy some of the action. The reel-set has been laid out in the standard grid of five reels, three rows and 20 paylines which offers plenty of room for the players to discover the bonus features and the potential prizes which could go as high as 3000x multiplied by the winning stake.

That being said, let's go into the details that make this Yggdrasil slot game a true beauty and one of the most anticipated titles in the first half of the year.

How To Play Champions of Rome Slot

Setting up for the gameplay takes just few clicks and that involves figuring out the Coin Value and the bet level. Fiddling with these controls will reflect on the windows that correspond to each one, while the total bet per spin will be shown in the bottom ticker. The smallest amount that you can play is just £0.20 and the highest amount is a heavy £100 per spin. There are many amounts that exist in-between these two margins and the players are welcome to select whatever amount works best.

The Champions of Rome slot has few other controls and actions that help for a better and bigger gaming experience. The controls include the Autospin, which is located to the right of the stylized roman wreath button that represents the 'Spin' button. Selecting the Autospin opens up the window that lets you select how many times the game will turn the reels on its own. Last but not least, the paytable. This is a crucial piece of information in any given slot game, and this is where you are able to see which symbols pay how much and detailed information about the Champions of Rome free spins and other bonus features.

Besides the thrilling game action, the slot design is one of the best highlights of Champions of Rome. Just few turns of the reels and it becomes immediately visible that the designers have had lots of fun with this slot game. You will get the real gaming experience as it was meant by the famed gaming company.

The Champions of Rome slot has picture only symbols, and these are some fierce symbols. You are going to experience few gladiators in full body armor duking it out on the reels. Besides these there are some animal symbols such as that of an eagle, a bull and a lion. Additionally,, there are golden, bronze and silver medallions depicting gladiators.

The most valuable symbol is the life-like gladiator who pays 60x when five matching symbols occur on a payline. As for the game's specialty symbols, these are the Wild represented by the eagle that is carried high on a staff by the Roman legions. The scatter symbol is responsible for the free spins game, and for additionally retriggering these.

How To Win Champions of Rome Slot

The game's top prize is 3000x but this isn't the only prize as there are several neat symbol pays, as well as multipliers. During the free spins bonus feature you can get one of hte three gladiator weapons: trident, sword or mace. Each one of these weapons comes with a different kicker during the gameplay. For example - the trident will result in four gladiator wilds placed at random; the  Mace will result in 2x2 green gladiator wilds and the sword comes with 2x1 or 1x2 red wild symbols.

Once the scatter symbols land, the player can select between two modes for the free spins feature. The initial 8 free spins could possible go up in number when additional scatter symbols land. The Wild symbols play an additional role, especially in the Champions of Rome deathmatch mode, where you advance through three levels of the bonus game. If you get to the end of the third level, you get additional multipliers and the prize could result in as many as 200 coins.

If you are ready to don on the body armor and enter the Coliseum, you can start right here by claiming a welcome bonus right on this page.