The Drawf Mine slot is one of Yggdrasil's only games that don't include mythical creatures or a futuristic theme. The game has expanding rows and 1024 ways to win with bets as small as £0.10. Enter the mine for a chance to land a free spins bonus feature that expands the paylines to 16,807 ways to win. The potential prize is 3,904x on the bet. 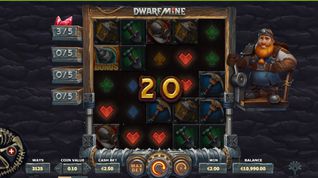 Dwarfs have been often related to the mining industry, perhaps due to Disney’s Snow White and the Seven Dwarfs. Actually, according to a German legend, dwarfs are “short and ugly” human-like creatures that dwell in the mountains and are usually associated with mining, crafting and smithing. Probably this is the inspiration behind Hollywood’s version of dwarfs today. And it’s not just Disney and Hollywood – dwarfs have been part of Blizzard’s World of Warcraft game as well, and Yggdrasil has just joined the list. The software developer is releasing Dwarf Mine slots – an online video slot that takes players on an adventure in search fort treasures hidden deep in underground mines. Keep reading to find out more!

Dwarf Mine slots has five reels and 1,024 ways to win. It will be available to play from 10p to £125 a spin on all devices and it’ll come with and Expanding Reels option which can give you up to 16,807 ways to win.

The game takes you deep underground to mines – you’ll see the remains of buried people and dinosaurs in the background, as well as a Leprechaun hat encased in the solid bedrock. The reels are set inside some sort of a primitive hydraulic digging machine operated by a red-bearded dwarf. He stands to the right of the reel set with the lift lever in his hand. There’s also a nice animation that sees him going up and down to the rhythm of the expanding and retracting reels.

There are lots of theme-related symbols like shovels, axes, helmets and lanterns. Lower values are represented by spades, clubs, hearts and diamonds. When you land the same symbol on at least three consecutive reels starting from the left, you’ll get a payout. If more than one symbol on one reel appears, you receive a multiplier.

How To Play Dwarf Mine

Before you start your mining adventure, you need to set your bets. You don’t have to place your bet on individual lines, just choose the total bet. This is done by clicking the “-/+” button by ‘Coin Value’ and selecting between 0.10 to 125.00. ‘Max Bet’ button is also here if you wish to instantly select the maximum bet, without having to go through all values. When you’re ready, press the circular arrow button in the centre to spin the reels, or use the Autoplay option to set the reels to spin automatically and without interruption for a number of times.

How To Win Dwarf Mine Slots

Dwarf Mine slots is set to be released on March 21st, so we still don’t have all the information regarding the symbols’ payouts, but we’ll update this review as soon as the game goes live. What we were able to find out is that the helmet symbol is the highest-paying of the standard symbols, awarding 1.4 times your bet if you land five on adjacent reels.

Dwarf Mine originally has a 5×4 format with 1,024 ways to win. However, any scatter symbol appearing in the base game will increase the rows from four to five, six or seven, depending on the number of scatters. This means that, instead of 1,024, you get 3,125, 7,776 and up to 16,807 ways to win, respectively. An expansion in the base game will reset to the default after the current spin, but in the free spins features, it will stay at the full size throughout the round.

The slot has not one, but two different free spins features. The first is triggered by landing three scattered drills anywhere on reels one, three and five in one spin. For this, you will get 10 free spins that will be played on the maximum reel set with seven rows and 16,807 ways to win.

The second type are the Collectable Free Spins which are awarded for collecting sufficient crystals of one colour. There are green, orange, blue and red crystals which can land only on expanded rows. You can check your progress on a collection meter placed on the left of the game window. Once you collect five, you get five Collectible Free Spins. During the feature, only the four crystals are present on the reels, which increases the chances of scoring a win.

Our Dwarf Mine Slots Review

Yggdrasil Gaming are known for their top-notch design and Dwarf Mine slots is another proof of that. The visuals are excellent, the animations are silky smooth and the backing track is well-fitted.

When it comes to the gameplay, there aren’t too many extras here but the expanding reels and free spins deliver enough action to keep things ticking over. Also, the potential award of 3,904.2 times your bet on each free spin is more than enough to give this game a try!

So, start mining and enjoy Dwarf Mine slots!