The maximum exposure (payout) is close to 20,000x on the winning bet and the range of bets that lets players roll on small amounts or a maximum of 30.00 per spin. There is a free spins bonus granted with three scatters anywhere on the 120 paylines, and there is another free spins bonus with multipliers given with four consecutive wins. All on a high variance. 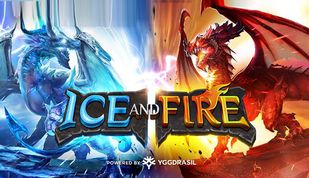 Play the Ice and Fire slots for a chance to win win cash prizes through the mirror reel-sets which replicate wilds and can trigger free spins and multipliers.

Good and evil, sweet and hot, ice and fire. The world is full of contrasts and so is the second Yggdrasil game to be released in a brief amount of time that pits one reel-set against the other on a same screen. The game at hand is Ice and Fire slot, which is all about the opposite worlds that can come together for the potential payouts.

The players will discover two reels, both of which offer five reels and five rows that spin across 60 paylines on each side. The sum effect is 120 paylines in total that turn up symbols that belong in a world of epic fantasy: dragon eggs, wild fierce animals and their masters, and the special symbols such as the wild and the bonus.

Payouts on Yggdrasil's Ice and Fire are made with the cascading wins mechanism, which means more than a one win can occur from a single spin. Symbols that are part of a win outcome disappear and the blanks become filled by a new set of symbols that push down coming from the top. The game has touching points with Dragon Fall slot, from Blueprint

The game is released on Yggdrasil's platform but is produced by Nebula and comes by way of Dream Tech.

Design-wise the game isn't going to impress too many people as it repeats tropes that have been seen plenty of times. Nevertheless, the adventure on the reels does have a dynamic edge to it so Ice and Fire slots will find its place on the online casino slots rosters.

The symbols are still on the reels but they do come to life when the game dishes out a winning outcome, in which case there is a modest light show around these symbols.

How to Play Ice and Fire Slot

Start the gameplay by pressing the spin button, which can be found in the center-bottom of the screen. Push it once and the reels will spin one time, deducting the bet amount that's been selected as active.

The autoplay option can be accessed by pressing the button which is to the right of Spin. This action will open up the menu where you can select the number of automatic spins to play across the reel-set.

There are optional settings in Ice and Fire slot which let you set a number of stops, such as stop on a win limit or stop on a specified loss amount, and so on.

The Total Bet amount can be selected by working the minus and plus buttons underneath the Coin Value label. The smallest bet is £0.12 per spin, which moves both reel-sets. The maximum bet is £30.00 per spin.

How to Win Ice and Fire Slots

Cascade wins can entail multiple winning outcomes resulting from the same spin, but the game has more than one extra feature.

For example the wild symbol substitutes for any of the symbols on the paytable. The wild symbol can clone on the reel-sets, irrespective of which one it appears on.

If wilds in Ice and Fire slot substitute in a winning outcome and it can post on the opposite reel-set and interact with the eventual winning combinations there.

The game's most lucrative symbol pays 25x multiplied by the winning bet for five queens, however any of the wins can be boosted by the multipliers.

The multiplier that is so anticipated in the game is awarded when three dragon eggs fall on the reels, irrespective of reel-set half.

The ensuing free spins bonus grants 10 rounds, with each dragon egg falling anywhere on the reels adding another five. As it can be expected, the multiplier values begin with each cascading win.

If you manage to get four wins in a row in the base game, Ice and Fire slot will trigger a pick-me game where you choose the number of free spins, between 8 and 15. Throughout the bonus, the game adds extra wild symbols.

It's difficult to say whether the game will be made available as a free play demo, and this opinion is solely based on the fact that three companies have a say in the production and release. Nevertheless, to account holders looking to play at online casinos that have Ice and Fire, the game will be available on mobile devices and personal computers.

Just like the reel set, the total sum of the product is a contrast in and of itself. A gameplay that doesn't entice any more spins than those which had satiated your interest, is mirrored by a serious exposure of 19,139x on the winning bet, and a very narrow range of bets that ends with 30.00 on the spin.

Discover the Ice and Fire slots by claiming a welcome offer right from this page and play at top shelf online casinos.