Play the amazing 20 payline slot called Jackpot Raiders slot, a five-reel by three-row reel set with a return to player of 96.30%. This is an Indiana Johnesesque-themed jackpot slot game with 10,000x prize that could be won during the free spins bonus, with an additional jackpot prize that could be won by collecting five of the same gems. The game's top base-game symbol is 4000x. 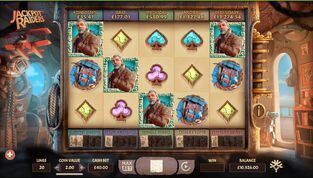 Discover many hidden treasures including a jackpot and 10,000x symbol wins in the Jackpot Raiders slot.

Set up this Indiana Johnesque slot game by Yggdrasil for some good slots entertainment and for a chance to win the game's jackpot prize or the symbol win prizes. The Jackpot Raiders slot takes bets on a reel-set arrangement of five reels and three rows. The game's bets are configured by using just one setting, and that is Coin Value. The outcome in the Cash Bet window is tied to the Coin Value being automatically multiplied across the game's paylines.

How to Play Jackpot Raiders Slot

To set the reels spinning, use the spin button, which is centrally placed and just below the third and middle reel. The game has a total of 20 always-active paylines. No matter what bet per spin is made, the Jackpot Raiders slot will always have all of the paylines as a backdrop to the reel-action.

To the right of the spin button is the autoplay option. This lets the players select a number of pre-set automatic spins, which will unfold that many times while drawing from the player's balance the amount of the bet that has been previously specified. There isn't the option to set a win or a loss limit, so players just be mindful of the balance, while letting the slot game do its thing.

How to Win Jackpot Raiders Slots

Like every other slot game, Jackpot Raiders has its paytable. This is where we can view the symbol pays, bonus feature information and gameplay details. Access the paytable from the plus button, which is in the bottom left corner of the page and then by selecting the 'i' icon from the list.

The most valuable symbol in Jackpot Raiders is the game's Scatter/Bonus symbol. Land five of these and get 10,000 coins multiplied by the line bet, plus ten free spins. Of the standard Jackpot Raiders slot symbols the most valuable is Sam the adventurer, followed by her companion, Bear. Five of these symbols on a payline award 4000x  and 2000x, respectively, multiplied by the line bet. There is another high-valued symbol in the hat, which pays 1000x and not half bad either is the backpack, paying 750x on the line.

The game's jackpot is awarded when the player collects five identical gems, which appear in either of the free spins bonus games.

There are three ways to trigger the bonus. One is by collecting three or more scatters. Either will reward 10 free spins, but four scatters will also pay 1000x coins and five will pay 10,000x.

Then the game turns up the rolled map symbols. These don't pay anything, but collecting five maps of the same color will provide ten free spins and one jackpot gem.

Then there is the Pick and Click game, which will open up a set of treasure chests. Pick one and revel the compass which could turn the dial to the 10 free spins mode.

All of the jackpot free spins have a x3 multiplier.

The Treasure Hunt bonus game is also there, and it is triggered when three or more scatter symbols activate the compass, and this device then points to the Bonus half. When playing this bonus, select a character - either Bear or Sam - and then go on to select a route through the jungle. Each route comes with its own set of pros and cons, but ultimately, the lucky players will cross the bridge and get to the reward that is packed inside a treasure chest - a relic, a random map or 50 to 1800x coins.

Yggdrasil Gaming are by now a renowned studio with so many releases under their belt. Since few years ago all of their releases are fitted for the mobile device screen. Whether it a mobile or  a tablet, an android or apple device will play this slot game.

We have here an amazing slot game by a top notch studio. Enjoy lots of ways to the bonus feature, and not just one of these. There is a jackpot prize and symbol pays of hefty amounts that could be potentially won, with the wild symbol.

To play Jackpot Raiders start right from this page by claiming a welcome bonus to one of the online casinos.