Nirvana is an awesome slot made by Yggdrasil who have developed a knack for creating mystery-themed slots. The game has five reels, three rows and a top symbol prize of 5000x on the line bet. With a return to player of 96.20% at above average level, Nirvana welcomes a fun time on the reels with 20 paylines. Claim a welcome bonus today to discover the game at one of the casinos on this page. 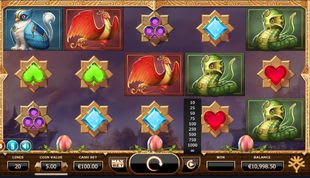 Play the Nirvana slotfor a chance to win bonus features, boosters and a top payout of 5000x coins on the line bet.

What is Nirvana? The word is used in our everyday language to describe something that is awesome or sublime, but in actuality, nirvana is a 'thing' that has been defined, in writing, by a number of sources. Yet what Nirvana does and what it is, is beyond the comprehension of the mind that has been immersed in its learned logic since childhood, unless the mind is cast away for that blink of a second into the cosmic time. This idea seems to be spun into a secret world in the Nirvana slot by Yggdrasil gaming, and it does work well to create a perfect, or shall we say, nirvana-like, experience for the players.

The arrangement of the grid is the standard and most-appreciated by the players out there: five reels and three rows, whish spin across 20 always-active paylines. As for all that which represents the theme, we have picture symbols of strange creatures that are combination of two, or more, animals. And the other category of symbols are the cards suits wrapped inside ornate frames.

A lot of the magic on the reel-set is inspired by the bonus features which come in the form of three types of free spins: Wild Seeds, Mega Reel and Nudge Reels. As for the Free Spin bonus symbol itself, it comes with the heftiest symbol of 5000 coins for an instance of five of the same anywhere on the paylines.

How To Play Nirvana Slot

The can is set up through the buttons under the Coin Value label, located in the bottom left of the screen. There the players can select the value that will be extrapolated per each payline, and there are always 20 paylines active. The smallest amount that can be selected is £0.01 and that produces the smallest bet per spin of just £0.20. The higher the Coin Value the higher the Cash Bet, so we have a top amount of £5.00 per line which results in a total of £100.00 for the bet per each spin.

There are many amounts in-between the two margins, so the players do have a wide range of bets to select. There are few other gameplay features pertaining to the controls, such as the autospin button, which lets the players select a number of automatic spins on the specified wager, and that comes with an up to 'infinity' option as well. The Paytable is the place that conceals all of the symbol pays and the information about the bonus feaures. This button is tucked behind the 'menu', which is located in the far left bottom corner, in the form of a plus button. And that is all for the controls and how to play Nirvana slots, which takes us to the matter of winning in this game.

How To Win Nirvana Slot

Setting up for the gameplay takes us to the 'task' of playing, whether for fun or for the potential wins. The symbol pays in the paytable state that the picture symbols' value ranges from 150 to 250 multiplied by the line bet, in the most desirable instance of landing five matching symbols. The most valuable of these is the fiery bird, paying 250. These can be substituted by the wild symbol, so that is always an advantage in the event of the wild appearing when four symbols are visible on a line.

The free spins bonus is the most desired thing on the reels, with 10 free spins coming in either instance of three, four or five of the lotus symbols. It isn't a coincidence that the slots experts at Yggdrasil had selected this as the symbol that brings on the best possible outcome for the lucky players out there, as the lotus flower is the symbol of the state of Nirvana and enlightenment, as Shakyamuni's disciple, Kassapa, got to discover.

As for the additional bonus features that are tied to the free spins, the players will witness some real magic shaking out in the Nirvana slot whenever the free spins bonus becomes retriggered with the landing of additional three or more lotus symbols. In the event, either the Wild Seeds, Mega Reel or Nudge reels will appear to add a kicker to the bonus.

Wild Seeds adds two to four wilds on the screen, which substitute for any, except the lotus scatter. With the Mega Reel bonus, the three reels in the middle become one, as in, the symbols that appear on that one reel are all the same. And the Nudge Reels does exactly that to the symbols, towards a better outcome, but only if the outcome will be better then where the symbol has been in the first place.

To experience the Nirvana slots, you can start right on this page by selecting one of the welcome bonuses to play at one of the casinos.