Yggdrasil Gaming’s Splitz edition adds a new slot game to the portfolio called Syncronite: Splitz. With a design inspired by the Art Deco era and Gatsby-like twists and spins, this game surely made an appearance and left a bold impression since its official release. Let’s see how this online slot game ranks, compared to the competition. 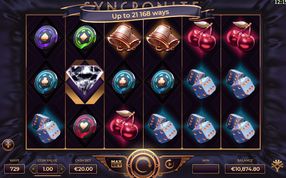 Syncronite: Splitz is a 6 reel online slot game from Yggdrasil Gaming and the third member in the Splitz family alongside Neon Rush Splitz and Temple Stacks. The base game offers 729 ways to win, but the Splitz feature increases it up to 21,168. Here, symbols might split up and randomly transform into other symbols. Slots experts and analysts announced it as the slot games that have incorporated the highest jackpot potentials, along with a great RTP rate and bonus features.

Syncronite is a classic art-deco slot game by Yggdrasil with a Splitz mechanic. This Splitz concept works in a way that turns any symbol on the reels into multiple smaller ones, increasing the potential ways to win. To create a winning combination, you’ll need to land 3 or more matching symbols on adjoining reels, starting from reel 1. On each spin, at least 2 reels will sync to show the same combination of symbols. Syncronite: Splitz offers over 20 thousand ways to win via the Splitz mechanics, and the maximum payout is astounding 64,800x stake. There are no bonus games; however, the slot game offers quite exciting features to enhance the value it gives. Synched Reels and Splitz features blend nicely in the gameplay. This way, the main emphasis is on the mechanics that impressed even the harshest critics.

This game supplier pays a lot of attention into creating games that would be intuitive to navigate and sharp in their design. The visuals in Syncronite: Splitz are glossy, the lights and atmosphere is dimmed and mysterious as if you’re visiting a Speakeasy bar. The background music is a mix of bouncy and ambient jazz, perfectly blending with the visual impressions. Chic, sophisticated and glamourous, reels and symbols feel silky and velvety.

On the reels, you’ll find poker chips decorated with diamond, heart, club and spade motifs. Besides chips, you’ll see cherries, dices and bells with pastel and flashy colours. The top paying symbol is the diamond, and you’ll only need two matching diamonds for a reward. For other symbols, you’ll receive a payout of 1x to 10x bet for hitting 6 of the premium symbols on the reels. You can hover and click on each symbol to compare their value when you hit 3,4,5 and 6 in combination.

The Syncronite: Splitz RTP is 96% which is about average compared to other new releases. RTP stands for Return to Player, displayed as a percentage showing the hypothetical payout of a slot game. This means that you can win £16 for every £20 you wager. You can adjust your bets starting from  £0.10 to  £10 per spin. The variance, which indicates how frequently the game is going to land winning lines, is high. This means that Syncronite: Splitz will provide less frequent wins, but the prizes will be more prominent. The hit frequency rate is 27.34%, meaning that theoretically, you’ll land a winning combination on just over a quarter of spins. The maximum payout you can expect from a single win is impressive 64,800x your total stake.

Gameplay and Features on Syncronite: Splitz

In the Syncronite: Splitz slot, the main focus is on the Splitz engine. Here, symbols on the synced reels can split up to 8 matching symbols, all transforming into the same matching symbol. On each spin, you’ll notice that two reels are always synced. These reels can trigger the Splitz feature, which further aligns with Synced Reels feature and drastically increases the possible winning combinations. Read more about this rather unusual but intriguing gameplay.

This feature comes into play when at least 2 and up to 6 matching symbols land on the reels. You’ll notice that you’ve triggered the Splitz when full reel golden lion icons show up. When they land, they can split in maximum 8 of the same pay symbol.

This feature pretty much sums everything in the title. It can synchronise the reels from 2-6, mirroring each other on the spin. It is possible to land more than 2 synced reels together, and you can get a lot of winning combinations this way, especially if you activate the Splitz at the same time.

You can play Syncronite: Splitz on all devices including desktop and laptop computers, tablets and mobile. Almost every new game release nowadays is developed with HTML5 that enables compatibility and easy platform access. The classy sound and visuals work very nicely on the small screen. The simple but engaging gameplay works well here too.

Yggdrasil has been pretty busy in the past few months. They’ve released many differently themed online slots that have quickly become quite popular in the players’ community. Check out their latest PopWins additions BountyPop and CherryPop if you’re up for a different retro experience, wrapped up in neon flashy lights and exciting bonus features. They also offer pretty engaging festive titles, and one of those worth exploring it is Carol of the Elves, typical Christmas-themed slot that offers another story about the most exciting time of the year.

The gameplay and winning options in Syncronite: Splitz are relatively simple and straightforward. The classy, posh feel to the design is impressive and won us over from the very first spin. It might look elegant and simple, but its high variance offers outstanding payout amounts of over 64,800x your bet. If you follow the news regarding new releases closely, you’ll know that there aren’t many other slots that can reach out this potential win number. The action might look repetitive, but certainly not dull as the provider always delivers the best when it comes to visual presentation and game interface.

Discover Syncronite: Splitz slot by claiming a welcome offer from this page and play at top-rated online casinos.