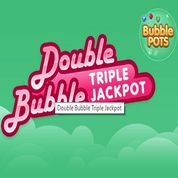 Double Bubble is one of the most successful and most popular online slots in the past five years. Ever since its release in 2014 the game has attracted a lot of players, many of which keep coming back to play it. It made a lot of sense to release Double Bubble Triple Jackpot slot since many players who liked the original game also liked the Jackpot version. So now, Gamesys decided to up their game and release the Double Bubble Triple Jackpot slot, a game that features not one, but three progressive jackpots.

The layout is just the same, there are five reels and three rows, with 20 paylines. You get to choose how many paylines are active and the total progressive jackpot prize depends on your total bet, i.e. the chance of winning is proportional to the total bet.

The situation is pretty clear here. Double Bubble slot is based on the old fruit slots from two decades ago. But the game features a rather modern design. Although the symbols will be recognized by anyone who is into older retro slots, you’ll notice that the way they’re drawn is quite contemporary.

We are yet to see whether the Double Bubble Triple Jackpot slot would reach the popularity of the first version.

The control panel will look familiar if you have ever played the original Double Bubble slot or the previous jackpot version. You can play this game with as little as a single penny per payline and you can choose how many paylines you’d like to activate. The Bubble Line Multiplier feature pays depending on the number of active paylines.

You can play this game with all active paylines with as little as 20p. The maximum you can wager in Double Bubble Triple Jackpot slot amounts to £200, or £10 per payline for each of the 20 paylines.

We already mentioned that playing with all active paylines increases your chance of winning in Double Bubble Triple Jackpot slot. The winnings depend on the amount you wager per spin, if you hit a winning combination then the value of the combination is multiplied by the wager per line.

You will need to get at least two or three symbols across a payline for a winning combination to be activated. The symbols need to be arranged across an active payline from the leftmost towards the rightmost reel, a win will not be triggered if the symbols are aligned in the opposite direction.

There are particular combinations that trigger bonuses and special feature, but a bit more on that below.

The Bubble Line is a feature that was available in the original Double Bubble as well. When the special bonus symbol appears anywhere on the reels it gets placed on the designated Bubble Line.

This bonus feature is triggered when the bonus symbol that activates it appears on the first, third and fifth reel. In this feature you get to pop a bubble and when you do that your prize will be revealed. This prize is also multiplied by the coin value.

The progressive jackpot can also be won in the Bubble Popper round. Your likelihood of winning the jackpot prize depends on the amount that you have wagered, but the potential jackpot prize is the same for all players who play the game at that time. As it is a progressive jackpot, i.e. jackpots, prizes grow based on the wagered funds. The jackpot seeds at £25,000. There’s a mini, a major and a grand jackpot. You can win either of those and they are awarded randomly.

Other Popular Slot Games That Had Sequels

There are hundreds of online slots, but only the best and most popular ones have sequels. That’s one good criterion to determine whether a game is popular and played by many. If there’s a sequel then it is popular.

Now let’s have a look at some of the most popular series of slots.

The original Thunderstruck by Microgaming was released back in 2004 and it was hard to predict that it will become as popular. Even though it’s been 15 years since its release, the game is still enjoyed and available at a range of online casinos. The theme is Norse mythology and Thunderkick was only the first of many games featuring this theme.

Since we listed two series of slots by Microgaming, it only makes sense to include a game that was made by their biggest rivals – NetEnt. Jack Hammer is an exciting online slot, based on the comic book of the same name. The game tells the story of the superhero Jack Hammer who is on a mission to defeat Dr Wuten.

You will see boats, machine guns and action scenes on the reel. The sequel was named Jack Hammer 2 Fishy Business and this variant features 99 paylines, with a maximum wager of £250.

If you are looking to try this game out, but you’re not at your PC or don’t have your laptop with you right now, don’t worry because this game is completely mobile-friendly, it was developed using HTML5 technology, so you can launch this game simply by accessing a casino website in your mobile browser. There’s no need to download any apps, you can access the mobile version in the same way you access the desktop variant.

Double Bubble Triple Jackpot RTP is 95.53%, which is significantly lower than the Double Bubble RTP that stands at 96.20%. Regardless of that, we think that the prospect of winning a massive jackpot prize will be sufficient to draw many players, including fans of the original Double Bubble, as well as people who haven’t played the first release before.

If you’re looking to play for one of the three jackpot prizes, register with one of our partner sites, claim your SlotsWise bonus and you can start playing Double Bubble Triple Jackpot slot right away!

Can I play Double Bubble Triple Jackpot slot on mobile?

Double Bubble Triple Jackpot slot is completely mobile-friendly, as it was developed using HTML5 technology. You can launch this game simply by accessing a casino website in your mobile browser. There’s no need to download any apps, you can access the mobile version in the same way you access the desktop variant.

How to win the progressive jackpot in Double Bubble Triple Jackpot slot?

The progressive jackpot seeds at £25,000 and there are three types - Mini, Major, and Grand Jackpot. All of these jackpots are randomly awarded so there is not a strategy on how to win some of them. Your likelihood of winning the jackpot prize depends on the amount that you have wagered, but the potential jackpot prize is the same for all players who play the game at that time.

What other bonus features does Double Bubble Triple Jackpot slot have?

The game comes with few bonus features, including the Bubble Line and the Bubble Popper feature. The Bubble Line is a feature that was available in the original Double Bubble as well. When the special bonus symbol appears anywhere on the reels, it gets placed on the designated Bubble Line.