Reel Rush is a colourful, fruit-inspired slot machine that reminds of the old computer games. Developed by NetEnt, it plays on 5 reels and 45 ways to win which can increase up to 3,125. The game offers special features, including Re-Spins and Free Spins where you can win up to 3,840x the stake. Is Reel Rush worth giving a try? Find out in our in-depth Reel Rush Slot Review. 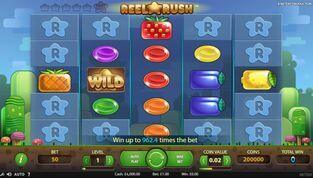 NetEnt has developed some quite extraordinary games over the years. Those who have played at least one game by NetEnt surely realise why we say that this provider has developed some of the best and most exciting games on the market.

The game we’re discussing here is a slightly older title, from 2013, but it is still played at a range of online casinos, including some of our featured sites. It’s called Reel Rush, a fruit-themed slot with expanding reels and up to 3,840x stake payouts.

If you’re looking for a game with cheerful fruit symbols on the reels, retro vibes and a non-standard set of reels, then the Reel Rush slot would definitely be the right slot for you. Discover why in our full Reel Rush Slot Review. 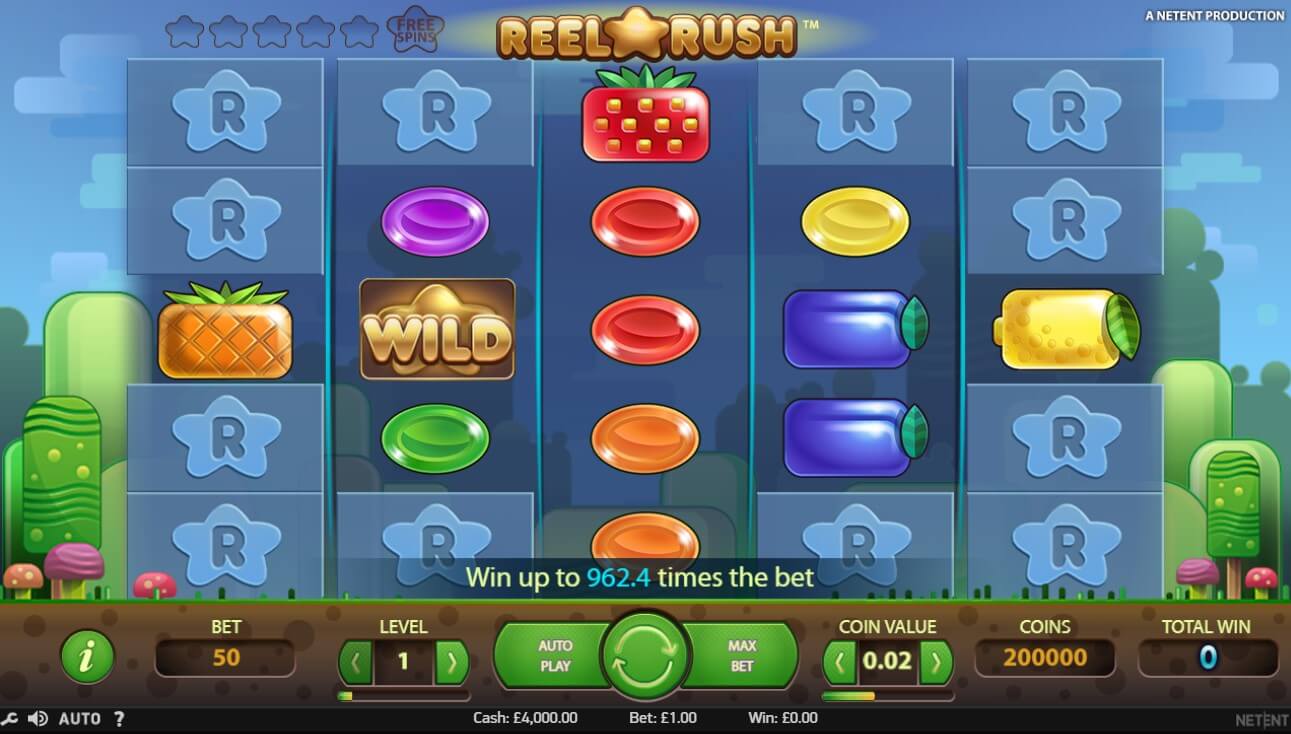 Reel Rush is a fruit-themed slot machine developed by NetEnt in 2013. It’s a game full of fun and exciting features from which you can win up to 3,840x your stake from a single spin. The Reel Rush slot has Nintendo-inspired graphics, but with a modern twist.

To start playing the Reel Rush slot, make sure to select your bet per spin which ranges anywhere from £0.50 to £100. Winning combinations occur by landing three or more matching symbols across a payline, starting from the leftmost reel.

This NetEnt release is fun and enjoyable for both new and experienced players. That is because it comes with a Free Spins feature which is triggered via the re-spins. The feature takes place on fully expanded reels and delivers the biggest payouts. 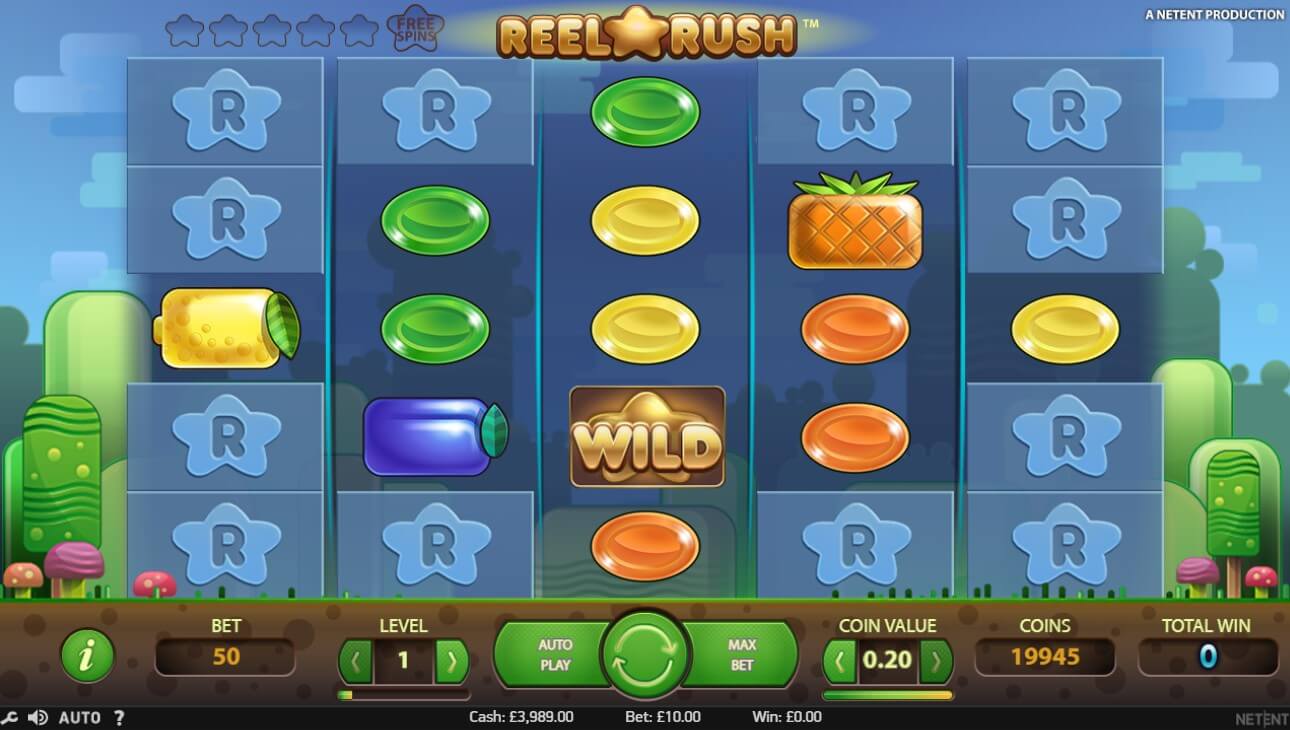 For a game that was released almost a decade ago, the Reel Rush slot looks great. It has a colourful, fruit theme that reminds of the old computer games.  The background is blue, with what appears to be trees, grass and mushrooms in the background.

Colourful symbols appear on the reels, and they represent popular fruits like watermelons, cherries, lemons, plums and a lot more. The graphics are bright and attractive, if a little arcade gamey - particularly with the fun but plinky soundtrack.

The Reel Rush slot’s RTP (Return to Player) is set at 96.96%, which is slightly above the industry average of 96%. In addition, the game comes with a medium to high variance, meaning that you can win medium or smaller wins more frequently during the base game.

The maximum win you can take from this game is 3,840x your total stake, which can be achieved through the bonus features. If you want to learn more about different RTP and variance models, read our Variance, Volatility and RTP guide.

The Reel Rush slot from NetEnt has exciting and engaging gameplay. The action starts on 5 reels where some of the positions are locked. The more positions you unlock, the bigger the number of active paylines will be. This is possible thanks to the bonus features, which we’ll explain in more detail: 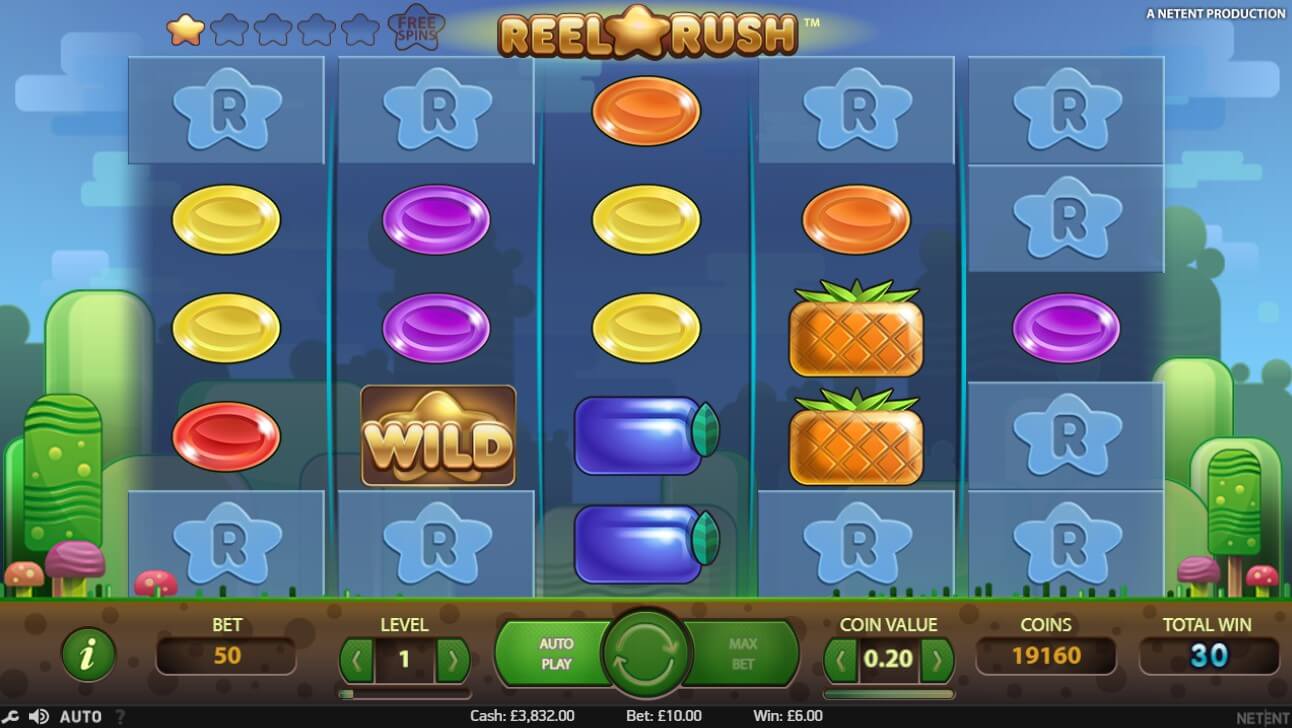 Every time you land a winning combination, the Re-Spins feature will be triggered. Then, the positions on the reels will start to unlock and give you more active paylines: 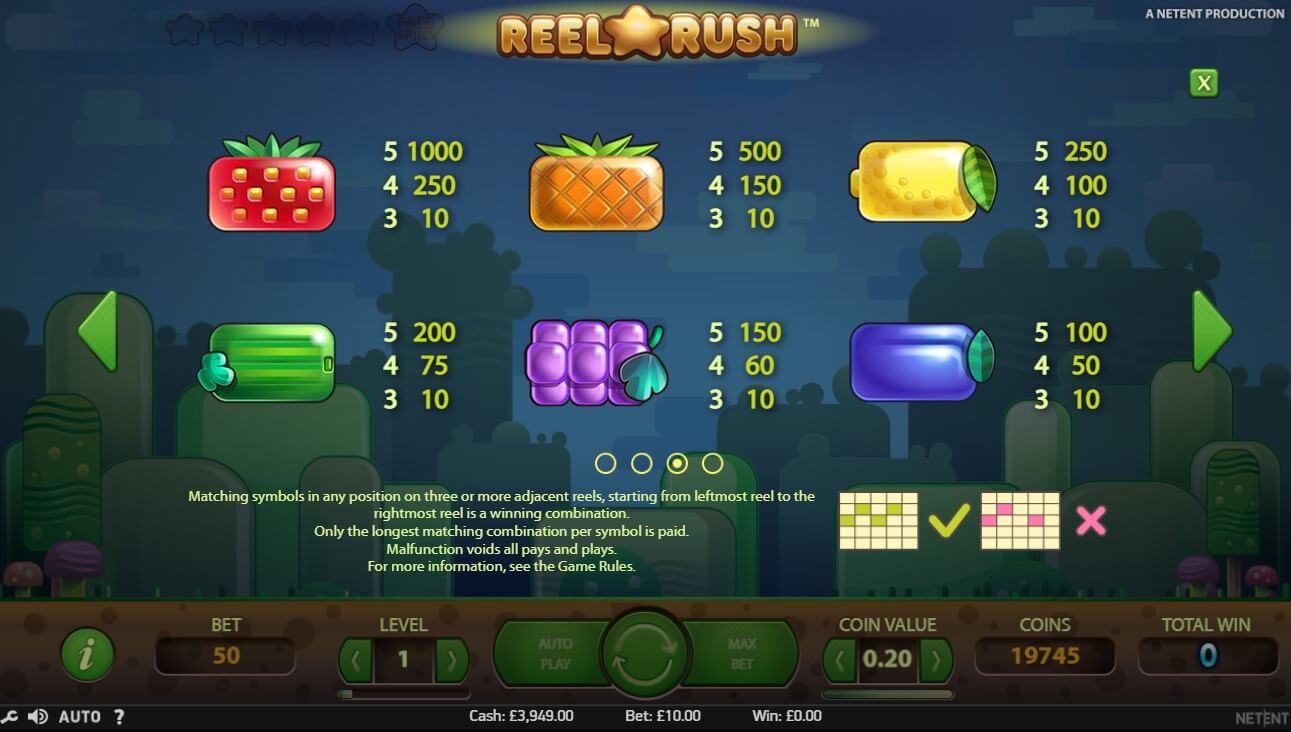 NetEnt has developed the Reel Rush slot with HTML5 and the game meets the latest technology standards. It’s optimised for mobile and tablet use, so you can enjoy it on any mobile device and any operating system you have.

NetEnt is a world-leading supplier of online slots. The company made some of the most popular slot games on the market, such as the Starburst slot. If you want to play some other NetEnt slots, we have a couple of recommendations.

One of the latest NetEnt slots to hit the market is Rome: The Golden Age. This is one of the best NetEnt releases in terms of payout potential, as it can deliver wins of up to 100,000x the stake!

Another popular slot from NetEnt is the Twin Spin Megaways slot. This game incorporates the Megaways engine and delivers up to 177,649 ways to win. Thanks to the free spins, you can win up to 20,000x the stake from a single spin.

Finally, we recommend you check the Gorilla Kingdom slot from NetEnt. The game takes place on a five-reel set that turns up high-paying jungle animal symbols, no wilds, and mighty scatters that can retrigger the free spins bonus many times over.

If you like retro fruity slots with a modern feel, we think that you are going to like Reel Rush, a slot that features fruity symbols and a high RTP percentage. The key to the biggest wins is to get consecutive wins and trigger the free spins feature.

Discover the Reel Rush slot by claiming a welcome offer right from this page and play at top-rated online casinos.