You've walked inside a haunted mansion. What do you do? Do you flee or do you stay for the reel-modifying show that can turn up multipliers of up to 20x , a random number of wilds and guaranteed wins? This is GreenTube-Novomatic's Ghostly Towers slot, which also packs a free spins feature where you can unlock additional features. 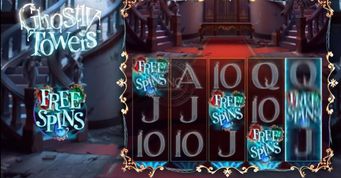 GreenTube-Novomatic are a company that have been actively making excellent slots for years.

Admittedly some of their productions are kind of basic in terms of the graphics design, but at the same time, they are examples where simplicity meets perfection.

On the other hand, those that stand out, do indeed stand out with the quality of the gaming experience and innovation in terms of gameplay and the way in which winning outcomes are made.

In the game at hand, we have one of the best takes on the ghost/haunted mansion theme. The gameplay of Ghostly Towers slot is simply said, amazing and quite innovative. It unfolds on a reel set of three rows and five reels that spin across 20 always active paylines.

The slots experts at GreenTube are taking us to a mansion that is haunted by a count, whose interference with the reels can count for much. This is the central figure during the gameplay and one that is a delight to watch unfold.

The count comes in the form of a ghost, hence the name Ghostly Towers slot. It pops up in the middle of the spin, slashing with the sword in a very cool visual effect.

Throughout the gameplay is a musical theme that is filled with spooky sound effects. The game has extra features that cause the screen to extend and make room for the jewel collecting bonus.

How to Play Ghostly Towers Slot

Let the ghostly spins unfold by pressing the green start button, which can be found in the bottom right corner of the reels. To the left of that button is the one for autoplay, which lets you toggle on the automatic spins.

If you wish to configure the autoplay more for an even greater at-ease take on the Ghostly Towers slot, then go through the menu to add the number of spins and the optional stops that let you place the control on the balance spend.

Ghostly Towers slot has a range of bets that extends between ten pennies per spin to amounts that are greater than £20.00. Regardless of your choice for the wager amount, the game will spin the reels on all 20 paylines.

The game plays both on personal computers and mobile and tablet devices. The orientation is automatically configured but playing on mobile is best in vertical mode, because of the extended reel-set.

How to Win Ghostly Towers Slot

Winning in the game requires getting three or more symbols to post on the game's payline. There can be more than one such outcome resulting from a single spin.

The symbols are split into two categories - high-paying gems and low-paying cards. There is also a wild symbol and a scatter.

Optimal payouts in the Ghostly Tower slot are made with five matching symbols, however, the reel modifiers can work their magic to any initial outcome more valuable at the end.

There is a free spins feature that is triggered by three scatters posting anywhere on the reel-set. It is, however, the ghost that is deserving of the greatest accolades, because it is responsible for triggering the modifying features.

Pierre, as the ghost is named, can appear randomly in the base game and in the free spins bonus.

The Wickedly Weird Wilds feature has Pierre pop up on the reels and throw up to 15 wild symbols anywhere on the reels.

The Spooky Symbol Slither displays a ghostly vanishing of the symbols by means of Pierre's sword. He slashes and swooshes to replace those symbols by a new set that creates a win.

The Mental Multiplier Mania has Pierre at his most generous. In the event, he appears on the reels and simply grants multipliers, with the topmost of 20x.

It is the free spins mode that entails the gem collecting feature. When the bonus triggers the lucky players get five spins and between six and ten gems, depending on the number of triggering scatters - either three, four of five.

Each gem colour is connected to a feature. You need to collect five matching gems to unlock the respective bonus.

The game is deserving of a free demo play slot version, and this is likely to happen once the promotional period is over. Those players who are curious to try Ghostly Towers slot can do so free of cost at online casinos that host demo slots. It is understood that wins don’t count for anything except for their entertainment value unless you’ve decided to play the game with real money.

The game is super fun to play and potentially rewarding. It has medium volatility and a gamble feature where players can risk to double each consecutive win, or lose. GreenTube-Novomatic have made a slot that is visually fun-loving but also has the features that make it a full slots experience.

Discover the Ghostly Towers slot by claiming a welcome offer right from this page and play at top-rated online casinos.

What are Ghostly Towers slot's RTP and variance?

The Return to Player rate in Ghostly Towers is 95.15%, a little bit below average, but still a decent percentage. In addition, the game has medium variance.

What is the Ghostly Towers slot max win?

The most you can win per spin is 2,400x the stake which can be won when you get a 20x multiplier from the Mental Multiplier Mania feature.

Can I play Ghostly Towers for free?

Yes, Ghostly Towers slot is available as a demo version on the recommended online casinos, where you can try it for free and see whether it's worth playing or not.