Unlike many other slots that have a superhero or superheroes for the setting, this game has a cluster wins payout system. The reel adventure unfolds on seven reels and six rows which can turn out clusters made of at least five spins for the win. The maximum number of matching symbols in a cluster is 20, or more, which results in the biggest payout. 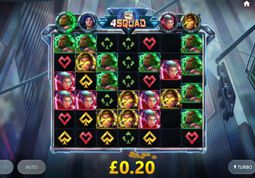 Our eagle-eye skilled slots experts have noticed that several amusing superhero-themed slots have been released thus far in 2020. Now the players will have another game to compare to the curious Diamond Force slot, and make a decision what to play, hopefully based on our insights. The subject of our review here is Red Tiger Gaming's 4Squad slot.

4Squad scores the most points on the extra features front. Each of the game's four superheroes possesses a special gift that reflects on the reel-set in order to modify the reels and improve the chances for a win outcome. So, let's get into this modern metropolis that is guarded by the 4Squad.

In terms of the graphic design, the game offers what all cluster-pay slots do: still symbols and electrifying visual effects that result from the payouts. The game is very dynamic and the cascading payouts system can result in multiple wins, the emergence of which is always fun to follow.

4Squad slots has a number of cut-scenes that appear when the respective superhero's feature modifier is activated, or when all four become active for a super-confluence of features. Throughout the gameplay is a cool soundtrack that mimics the background dynamics of a Hollywood superhero movie.

How to Play 4Squad Slot

A familiar Red Tiger layout for the controls does the players a solid in finding their way around with ease. The yellow round button sends the reels spinning and the smaller rectangle to its left causes the reels to spin faster.

On the opposite end of the screen is the button for autoplay and the plus and minus buttons are there to switch the bet amounts.

It is always smart to check out the bet amount before you start playing any slot game. The reason is, the casino's default may be a sum that is higher or much lower than what you intend to play.

The smallest bet on 4Squad slot is 10p per spin and the biggest bet is £80.00 per spin. There are many choices between these two numbers, so that the players can take their pick for the online slot adventure ahead.

When you select the autoplay button, the game opens up the respective menu where you can choose the number of automatic spins and add optional conditions that allow you to control the balance spend. The optional "stop on a bonus feature" or "stop on a specific win amount" are available among other controls.

How to Win 4Squad Slots

When it comes to the winnings, the game makes clusters with at least five symbols of the same kind, and there can be more than one win outcome from the same spin. The game has a wild symbol too, which substitutes for all symbols.

The high-paying category is made of the superhero symbols and their common logo, the upright fist pump, which is the most valuable symbols; the first pays 1x for five and 50x for 20 or more symbols.

None of the superhero symbols on 4Squad slot returns the bet with the smallest cluster win, so players need to see at seven or more to get that amount. On the other hand, there are the reel-modifiers and the cascading wins which can result in bigger and more payouts.

The game's bonus feature offers a unique way to make payouts. This is a free spins bonus but it is interesting how it comes about and what happens thereafter.

Score consecutive wins from the same spin to trigger the bonus. If all superhero charges have been filled (based on wins containing the respective symbol clusters) the game will start Superhero Mode.

A single spin is given and all low-paying symbols are removed from the picture. Each superhero has his or her own modifier.

Quake: when the green bar is filled the Quake superhero removes all low-paying symbols, causing a cascade of symbols.

Trike: When the blue bar is filled the game unleashes Strike. This dexterous warrior swaps random symbols with wilds, so a number of wilds can post on that spin.

Burst: The red bar results in the Burst feature, which results in random symbols being cloned to create a bigger win cluster.

Beam: The yellow bar calls on the man with the x-ray vision who bea,s a multiplier between 2x and 10x on the winning clusters.

All of these features can be tested on the 4Squad free play demo slot, which may be available at online casinos that host demo slots.

A cluster-wins game that can make consecutive wins and comes with four reel-modifiers sounds like a super superhero-themed slot to us. The maximum exposure is a quite alright 1250x and the RTP is 94.74%

Discover the 4Squad slots by claiming a welcome offer right from this page and play at top rated online casinos.