Clash Of The Beasts Slot

Players are going to find a reel set that consists of six reels and five rows that spin across 40 always-active paylines. Winning outcomes can consist of three or more matching symbols and players can spin the reels and play Clash of the Beasts for as little as 20p. The game comes with a theoretical return to player of 94.74% and medium volatility. 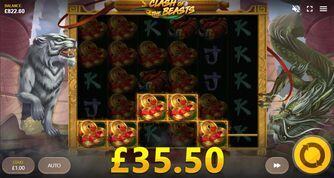 Clash Of The Beasts Slot Online

Red Tiger Gaming are tapping into the East Asian tradition of celebrating tigers and dragons as a pair of real and mythological beasts that are as fierce as the powers they possess. The grand reel set of Clash of the Beasts slot can spell out a lot of fun spins that can lead to a maximum payout figure that has an auspicious streak to it - the number 888x multiplied by the winning bet.

Clash of the Beasts Introduction

In terms of gameplay features, the present Red Tiger Gaming production can make for engaging base game thanks to the Clash Spins which can be awarded on any spin. The game comes with a random number of wilds being distributed across the reel set, as well as two different types of spins: Dragon and Tiger spins where players can win guaranteed wins.

Clash of the Beasts Design Features

In terms of graphics and design features, Red Tiger Gaming can make no mistakes in the making of a standardly-sustained slot game. Players are going to find a dynamic reel adventure with lots of moving parts and visual niceties that can make both the tiger and the dragon jump out of the screen.

How to Play Clash of the Beasts Slot

To get beyond the Tiger-Dragon rosetta in the intro screen players need to simply press the Spin button and watch the reels go towards the potential winning outcomes. To the left of that button is one that has the fast-forward symbol on. When toggled on, the button causes the reels to spin faster and stop quicker, for a more-speedy adventure.

Players can access the paytable and see the potential payouts that could be had by selecting the three-dash menu button in the upper-right corner. All of the payouts reflect the win amounts that are multipliers to the payline bet. The Clash of the Beasts slot paytable also contains information about the game's bonus features.

One way to play Clash of the Beasts is by turning on the Auto option, which stands for AutoPlay. The menu enables players to choose from the automatic spins presets by pressing the drop-down box. In order to launch the game in this mode, players need to add a loss limit. The advanced menu contains a few more options that pertain to the autoplay mode.

How to Win Clash of the Beasts Slots

Winning in the game requires matching symbols of the same kind to land in at least three positions of a payline, but have to start from left to right. The game has a wild symbol that is a representation of a patch of the tiger's fur and a patch of the dragon's scales, shaped as the yin and yang symbol.

This fully-animated symbol is a delight to see landing in three or more positions. A winning outcome that numbers six wilds can pay the game's maximum single-symbol kind payout of 888x multiplied by the bet. Of course. the wild also substitutes for all other symbols.

Clash of the Beasts Bonus Features

When it comes to extra features, the game has few things that can spice up the game. The Clash Spins is an event that springs up into play when both the Dragon and Tiger symbols land on the reels at the same time.

Then there are also four Dragon Spins and four Tiger Spins. These are triggered when there are two or more corresponding symbols. The dragon feature nudges the reels and rows towards potentially bigger wins and the tiger feature causes symbol swaps for a guaranteed win.

Clash of the Beasts Free Play

The game is available as a free play demo slot at online casinos that host games by Red Tiger Gaming. Players need to look for the game and play it in practice play mode in order to enjoy the features with free credits.

Clash of the Beasts Closing Thoughts

Red Tiger has made both weaker and stronger games, but this is a signature production of theirs nevertheless. The payout potential could be greater, but then the massive number of paylines can create multiple winning outcomes from the same bet. We have positive impressions of the game overall. Another game with a similar theme is Dragons and Magic slot by Stakelogic, which has a fierce reel modifier and graphics and a gameplay that are as exciting.

Claim a welcome offer to play Clash of the Beasts slots from a choice of best UK online casinos. Start right from this page and use your offer today.