Fruit Blox is a retro game with a modern twist and a load of exciting fruits that appear on the reels. Play it at one of our featured sites and claim your bonus! 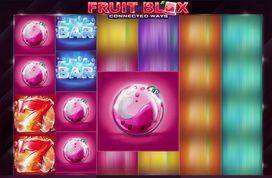 There have been quite a few fruit-themed games over the years. In fact, you probably know that fruities is just another word for slots. So, the announcement of a new fruit game isn’t something extraordinary or unexpected. But, not all fruit slots are created equal, and we’re talking of no ordinary game either. That’s right, Fruit Blox slot is no ordinary fruit game.

Fruit Blox slot is a game by Red Tiger Gaming, a company that may not be as renowned and as popular as NetEnt and Microgaming, but they have developed quite a few exciting games over the years, including Chinese Wilds slot, Jack in a Pot slot and many more. While many providers create games that resemble each other, Red Tiger Gaming are quite original and their games are only similar in terms of settings and functionality, but they are not that alike in terms of gameplay.

Fruit Blox was released in the summer of 2018, and come to think of it, it completely makes sense to release a fruit-themed game during the summer. The game layout is not standard, the game has six reels and four rows and the maximum number of coins that you could win is 10,000.

How To Play Fruit Blox Slot

Before you can spin the reels of Fruit Blox slot, you will need to select your wager. And since there are almost 4,100 paylines, it is understandable that the wager isn’t set per line, but instead you choose your total stake per spin.

Wagering starts at 20p per game, which is pretty much standard, as the minimum stake on most slots is about 20p. The stake could go up to £10, which is a pretty low maximum stake limit, considering that on a number of games you can wager as much as £100, £200 or even more.

The potential prizes that you can win reflect your wager, so if you increase your wager you can expect higher winnings. The stake is controlled via the button that says ‘Total Stake’. In addition to these buttons, the game also features an ‘Auto’ button and a turbo button. Using the auto button you can set the reels to spin automatically up to 100 times max.

In addition to setting a number of spins, you can also set a loss limit and there are few other autoplay settings, like selecting the reels to stop spinning if your win exceeds a particular amount and so on. Last but not least, the game also features a sound button that you can use if you wish to toggle sound effects and music off.

How To Win Fruit Blox

You will need a cluster of symbols for a win on Fruit Blox and the symbols have to be aligned from the leftmost towards the rightmost reel. The winnings are displayed in relation to your total wager, not the stake per line. The minimum win is 0.1 times your wager and that’s the amount that you’ll receive for a combination of three lemons or three cherries. Symbols that form a winning combination have to be aligned across at least three reels, you won’t get a payout for a combination even if there are three or more symbols aligned across only two paylines.

Although standard fruity games came with no bonus features, Fruit Blox slot is a modern game, so it includes a modern slot feature as well – Free Spins. If you get more scatter symbols on the reels, more free spin will be awarded. These symbols are tile symbols, so a single tile can award a maximum of four spins.

The maximum number of free spins symbols is three mega tiles, and if you get that many tiles you will get to play 20 Free Spins.

If you like retro games with a modern design, then we have a pretty strong reason to think that you’ll like Fruit Blox slot, not the least because the game RTP is set at 96.23%.

Fruit Blox is available at many of our featured sites, so register today, claim your bonus and you can start playing this slot and many more right away!