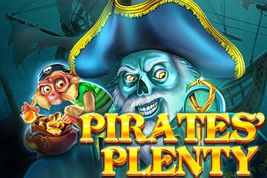 If you are interested in a pirate adventure, then you are at the right place. In this review we will talk about the exciting Pirates’ Plenty The Sunken Treasure slots game which is developed by Red Tiger Gaming. Set your sails and enjoy this treasure hunt with us!

At first you will be welcomed by the dead pirate and his monkey, and they will invite you to a gold treasure adventure.

Also, before you even try to play this online video slot, you will be presented with all of the features in this game, as all you have to do is to scroll on the sides of the welcome page of the game, and soon you will find out all the wilds, the bonus features, the symbols, paytable and so on.

In order to start the game, you will have to click on the “Start” button and the game will start.

The gameplay is set in the inside of a boat and as you will probably notice, the gameplay is set on a 5x3 grid. This is a high variance slot game with an above-average RTP rate of 96.12%, and as you can imagine, the online slot provides you with lot of winning opportunities if we consider the bonus features.

Oh, and one other thing, this video slot has 20 paylines, so there will be plenty of winning opportunities for you to land great prizes.

Although this game seems complicated at first glance, as you get to know this video slot it will seem less and less so. Basically, it is a straightforward one, as the developers have made sure that players won’t be having any problems with Pirates’ Plenty The Sunken Treasure Slots.

Having said that, the first thing that you need is to set the desired stake that you want to play with in this online slots game. You can set the stake per spin with the “Stake” button that is visible on the lower part of the screen. The lowest stake with which you can play in Pirates’ Plenty The Sunken Treasure Slots ис £0.20, while the maximum that you can stake per spin is £20.00. So, from this, you can see that the game is suitable for small-budget players as well as so called high-rollers.

Before you start the game you can scroll and see all of the features in this game. As you can probably imagine, the game revolves around pirates, so the symbols are connected with that.

The symbols in this online slots game are divided in two categories: low-valued and high-valued. The low valued ones are gold coins that represent the four card suits including Hearts (red), Spades (black), Clubs (blue), Diamonds (green). The high valued symbols in this online slots game are on theme and revolve around the subject about pirates: rum, guns, cannons, skull symbol and so on.

Another symbol that deserves the attention is the Wild Monkey, since it has a special power – to steal all of the low paying symbols that appear on the reels, and provide you with an extra spin opportunity with the remaining symbols.

The Wild Ships feature is introduced by the unlocked Treasure Reel, and then you will have the opportunity to land extra tall Wild symbols which may cover the entire reel on any spin. They also can appear with multipliers.

The Wild Monkey feature is triggered when you manage to land this particular symbol, as all of the low-paying symbols from the reels will disappear, allowing the other more lucrative symbols to take their place. The removed symbols will remain in place. This feature can appear at any time except during the Ocean Spins feture.

There you have it! Our review on this exciting pirate slot game. We must say, it is a very dynamic slot game, with many bonus features that could be very lucrative.

Want to go on a treasure hunt? Play Pirates’ Plenty The Sunken Treasure Slots at one of our partner casinos and enjoy your welcome bonus!

Pirate From The East

Riders of the Storm