Launch The Equalizer and experience a neon-lined futuristic slot game with five reels and rows that can expand from four to six. The game 15 paylines which can expand to 30 and from there on these can become the full 60 paylines for a moment and for a number of turns. The Equalizer has a 10 free spins bonus feature and two symbols that can pay 1500x on the line bet, with a multiplier of 96.08% 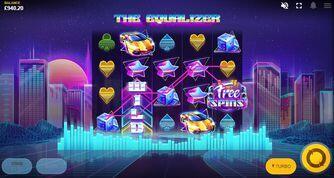 Enter the neon world of full system sound and a potential prize of 10,000x on The Equalizer slot. The game has a free spins bonus feature, expanding wilds, expanding reels and rows and one absolutely stunning gameplay.

One look at this Red Tiger Gaming slot game and we can't help but see the design concept of Neon Staxx. And that isn't a bad thing. The Equalizer is filled with action. Each symbol is animated and the high-paying symbols spring to life in full splash when part of a winning combination.

What dominates the layout is the style. We can't really compare this and Neon Staxx for their style of play, bonus features and other gameplay points, but what we have as a highlight in both is that everything has been made in the style of neon lights.

So just from the start we have a theme that is as exciting as it is fun to play. Start the reel action with the press of the spin button - a big, round and yellow thing in the bottom right corner. Choose to toggle to 'turbo' mode on, which will cause the reels to turn and stop sooner than later.

How to Play The Equalizer Slot

Before anyone sets the reels going though, we should check out the bets of The Equalizer slot first. Use the button labeled Stake in the bottom left corner of the page to select from a range of bets. The smallest available bet is just £0.20 per spin and the other end of the range states £10.00 for the maximum wager.

How to Win the Equalizer Slots

The game's paytable is located in the menu which can be accessed from the three-dash symbol in the top right of the screen. This is where the players will discover all of the symbol pays, details about the bonus features and how these are triggered, and other gameplay information.

The most valuable symbol is the hot car and pays 1500x multiplier by the line bet when seven matching symbols appear on the reel-set. This symbol is followed by the diamond, paying 900x for the lucky outcome of seven of the same and by the blue dice  and the BAR symbol.

The wild symbol is represented by the letter W and this is the second most valuable symbol. Not only does it 1500x on the line bet, but it also expands to cover as many as six positions on the reel-set, on each reel.

Besides the multiple high-valued symbols the game offers a jackpot prize of 10,000x multiplied by the winning line bet.

The bonus feature represents several features, The Expanding Wilds is one of these. A random occurrence, a wild symbol may be stretched to cover as many as six vertical tiles on the reel set. It may be that more than one such expanding wild visits the reels, which means the chances for a bigger win become increased.

Next comes the random feature of slot expanding. The feature causes one horizontal and one vertical disk to appear on the reel-set, sending a powerful beam which expands the rows and reels to a maximum of seven reels and six rows, from the starting five reels and four rows.

And lastly, The Equalizer free spins bonus occurs when three or more free spins symbols land anywhere on the reels. The reward is ten free spins and during this feature the Expanded Wilds and Expanded Slot features will remain until it's over. If the speakers emit a sound powerful enough, the expanding wilds may nudge to the left or right, thus increasing the chances for a win.

The game's theoretical return to player outcome is 96.08% which is one percent above the average. This translates to £96.08 in the example of £100 being bet over an indeterminate period of time. A big win wipes away that percentage as it can become much greater for the luckiest players out there.

Our The Equalizer Slots Overview

The game has an amazing combination of all three features. The expanding wilds can cover more lines when they have expanded to the top and the nudging feature causes them to stay on the reels longer. The interplay of all of these features during the free spins is a lucky event, but one that can result in amazing winnings as the party goes on to some club tunes coming from the speakers.

Play this and many other new and classic slots at one of the online casinos. Claim a welcome offer right from this page.