The players can discover a reel set of three rows, five reels and nine always active paylines. Naturally for the layout, payouts are made with three or more matching symbols and bets are as low as 10p per spin. The theoretical return to player is 96.16% and the variance high, which means the game has a big win potential, as payouts can be up to 5555x from a single spin. 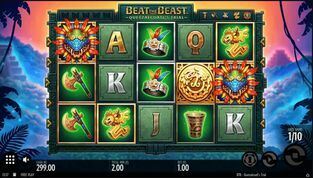 Thunderkick has added another game to their Beat the Beast saga. Part of the company, in addition to the Cerberus, Kraken and Sphinx now is the Mesoamerican deity known for its luminous feathers and mysterious powers: Quetzalcoatl. The game repeats the look and feel of the previous slots in the series but the reel adventure is still decent and the payouts potentially lucrative.

Beat the Beast: Quetzalcoatl’s Trial slot is a marvelous display of ingenious graphic design and a stellar payout system that can generate surprise rewards for some lucky players. The game comes with a wild symbol, in fact, stacked wilds, as well as a bonus symbol that can trigger the free spins feature. The meter in the upper right corner of the screen is filled with five winning symbols at the most and that generates kickbacks.

When it comes to graphic design, there isn't much regarding the look and feel of the game to distinguish it from the other slots in the same series.

Players will find green tones throughout the reel adventure, which reflects the jungles of Mesoamerica, as these surrounded the famed cities such as Tikal, Teotihuacan and Zaculeu. The symbols are the inventory of medicine men: feathered crowns, golden discs, axes, chalices with mysterious potion and so on.

Beat the Beast: Quetzalcoatls Trial slots can get quite lively. There are moving parts and animated symbols that can create dynamic gameplay. Each winning outcome is marked by glowing symbols but the most pleasant sight we'd like to see more of are wins with the Quetzalcoatl, as this symbol springs to life in all of its marvel.

How to Play Beat the Beast: Quetzalcoatl’s Trial Slot

Playing the game requires setting up for the reel adventure ahead, which means, finding your war around the reel set and selecting your bet. The slots experts at Thunderkick have included all of the settings and controls buttons in the bottom area of the screen.

From left to right, players will find the buttons for the menu, sound, bet, autoplay and play. Between there are three windows that display the current balance amount, the latest win amount and the active bet.

To spin the reels on Beat the Beast: Quetzalcoatl’s Trial slot you need to press the bigger of the three round buttons in the bottom right area. This causes the reels to spin once per the active bet amount.

Another way to play the game is by selecting the Autoplay option. This enables players to appoint the number of automatic spins and add optional controls that can keep the balance from dipping below a certain point, or to receive a prompt when the bonus feature has been activated.

In terms of the bets, players can play Beat the Beast: Quetzalcoatl’s Trial with as little as 10p per spin. To change the bet press the poker chip button and select your amount from the table. The maximum bet in this game is £100.00 per spin.

How to Win Beat the Beast: Quetzalcoatl’s Trial Slots

Winning in the game requires winning outcomes with at least three matching symbols. The game's nine paylines may not seem like many, so thankfully there is a wild symbol that substitutes for all symbols, except the bonus/scatter, and there are serious payout values for each symbol.

Especially with wins of five of a kind, players can get in return some amazing amounts when playing Beat the Beast: Quetzalcoatl’s Trial slot. The most valuable symbol is the feathered serpent itself. Five of a kind pay an amazing 250x, but as knowledgeable players may suspect, this is an extremely rare thing to see.

On the other hand, payouts with the other picture symbols are possible more frequently than with the top symbol. Five statuettes pay 50x multiplied by the bet, the crown pays 40x, the axe 30 and the chalice 25x for five matching symbols.

The game comes with more than one extra feature. Foremost is the free spins bonus, which is a retriggerable event that initially starts with three bonus symbols and 10 spims. Each three bonus symbols add another ten spins. The kicker comes with the wild symbol. Each time you get five to land on the meter, the game upgrades one of the low-paying symbol, so that it is removed from the screen. Also, each time the meter is filled, the game adds two wilds to the tally.

The game is available in free play mode at online casinos that enable this, so that players can try the game for free and get a feel for the gameplay and features.

All of the games in the series are playable, but it feels that this edition has more punch in it. The symbol payouts are better and the bonus feature is also a joy to behold as it can upgrade all symbols in case of a lucky streak, and that could mean a big win.

Claim a welcome offer from this page and discover Beat the Beast: Quetzalcoatl’s Trial slots at top-rated online casinos.