Don't run away from the sea monsters in 1429 Uncharted Seas slot - embrace them instead and end up a winner if one or more expanding sea monster wilds connect with the rest of the symbols. This slot pays a maximum of 670x on the bet from a single spin and offers up to 50 free spins from five bonus symbols. A high RTP low volatility could mean something to lots of players out there. 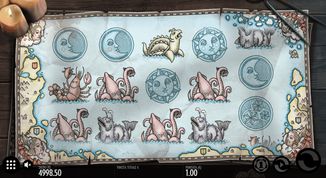 Sail aboard a glorious ship and play for a chance to win up to 670x on the winning bet on 1429 Uncharted Seas slots.

A voyage onto (supposedly) uncharted seas changed the world forever when Christopher Columbums touched ground on the western hemisphere.

That was in 1492, but the 1429 Uncharted Seas slot takes us some decades before that on a made-up adventure filled with expanding sea monsters and sea-faring symbols. So pack your astrolabe and climb aboard to discover the potential winnings in this online slot by Thunderkick.

When it was released in 2014 the game became favorite to so many online slots players because of two things: high theoretical return to player and low volatility. Besides these accolades, 1429 Uncharted Seas boasts few symbols that can pay decent amounts relative to the winning wager.

The payouts are made with three or more symbols of the same kind that fall on one or more of the game's 25 paylines. These paylines are always active so no matter how much the bet, it will always play across the 25. Besides the basic characteristics, what is unique about this game is the wide gap in the payouts between the most valuable symbol and the next in line.

Nevertheless, the emerging wilds on the middle three reels is a more glorious detail.

The slots experts at Thunderkick have made one of the most original games in terms of graphics design. A reel-set surrounded by islets, peninsulas and isthmuses which represent new lands waiting to be discovered. The premise of the game and the graphics fit like hand in glove and the symbols are equally charming.

Win outcomes are't marked by animated splashes but that doesn't make the game dull. The only thing that moves in 1429 Uncharted Seas slots is the sea monster wild. There are few beautiful seafaring-themed drawings, such as violent and calm seas, that are displayed following events in the game.

A landscape of seafaring sounds and trumpet fanfares mark the musical end of things, and this fits quite well in the gameplay.

How to Play 1429 Uncharted Seas Slot

It is a familiar Thunderkick environment so players who've played a couple of games from this provider will know their ways around.

The spin button is in the bottom right corner of the screen and to the left of it is the autoplay button To send the reels spinning once use the spin button, but for a continuous reels-work configure the autoplay setting.

The bets can be selected from a range of amounts. A poker chip button opens up the board where the smallest bet is only ten pennies per spin, while the maximum bet in 1429 Uncharted Seas slot is £100.00.

If you don't want to hear any trumpets and the sound of wind rustling a taut flag, you may toggle the sound off from the speaker button in the bottom left corner.

The paytable is tucked behind the menu button. This is where you can view the symbol payouts and other details pertaining to the gameplay.

How to Win 1429 Uncharted Seas Slots

Payouts are made with three or more symbols of the same kind and there are three standard symbols that pay 10x or more on the winning bet.

The range of bets and the high theoretical RTP has made this title much sought-after. On the other hand 1429 Uncharted Seas having only one extra feature may create the impression that it doesn't offer much, however the expanding wilds can make all the difference. After all, the RTP of 98.60% makes the game perfect for low to medium stakes gameplay because the low volatility translates to higher wins being too far apart, but low and medium wins should ring out more often.

The most lucrative in this department is the siren when it stops in five positions on a payline. In the event, the prize is 50x the bet. The turtle monster pays 10x and the giant squid does the same amount.

Another set of monsters exist on 1429 Uncharted Seas slot, a lobster and some sort of a mollusk, pay 6x. The rest of the symbols are the sun, the moon and the stars, all of which bring amounts of 3x multiplied by the win.

Two symbols can make all the difference in the game. The sea compass symbol triggers the free spins bonus. It can fall on any reel and stop on any position with three or more.

The wild is represented by a boat, underneath which lies a Loch Ness type of a sea monster. When the wild stops on the reel it will expand. This symbol appears on the middle three reels only and expands only if it is part of a winning outcome.

Thunderkick are known for hosting their online slots at demos at casinos that provide free play slots to registered players. It's been awhile since the game was released so your best bet to play it is by claiming a welcome offer and playing with bonus or real money.

The game has enough going on. Not too much, but just enough so as not to bore anyone out of their mind. The rising (expanding) wilds are the defining feature and can result in big wins. A nice touch comes with the graphics, which are light yet fun to watch.