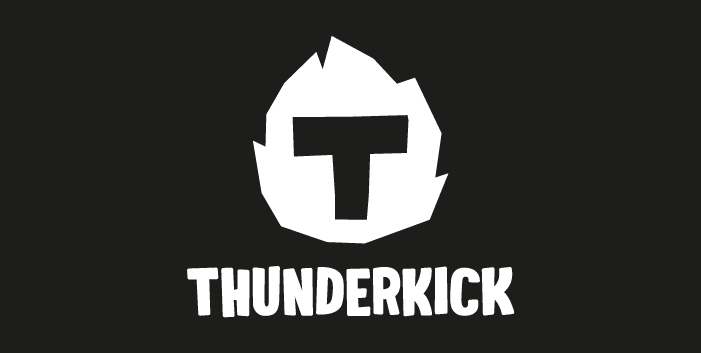 Thunderkick is one of the more well-known and successful video slot developers right now, which has proven itself countless times over the years. They offer lots of lively and vibrant games, and you can read all about them in the in-depth review below. Once you’ve done reading, try playing some of the best Thunderkick slots!

Lost City of the Djinn

Lost City of the Djinn

Everything You Need To Know About Thunderkick

Our Verdict on Thunderkick

One of the best things about Thunderkick is the exceptional quality of its games. They revolve around really creative and exciting themes, and on top of that, they come with some incredibly colourful designs, which only make the gaming experience that much more immersive and entertaining.

This company does not disappoint when it comes to its video slots in any aspect. We already mentioned the visual quality of the games, but that is not all. You can also expect some really worthy and valuable prizes to be won, with some of them going as high as 25,000x the stake.

Thunderkick is a brilliant Swedish company with headquarters in Stockholm. It was established back in 2012 and it quickly climbed the industry ladder to become one of the better-known names in the industry. This was achieved thanks to the vibrant and dynamic nature of their video slots.

This company received its first license in 2013 from the Malta Gaming Authority, and that same year it was also licenced by the UK Gambling Commission, which opened the door to the UK market. Recently, Thunderkick’s incredible work was also recognized and licenced by the ONJN, which is the Romanian National Gambling Office.

The thing that makes Thunderkick slot stand out from the crowd is the fact that the games the developers come up with are extremely creative in terms of visual design, themes, gameplay, and bonus features. They provide an entertaining and sometimes even action-packed experience, with lots of potential prizes.

A company that was established back in 2012 is still relatively new, but you are probably expecting an incredibly lengthy portfolio. The thing about Thunderkick is that its main goal is quality instead of quantity, which is why their portfolio has about 50 video slots so far, as opposed to other software developers.

Thunderkick is a developer that focuses on video slots, which is exactly what their portfolio is made up of. The creators of these games pour all of their creativity on video slot games, so don’t expect any blackjack or bingo-type games.

On top of that, no jackpot games have been created yet either, but what you can look forward to are games with really big maximum win potentials, which as we mentioned before, can reach up to 25,000x the stake.

These video slots are easy to understand, in terms of rules and there is nothing overly complicated. They offer really impressive visual designs, which is very captivating and always in accordance with the theme of the game. The games are also praiseworthy for their immersive soundtracks, which make the experience much more enjoyable.

If you are for some reason still unsure whether to choose a Thunderkick release for your next slot adventure, you should also be aware of the fact that all of their games come with a high RTP value, which is oftentimes well above the industry average of 96%.

To wrap up this section of the review, we will just say that all of the Thunderkick video slots come with vibrant colours, engaging and sometimes action-packed gameplays, and many exciting bonus features, which are sure to win you over in no time.

Thunderkick’s video slots cover lots of different genres, from rock-themed to mythology-themed games and everything in between. They also have a very successful slot series, called Beat the Beast, which has several instalments already and they all focus on a different fantasy beast. Their games offer great volatility models as well.

One of their most popular games is Pink Elephants, which also has a sequel. Their other famous slots include: Beat the Beast: Mighty Sphinx, Cosmic Voyager, Midas Golden Touch, and Fruit Warp.

Pink Elephants slot is probably Thunderkick’s most famous and successful game, which is usually among the top of the charts. It is based around the story of Dumbo and the fact that it offers up to 4,096 paylines makes it very appealing to players. Plus, you can win up to 8,200x the stake.

Beat the Beast: Mighty Sphinx slot belongs to the slot series we mentioned above and it will let you enjoy a really incredible Egyptian adventure in which you can walk away with the valuable treasure guarded by the sphinx. You can utilize free spins and there is also a great RTP value of 96.14%.

Cosmic Voyager slot will take you on an unforgettable space journey with a mysterious being. You will immerse yourself in the stars and galaxies, while the expanding symbols and the excellent free spins can help you win the top prize of 5,000x the stake.

Midas Golden Touch slot is an award-winning video slot, which will introduce you to King Midas and you can use his golden powers to your advantage and earn massive prizes. The game offers free spins, sticky respins and many more surprises, so check it out first-hand.

Fruit Warp slot is one of the most unusual and unique games in Thunderkick’s portfolio. You will not find any classical reels in this game, but instead, it relies on very exciting portal features, which makes it an incredibly innovative game, with lots to offer.

Thunderkick’s games can be played on any device, including desktop computers, laptops, tablets and mobiles. All of their games are made with HTML5 technology, which means they are compatible with all major operating systems. You can enjoy the same graphics and visuals on any device, regardless of where you are.

Thunderkick is strictly a video slot developer, which means that if are looking for different types of games, you won’t be able to find any in their portfolio. However, the fact that it focuses only on a single game type has made this company an expert in the field, and they know exactly what to include and how to design these games in order to bring you a spectacular and potentially very rewarding gaming experience.

As we explained previously in greater detail, Thunderkick’s video slots cover all sorts of themes, which means that there is something for everyone. You will come across very innovative and possibly lucrative bonus features that will definitely make the games a lot more exciting and thrilling. Check out their games today and enjoy everything this developer has to offer.

What types of slots does Thunderkick offer?

Thunderkick focuses on video slots only, so there is no blackjack, roulette, or any other types of games in their portfolio. This allowed them to perfect their craft and thus create high-quality slots.

Which are the most popular Thunderkick slots?

Thunderkick has created many incredible video slots that are in high demand around the world. Some of their most famous releases include Pink Elephants, Beat the Beast: Mighty Sphinx, Cosmic Voyager, Midas Golden Touch, and Fruit Wrap.

Safety is guaranteed, as this company is licenced by a few authorities, which include the UK Gambling Commission and the Malta Gaming Authority, as well as the Romanian National Gambling Office.

The slots are made with HTML5 technology, which makes them fully compatible with any mobile or tablet device. This means that you can enjoy the same high quality on smaller screens as well.