The fearless Gemma continues her quest on magical destinations to find precious gems in the new online slot from Thunderkick. This time she’s heading to a frozen winter wonderland where you’ll play on 6 reels and 4,096 paylines. Gameplay highlights include mega symbols, avalanche wins, increasing multipliers, and free spins with wild explosions. This high volatility slot game can deliver you payouts of up to 15,000x the stake. Find out more in our in-depth Crystal Quest: Frostlands Slot Review. 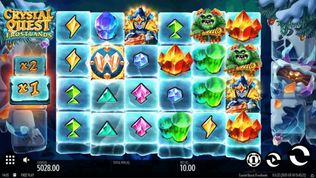 Frostlands is the third slot machine we get in the Crystal Quest series from Thunderkick, following after Deep Jungle and Arcane Tower. In this instalment, the explorer Gemma is back for another reel adventure that takes place in a much colder region compared to the previous two. If you’ve played the previous slots in the series, you will have a strong opinion on what to expect in this game. This highly volatile reel journey is accompanied by cascading symbols, expanding multipliers, mega symbols, and a free spins round that can lead to wins of up to 15,000x the stake. 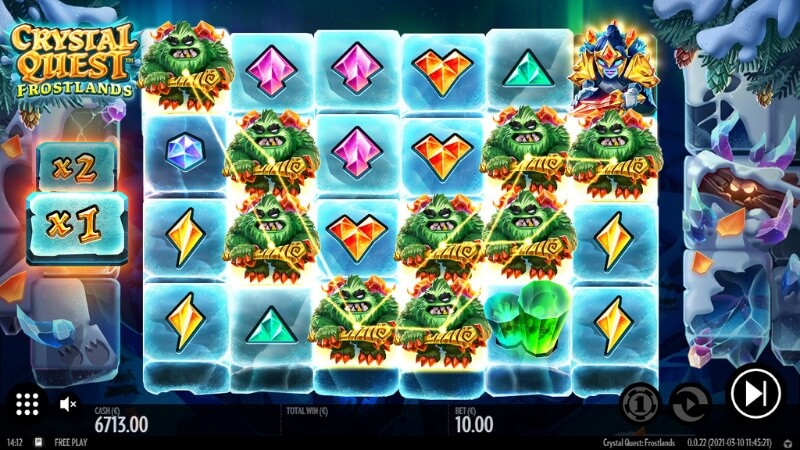 The Crystal Quest: Frostlands slot plays on 6 reels, 4 rows, and 4,096 paylines. You can choose your preferred bet level by pressing the coin button on the right corner below. The game accepts various betting options that range from £0.10 to £100 per spin. In order to win, you need to land 3 or more matching symbols across a payline, starting from the leftmost reel. In total, you can win 15,000x your bet from a single spin, if you manage to trigger the bonus round. This slot game with icy reels is packed with wild substitutions, cascading symbols, multipliers, supersized pay symbols, and a free spins round with wild explosions. 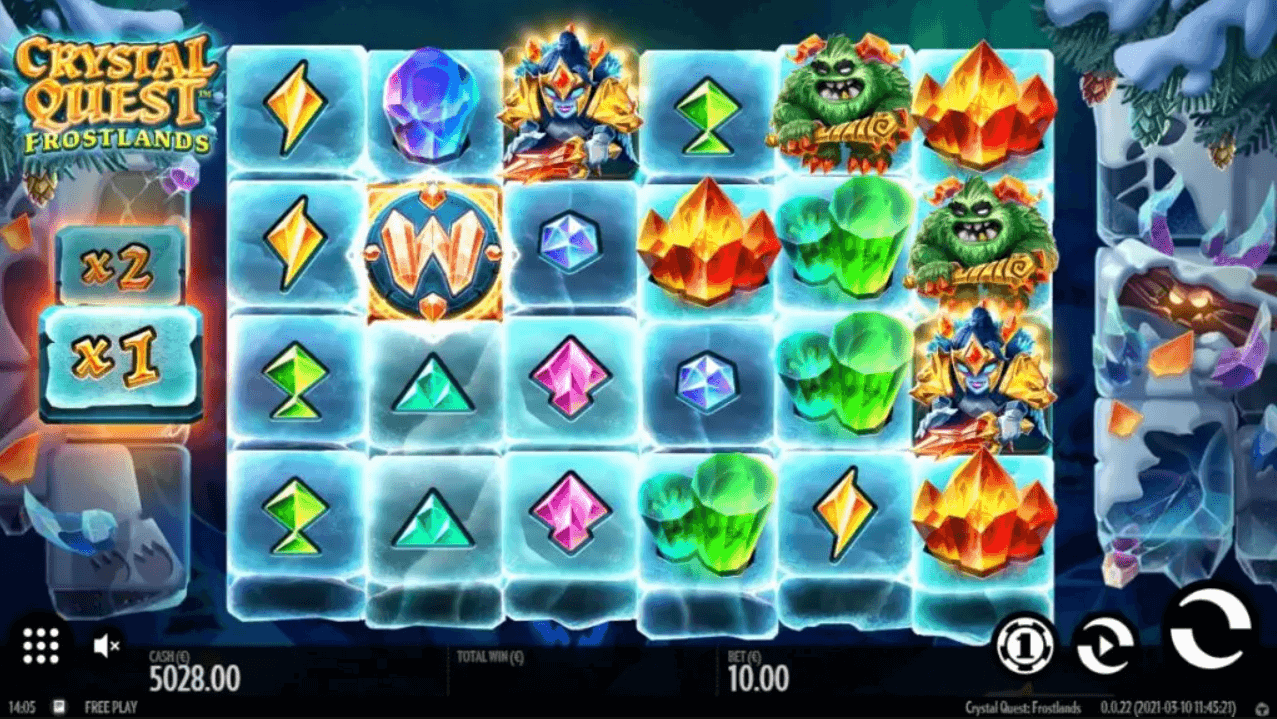 The Crystal Quest: Frostlands slot comes with the well-known layout from the other games in the series, but with a different theme. This time, we’re taken to Frostlands, a frozen fantasy forest with many treasures. The reels are covered in snow and there is an ice cub ladder on the left side that displays the current win multiplier. As usual for a game from Thunderkick, here you’ll find a top-notch design with quality graphics and rich visuals.

The six reels are made of different symbols placed on ice cubes. The lower-paying symbols consist of gems in blue, turquoise, green, yellow, orange and pink colours. The medium-paying symbols are crystals in blue, green and orange colours. Finally, the highest-paying symbols are Yeti and the Feral Commander which is the most lucrative symbol. It pays 5x your total stake if you land 6 on adjoining reels. What’s more, there’s a wild symbol that can replace all regular symbols when it makes part of a winning combination. The treasure chest symbol is the scatter which triggers the game’s bonus round.

The fantasy icy world in the Crystal Quest: Frostlands slot comes with an RTP of 96.16% which is slightly better than the industry average. The variance here is high, and on the scale of 1 to 10, the developer put it about 8.5. This means that you should expect less frequent, but bigger winnings. The potential maximum win that you can take from a single spin in this game is 15,000x the stake, which can be achieved through the bonus features. If you want to learn more about different volatility and RTP slot models, check our guide about Variance, Volatility and RTP in online slots.

In the Crystal Quest: Frostlands slot, we get to visit a wonderful winter wonderland that is home to a wide range of extras. You’ll find avalanche reels, multipliers, massive symbols, as well as free spins with exploding wilds. Let’s go through the features and see how they work.

Like other slots in the Crystal Quest series, the Crystal Quest: Frostlands slot comes with the Avalanche feature, also known as cascading reels or tumbling reels feature. When you land a winning combination, the Avalanche feature will trigger and will remove the symbols involved in the win. This will make a space for new symbols to land and hopefully, they will help you form another winning combination. The avalanches keep on as long as you land new winning lines. 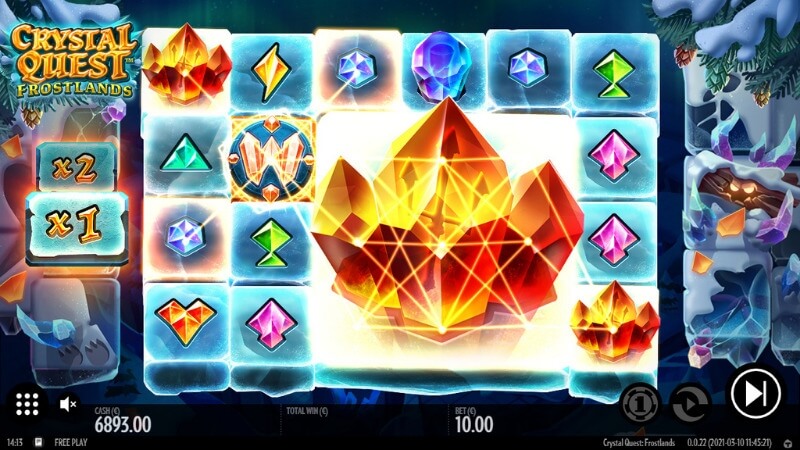 While in other slots you can get mega symbols only in bonus features, in Crystal Quest: Frostlands you can land the so-called Massive Symbols at any time, both during the base game and the bonus game. The Massive Symbols can appear in 2x2 or 3x3 formations, which are the equivalent of 4 or 9 standard symbols. They will always land at the bottom of an initial avalanche and will crush all symbols underneath them. Plus, they will help you to easily form more new winning combinations and benefit from avalanche wins and progressive multipliers. 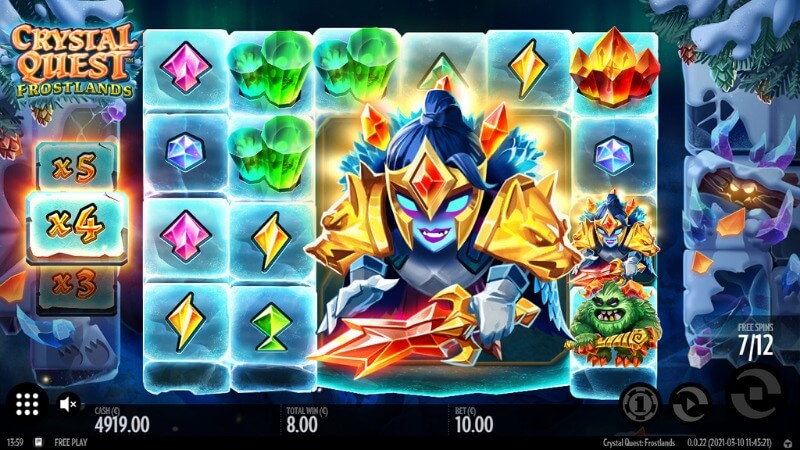 When you land 3 or more treasure chest scatter symbols anywhere on the reels on the same spin, you’ll trigger the Bonus Game feature. You’ll then win 12 free spins and any additional scatter will give you a further 3 free spins. Once inside the bonus game, you can manage to win even more free spins, if you land at least 2 additional scatter symbols. And as we’ve mentioned above, the Multiplier feature is active during the bonus game and the multiplier won’t reset after a winless avalanche. Also, you can benefit from Massive Symbols, just like in the base game.

But, that’s not all - during the Bonus Game, you’ll also have the opportunity to trigger the Wild Explosion feature. It comes into play on a free spin that doesn’t deliver a winning combination and there’s a wild symbol on the reels. Then, the wild will explode and remove all the symbols from that row and column. This makes place for new symbols to land and hopefully form a winning combination. The Bonus Game ends when you run out of spins or hit the maximum win cap of 15,000x your bet.

The high-end design of the Crystal Quest: Frostlands slot also works great if you play in on a mobile or tablet device. The game is built with HTML5 which makes it optimised for all mobile operating systems. The gameplay and its bonus features work seamlessly when playing this game on smaller devices.

Thnderkick is an innovative slot developer that has distinguished itself with unique designs and gameplay for its slot games. We’ve already introduced you to the Crystal Quest series of slots from this developer, but there are many other games that deserve our attention. For example, the Big Fin Bay slot takes you on a fishing adventure where you’ll benefit from wilds, scatters and free spins for a chance to win 15,040x your bet. Or, check the Cosmic Voyager slot and travel to the galaxy to experience a world we know so little about. The game comes with expanding symbols and free spins that deliver a top-notch experience. Finally, you can play the Beat The Beast Griffin’s Gold slot and take part in another Thunderkick’s series of slots which comes with a big win potential of more than 20,000x the stake.

As a conclusion to our Crystal Quest: Frostlands Slot Review, we can say that Thunderkick succeeded in creating another successful slot game from a series. What makes this game great is the wide range of features and extras. The gameplay in the Crystal Quest: Frostlands slot is similar to what you’ll play in the Arcane Tower slot, but here the Linked Reels mechanic has been replaced with Massive Symbols. If you’re familiar with the Crystal Quest series from the beginning, this game is certainly an instalment you have been waiting for. So put on a warm jacket and get ready for a frozen reel adventure with big wins!

Discover the Crystal Quest: Frostlands slot by claiming a welcome offer right from this page and play at top-rated online casinos.