Play on up to 99 playlines Esqueleto Explosivo 2 for a chance to trigger the free spins bonus and a few other extras, such as the exploding wild. The game has the consecutive reels pay mechanism with avalanache wins, which means, more than a single win can occur from a single spin. The game is reputed for working itself up into a frenzy of consecutive payouts, especially during the free spins bonus. Players can win prizes of up to 5000x from a single spin. 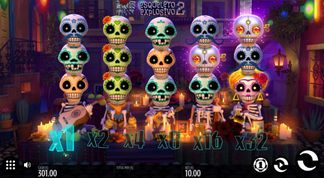 Re-discover a famed online slot in the Esqueleto Explosivo 2 slot with its maximum potential win of 5000x on the bet.

Take tacos, or diamond-studded skulls, add multipliers, free spins and you've got yourself a killer Mexican-themed online slot. Thunderkick are back with the second installment of the Esqueleto Explosivo slot. The theme's familiarity remains but the gameplay and extra features are much improved.

Those funky day of the dead costumes and the skulls that top them can line up for symbol wins consisting of three of a kind, or more, on a reel-set of three rows and five reels. This isn't your typical payline slot.

Not only does Esqueleto Explosivo 2 slot play across 99 paylines, it also offers cascading/avalanche wins where the players can make more from a single spin on this game, then from a succession of spins on the majority of the rest of slots out there.

The game packs a wild symbol in the guise of Explosivo Wild, which has a kicker attached to its appearance. And unlike the first game, this one comes with a free spins bonus.

It is very rare that a game that's been released five years ago gets a sequel this late. Usually, gaming producers use the momentum to churn out a slot immediately following the success of its progenitor - only to achieve shortfallings because of a rushed job. With Esqueleto Explosivo 2 this isn't the case.

Thunderkick are well-known for making slots that have memorable graphic design. This is definitely true about the slot at hand. With crisp graphics and attention to detail, the slots experts take us to a ciudad pequeno for a ride on the five reels and three rows. The city is in the background and the festivities are taking place right in front of us.

All of the symbols are skulls with different expressions and qualities to them. There is a golden, grinning skull with a flattop boogie with a mullet for hair, a knocked-off tooth skull, the guitar player, the lady with a Frida-like do and so on.

Each of the Esqueleto Explosivo 2 slots symbols are animated and bring the game to life more than it already is, so it will be an exciting time on the reel-set regardless if you take a casual approach or you take the game as it goes.

How to Play Esqueleto Explosivo 2 Slot

It's a familiar environment to most other releases by Thunderkick. All of the ontrols are in the bottom, on a stretch below the reel-set. In the bottom corner is the play button, the autoplay and the bets.

Press play to send the reels spinning once. Press it again and they do the same again, deducting the selected bet once for each turn. If you want the game to make the spins on its own, select the autoplay option.

This enables players to configure Esqueleto Explosivo 2 slot for the automatic spins mode. It is optional to add stops, such as on a single win amount or total balance decrease amount, which helps mind the balance.

Bets range between £0.10 for the smallest and £100.00 per spin for the maximum. The bet amount is the multiplier for the number of matching symbols on a payline and each of these values can be seen in the paytable, accessible by selecting the menu button in the bottom left corner.

The game's 99 ways to win pairs very nicely with the game's dynamics. Players can see payouts made with two symbols starting on reel one and another matching symbol on the second reel. If a wild appears on the third reel the payout is going to be even greater. To the benefit of inreased chances are the extra features, such as the Mucho Multiplier.

How to Win Esqueleto Explosivo Slots

Payouts can occur on as many as 99 paylines, however this is only possible as the wins progress. The starting number of paylines is 17 and wins are made of three or more matching symbols starting from left to right and occurring on consecutive reels horizontally and diagonally.

Not surprising are the meagre symbol payouts, but that is not to say that the payout resulting from is single spin is going to be meagre too. The highest-paying symbol is the lady skull, with 5x on the bet for five of the same.

Thankfully, Esqueleto Explosivo 2 slots can spur on consecutive wins and the extra features can help the amounts soar higher.

Defining feature of the game are the cascading/avalanche wins. Each win results in a multiplier. The maximum is 32x on the concurrent win, which is the seventh consecutive win, regardless of the symbol's value.

A wild can come into place to substitute for any of the game's symbols, except for the bonus. It only lands on the middle three reels. The wild explodes and takes out between three and eight symbols that belong to the lower pay category.

A free spins bonus is the one major change compared to the first Esqueleto Explosivo slot. The bonus spins are triggered with three, four or five symbols, which turn up 10, 12 and 14 spins respectively. Scatters that land on the reel-set add free spins. The highest multiplier of x32 is available only in the free spins bonus.

The game has a theoretical return to player that is slightly above the average. It is very possible that the RTP goes up during the Free Spins bonus because that is where players have a chance at scoring the biggest payouts. The RTP is officially listed as 96.13%, which is most likely valid for the entirety of the gaming experience, base game wins and bonus features combined.

It is questionable whether the game will be released as a free play slot, but we’ll wait and see once the initial hype has subsided. It is almost certain that well-placed casinos that hold demo games will have it as such.

The game offers a maximum payout of up to 5000x on the winning bet and this can result from a single spin. Overall, it is an improvement from the original game and one which the players will appreciate the high variance, compared to the low variance in Esqueleto Explosivo.

Is there a possibility for Esqueleto Explosivo 2 to trigger a big win?

The game comes with the cascading wins payout system and has a free spins bonus. Players can get the game to trigger multiple times, but there is also a multiplier that can increase any win amount. The biggest multiplier value is 32x the win.

Can you play Esqueleto Explosivo 2 as a demo?

This is a game by Thunderkick, who is known for releasing their games in practice play mode at online casinos that allow players to try slots for free.

Our review of the game covers details about the free spins bonus, how multipliers trigger, the Esqueleto Explosivo 2 RTP, payouts and more. The review provides information that some players find useful to make a decision whether this is the slot game to play versus another game based on this information.