The players will find that Pink Elephants 2 slot takes much of the same from the original game. The elephant is again the most important symbol as it can occur in clusters and pays the biggest amount. A free spins game is available, along with the symbol upgrade meter and all this plays towards a maximum potential win of 10,000x. 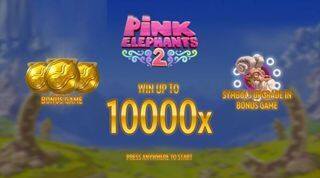 The slots experts at Thunderkick are back into the game of elephants, this time around offering the Pink Elephants 2 slot, at which the lucky players can win up to 10,000x multiplied by the winning bet.

The layout brings the same configuration of reels and rows like on the original Pink Elephants slot that was released in 2017. What is also the same is the number of ways to win: 4096 and this makes for a very exciting reel adventure.

Win outcomes are made on consecutive reels which must begin on the leftmost reel. Three matching symbols are needed for the basic wins and six of the same for the optimal winning outcomes. The game offers a set of features which includes the memorable free spins bonus.

Thunderkick are responsible for making one of their most memorable games, and we are talking about the first edition of the present game. That game was lively and offered enchanting displays of wins and features. The present game doesn't offer a great improvement in terms of the graphics design and that is just fine.

Pink Elephants 2 slot has an extra effect or two, a stronger glow here and there, but the essence has been kept. An updated musical theme has been offered for those players who enjoy playing their slots with the sound on, and we can approve, Thunderkick have nailed it with the selection.

How to Play Pink Elephants 2 Slot

Setting up for the gameplay requires following the same steps as in most of the Thunderkick slots. Or if you have played the first version of the game there shouldn't be any holdbacks.

The bets can be selected from the menu which opens up when you press the poker chip button in the bottom right corner. To the right of it is the autoplay button and yet another look to the right is the button for Spin.

Spin causes the game to deduct the selected bet once from the balance, per each turn. In terms of the bets, the game offers a good range, enabling both a low stakes action and a thrilling ride for high-stakes players.

The smallest amount that anyone can bet on Pink Elephants 2 slot is 10p, while the maximum is £100.00 per spin. Whatever amount you select, the autoplay mode will accept it and let the game to play out the selected number of automatic spins.

Optional controls in this regard are to stop autoplay on a specified single win, stop on a balance decrease amount and stop when the feature has been triggered. These controls let the players enjoy the Pink Elephants 2 slot while knowing that their balance spend will be preserved as intended.

How to Win Pink Elephants 2 Slot

The game can pay across any of the 4096 ways to win and only three symbols are needed for a win. The high-paying symbol category are goats this time around while the low-paying category consists, again, of the high and rolay cards which start with nine and end with the ace.

Because the ways to win are many, the paytable reflects smaller amounts for any symbol win combination. Wins with three symbols don't return the bet, except when consisting of the elephant symbol.

Pink Elephants 2 slot has that symbol pay 10x on the winning bet for six of the same, which is possible to occur as we remember it making lots of cluster in the previous edition of the game.

The W symbol stands for Wild and substitutes any, except the scatter/bonus symbol.

The bonus is triggered by the scatter symbol which is a golden peanut. Only three can trigger seven spins, while six of these symbols trigger the ultimate 19 spins. These can retrigger by seeing another set of scatters, but this time around, in the bonus feature, you only need two in return for three free spins.

Another way to get the bonus is with the Mystery Scatter, which is a scatter symbol popping up suddenly to throw on between one and five scatter symbols, and thereby trigger the bonus.

Again, like in the original game, there is a meter that tracks the number of elephants appearing on the reel-set. Each meter corresponds to one of the goat symbols. When one gets filled, the matching goat symbol will be upgraded to the one that is next in terms of value.

Those who play Pink Elephants 2 and have played the first edition of the game would agree that there aren't too many differences in terms of the graphic design and animation. Both game are equally thrilling to play.

The differences lie in terms of the game specifics, such as variance and payout potential. The original game has medium variance and Pink Elephants 2 has high, which means the payout potential is greater, although the smaller payouts tend to be less frequent compared to the other game.

There is the slightest difference in the RTP of both games: 96.10% versus 96.13%, however, the difference that is notable is in the payout potential where the original game could max a 8200x your bet while the sequel has a maximum payout of 10,000x your bet.

The slots experts at Thunderkick have released so many of their productions as free play demo slots, and we don’t doubt this new game will become available also. Many of the online casinos on this provide demo slots, which the players can play for free, so feel free to explore and claim the respective welcome bonus.

The 10,000x payout is huge to say the least and we know that the first game was reputed of delivering big wins. We can’t vouch for the same with Pink Elephants 2 slot, but the features are there for it to happen, and the variance is high.

Discover the Pink Elephants 2 slot by claiming a welcome offer right from this page and play at top-rated online casinos.

Where can I play the Pink Elephants 2 slot?

You can play Pink Elephants 2 slot at some of the recommended online casinos here at SlotsWise. Feel free to check the featured casinos, select the one that suits you the most, claim your welcome offer and start playing.

What is the Pink Elephants 2 slot's max payout?

The most you can win from a spin in the Pink Elephants 2 slot is 10,000x your stake. This is 1,800x stake higher than the original Pink Elephants slot.

Does the Pink Elepanths 2 slot have free spins?

Yes, Pink Elepanths 2 slot has free spins during the gameplay which can be triggered with the scatter symbol. The bonus is triggered by the scatter symbol which is a golden peanut. Only three can trigger seven spins, while six of these symbols trigger the ultimate 19 spins.