The game comes with three rows, five reels and 10 paylines. Wins are made with at least three symbols of the same kind and can occur on multiple paylines. The theoretical return to player (RTP) value for Book of Cats is 94.00% and the variance is between medium and high. Players can win up to 10,000x multiplied by the winning bet. 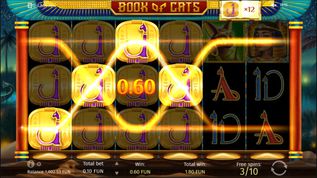 BGaming, which is part of the SoftSwiss group of casino gaming developers, is releasing the ancient Egypt-themed slot that puts the favorite Egyptian pet, the cat, at the center of the game. This is one of those "Book of" games that seem to be following a prevailing format and features. All this sounds good, because Book of Cats slot has a significant payout potential.

Slots players can play the game with as little as 0.10p per spin, which amounts to one penny per payline. In terms of features, players can discover multiple elements to the Book of Cats slot, such as a wild symbol, a free spins bonus, expanding symbols, a gamble feature and overall, an engaging reel adventure.

In terms of graphic design, BGaming have created engaging game that has everything that constitutes a quality slots experience, where the graphics and sound play an important role. The picture symbols are alive and always part of a dynamic change which unfolds on the reel-set.

Book of Cats slots has always something going on the reels. The sixth reel isn't always fully expanded but on the remaining five reels players can witness the cat symbol with glowing eyes, which becomes expanding wild, the scatter symbol, which is a golden book, and so on. Winning outcomes are marked by light that shoots across the winning payline.

All of this amounts to an online slot that is both fun to play and can reward potentially big prizes.

How to Play Book of Cats Slot

To start meeting the mysterious cats, players need to select a bet from the range of available amounts. This can be done by pressing the up and down arrows on the window that says Total Bet.

The selected amount becomes your bet per spin, until you've decided to change it. The range of bets is between 10p and 10.00 pounds, which means the maximum wager is one pound per payline.

Once you've selected the bet, you can play Book of Cats slot by pressing the spin button, which is the double arrow symbol in the bottom-right corner of the screen.

How to Win Book of Cats Slots

Winning payouts in the game are made with at least three symbols, for most symbols. However, some can create winning outcomes with only two of a kind: Cleopatra, the cat, the cat mask and the cat ankh symbol.

In terms of payout values, most optimal payouts are made with six of a kind. In that respect, the most valuable symbol of the game is that of Cleopatra. Her symbol pays 7500x multiplied by the payline bet for six of a kind.

Six cats in Book of Cats slot pay 2500x and six cat masks pay 1000x. The remaining payouts can be viewed on the paytable. The scatter symbol is the game's wild all at the same time, and it is responsible for triggering the bonus feature.

Players can win ten free spins, like in most "Book of" slots, when three or more scatter symbols stop anywhere on the reel-set. When the bonus is triggered, the game assigns one random symbol that will be more frequent in the free spins bonus, and which will stack on full a full reel, and in multiple locations too.

The game is available as a free play demo slot, which means that players can enjoy its features and try it out for its full gameplay with free credits. Payouts do not count in demo play, but the thrill of playing with real money can be had with only 10p per spin.

With a maximum payout potential of 10,000x and a free spins bonus that is according to most “Book of” slots, the player stands a chance to win respins and bigger wins with the help of the special symbol, especially it is one in the high-paying category.

Discover Book of Cats slots by claiming a welcome offer right from this page and play at top-rated online casinos.

Return of the Dead