Spin the reels of Monopoly Megaways slot from Big Time Gaming. Themed on the classic board game, it comes with two innovative game mechanics - MegaWays and Reel Adventure. It is a highly volatile online slot that can get you 3,500x your stake on each base game spin. The highest payout can reach an amazing 14,700x your stake on every free spin! 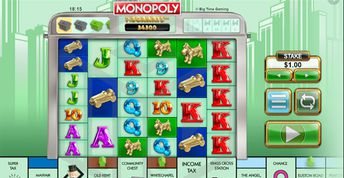 Monopoly Megaways slot is a high variance game coming from the studios of Big Time Gaming. It is a 117,649-ways-to-win slot playable from 10p to £20 per spin on all devices. Themed on one of the most popular board games ever, you can spin the reels from 10p up to £20 on all devices. The game uses the Reel Adventure engine coupled with Big Time Gaming’s MegaWays technology. Monopoly MegaWays also uses the Reaction feature which continuous wins in play. With this feature, Mr Monopoly moves around the board to give players extra prizes including maximum MegaWays spins and increasing multiplier during the Free Spins feature.

As one would expect from the name, Monopoly Megaways slot is themed on the iconic board game.  The reels are placed within a metallic frame with the game logo at the top of the screen. The game buttons are positioned to the right of the reels while the bottom of the screen is reserved for the properties.

The symbols in the game can easily be split into two groups. The standard playing card symbols 9, 10, J, Q, K and A are the low values, while the Monopoly tokens – dog, race car, battleship and top hat – are the game’s golden high values.

The special symbols in the game include a golden letter M encrusted in diamonds as the Wild symbol which replaces all other symbols.

How to Play Monopoly Megaways Slot

Since Monopoly MegaWays slot is using up to 117,649 active ways to win, the only variable you need to set before pressing the spin button is your stake for the spin. You can set your stake by pressing the left and right arrows of the STAKE box. You can bet as little as 10p and as much as £20, according to your bankroll. Once you do that, just press the dark green button with two inverted arrows beneath the STAKE box.

Since it is yet to be released, we don’t know whether Monopoly MegaWays will have a free play version. However, it has become an unwritten rule for all new releases to offer such demo version, so there is a good chance that you’ll be able to try the gameplay before registering an account with a casino. The free play versions are almost identical to the real-money versions of the games, except you can’t withdraw your wins. This is so because you’re playing with virtual funds.

How To Win Monopoly Megaways

If you haven’t played a MegaWays slot before, all you need to know is that they offer a lot of ways to win. Each reel can have between two and seven symbols, the more symbols per reel, the better. If you get seven symbols on each of the six reels, you will play with the full 117, 649 MegaWays active.

Monopoly MegaWays slot operates on the cascading symbol mechanics and reaction wins. When you land a winning combo, the symbols from the combo disappear and get replaced by symbols from above. If you get a cascade with another winning combination, which is known as a reaction win, the procedure continues.

This feature is where the different modifiers and features come into play to give you a better chance for a win. Whenever you get a winning combo, Mr Monopoly starts moving on the board. If he lands on a station or a utility company, it will become yours. If you land on a property on your second reaction, you will get a house on it with any additional reaction adding an extra house to it. The special squares will get you special rewards:

During the Free Spins round, even more win multipliers and free spins are available:

The RTP of Monopoly Megaways slot is 96.50% which makes the game an above-average online slot.

Overall, Monopoly Megaways is a great-looking slot themed on the classic board game. It is all about the free spins, but you can also benefit from other bonus features like re-spins and infinite win multiplier.