Get your sunscreen ready as we are taking a trip to the African savannah for an adventurous safari with Elephant King slot! This IGT game uses a traditional five reels and 40 fixed paylines setup, but its features are anything but traditional. Playable from 75p a spin, the game offers a Free Spins Bonus round and IGT's innovative Prize Disk feature. 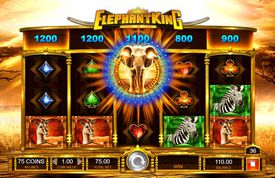 You better get your sunscreen ready as we are taking a trip to the African Safari. The Lion has another thing coming with this Elephant King slot, and we are here to facilitate the big guy’s job in taking the crown, and in return, he will put some lucrative prizes in our pockets.

Elephant King is a relatively new slot by International Gaming Technology, or better known as IGT, which focuses on the Elephants and is here to award us with the five reels and 40 paylines that it has. The game has an RTP of 96.02% which is more than acceptable and more than the average of the online slot games. Want to find out more about Elephant King slot? Stick around.

International Gaming Technology had a fantastic idea about this slot game, and it seems to work out. Elephant King slot has quickly grown among the top slots and it is not a surprise – it has outstanding graphics, some marvellous bonus features and as you’ve seen the RTP level is more than acceptable.

It is expected from a game developed in 2017 to have outstanding graphics as all the modern games tend to compete with the design nowadays. Elephant King uses standard reels on top of an amazing background. On first glance, you will see that the whole game has gold on the reels, the background and the buttons that are on the reels. It is here to represent the hot temperature in this particular area of the continent, and the designers from IGT did it fantastically.

The background is barely visible from the sun shining on it, but we can see a vast field, some of the favourite of the gentle giant creatures, with trees and a really peaceful horizon. The top, just above the reels, is a place reserved for the game’s logo, and that’s where the sun shines from, while below the reels, you can see the options that this game offers. The AutoPlay and Max Bet feature, the magical lit Spin button and the manually adjustable options such as coin value, denomination and number of paylines active.

The overall design is on a satisfying level, and everything is well within the reach of the mouse, user-friendly, as expected from a relatively new game. The music adds a whole new level to the game, teleporting you to the wilderness and making sure you feel the whole atmosphere.

How To Play Elephant King

With five reels and 40 paylines, Elephant King Slot has enough elements to make you happy! You can spin the reels from as little as £0.75 all the way to astonishing £1,500.00. This will make the people that are adrenaline junkies happy, as Elephant King has one of the highest denominations range from all the online slots. By hitting the “Max Bet” feature, the game will trigger all the paylines and set the denomination and the coin value to the highest numbers. Be careful with this feature, because although it may bring a nice amount of cash on your stake in really quick time, it may also lose all of your money pretty fast if you are not careful.

On the other hand, if you are interested in a more relaxed approach, check out “Auto Play”. This will set the reels spinning automatically with you previously choosing the denomination and the number of spins. You can sit back and relax in the reels and the music while the game spins for itself, filling your stake with lucrative numbers. If you want to go manual again, you can cancel the feature and adjust the options below the reels.

How To Win Elephant King

The symbols on the reels include diamonds, spades, clubs and hearts as well as various animals such as gazelles, zebras, rhinos and, of course, elephants.

The card suits are the lower valued symbols, while the highest valued one is the elephant, as expected. It is strange that the game decided not to follow the path of all the other slot games that are including the deck of playing cards numbers as lower valued symbols, but it’s good to see a little change in the slots once in a while.

To make things more interesting, there are special symbols. The wild symbol of the game is a native shield and spear, which participates in the winning combinations of the normal symbols by acting as a replacement for them. On the other hand, the Elephant King is the scatter, and it is here to trigger the bonus feature of the game. 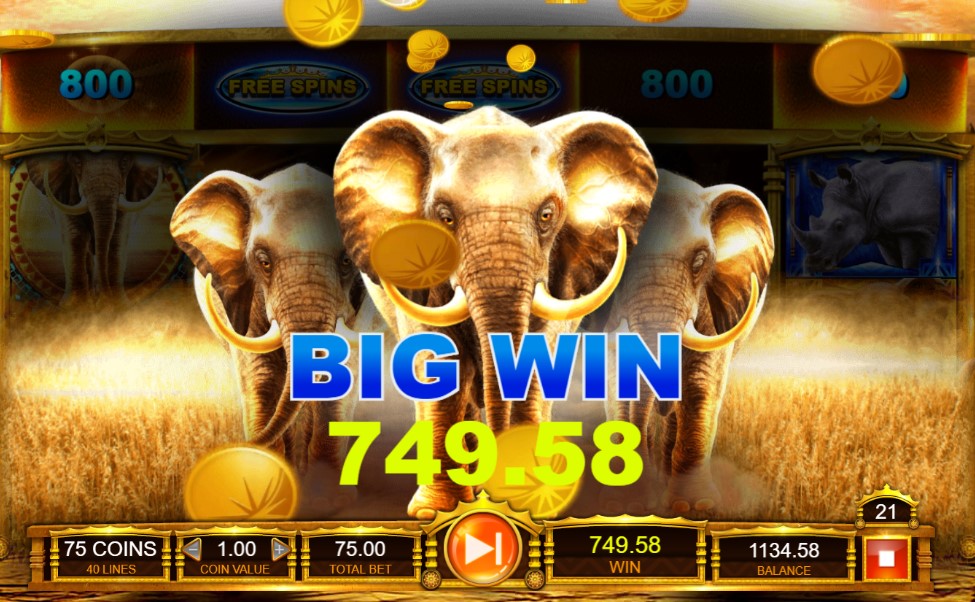 Elephant King is one of the two IGT releases that offer the innovative Prize Disk feature. The second IGT slot that features the Prize Disk on its reels is Wolf Ridge.

With each spin of the reels, the awards from the Prize Disk shift one reel to the left. This introduces a different award in the Prize Disk position above reel number five.

If you don't already know what RTP stands for, it is an abbreviation of Return to Player. It is an expected payback which reflects the theoretical return of a game for a very large number of plays over an extended period of time.

As with most online slots, Elephant King slot also has its own RTP rate. Elephant King has an RTP of 96.02% which lists the game among slots with average RTP rates. However, it is also worth noting that this is the highest RTP rate that you could get when playing this slot. For Elephant King, the RTP ranges between 92.16% and 96.02%. If you want to find out more on RTP, read our RTP guide.

Elephant King slot is an amazing slot game with a brilliant idea. The gentle giants are presented as the kings of the African savannah and by helping them in their mission, you are helping yourself with some lucrative prizes.

The two bonus features, the RTP of 96.02% and the overall design of the game most certainly put it into games that you have to play. There are happy customers from all around the world constantly on the reels of the Elephant King slot.

Check the game out at some of our casinos to claim the welcome bonuses that they offer in form of Free Spins or in-game cash facilitators, and you won’t regret your decision!