Willy's Hot Chillies comes with a standard reel-set of three rows and five reels. These spin across 20 paylines that can trigger wins with at least three matching symbols. The variance on this game is low to medium, which is quite a refreshing change if we consider the huge number of high variance slots. Nevertheless, the payout potential is exceptionally decent, at 2000x multiplied by the bet. 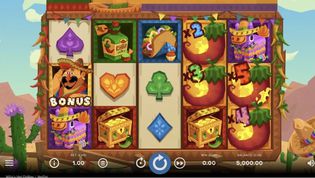 NetEnt are always quick to come up with ingenious solutions for themes that have been in the works for years. Willy's Hot Chillies slot is a solid example of how that works. We have a Mexican/chilli theme which has few dozen good slots representing it in the world of online casinos. The result is an engaging game that can offer lots of festivities in the form of big wins and fun-loving spins.

The game comes with a theoretical return to player of 96.00% - right on the average and all other specs seem to suggest that the game may become a favourite. In terms of extra features, Willy's Hot Chillies can bring about stacked multipliers supercharged wilds, a free spins bonus and more.

In terms of graphic design, the slots experts at NetEnt have decided to make a bold run for the unusual. So we have a Mexican setting where Willy is the chilli master. His reel-set appears to be pixelated, which is just a matter of style for NetEnt. Why have the screen nicely ironed-out when you can have it unusually spicy, just like the chillies?

Willy's Hot Chillies slots has lots of extra visual features, so much so that each spin is as lively and excited as a burro having mistaken a hot jalapeno pepper for a treat. The game being fired-up by chillies results in lots of blazes on the screen, a smiling Willy, a fire-breathing Willy and other visual niceties.

The main highlight that is part of the look and feel of Willy's Hot Chillies is its soundtrack. Sounds like a mariachi band in hypermode, with lots of cheering and fiesta noises - just what the game needs.

The layout of the settings is going to be quite familiar to slots players who have played one or two NetEnt games. All of the buttons can be found in the bottom of the reel-set. The button to spin the reels is located below the thid reel and there are two more important controls on both sides of it.

To the left is the button for autoplay. Press it to open the menu where you can select the number automatic spins from the available presets. Additional settings include placing stops on how much you are willing to spend while the game is in autoplay.

To the right of the spin button is the one that shows the international fast-forward symbol. Having it toggled on causes the reels to spin and stop faster than the usual. Another look to the right and we have displays for the win amount and for the balance.

In the opposite corner, Willy's Hot Chillies slot has the bet setting. Press the coin stacks to open up the list of bets. The game has the lowest bet of 20p, while the maximum that anyone can bet against this chilli house is a sultry £400.00 per spin.

Winning outcomes are made with at least three of a kind symbols that must start on the leftmost reel. The game can produce multiple payline wins that have resulted from the same bet amount and spin.

Willy's Hot Chillies slot has a wild symbol that substitutes for all others, except the scatter. The red hot chilli is the symbol that can form wild stacks, which is part of the game's extra features.

High-paying symbols include a bottle of hot sauce, a taco, a pinata and a chest of gold. The latter is the most valuable symbol, but pays only 3x multiplied by the bet, which is to say Willy's Hot Chillies doesn't have a very high payout potential based on regular payline wins.

This is where the extra features come in to help out with the odds and outcomes.

As was noted above, wins are slim pickings without the multiplier wilds, which can add-up for a bigger effect. These can factor-in 2x, 3x, 4x and 5x into the winning outcomes.

Another detail of the bonus feature falls on Willy, who is the game's bonus symbol. When the wild multiplier stacks are met by that symbol on the first reel, the game offers Willy's Hot Wheel bonus.

In the event, the game can trigger free spins based on the multiplier total that was on the spin that triggered the bonus. Each full multiplier stack gets a Fire Pointer.

The wheel is, in fact, a strip that shifts its plates to the left. Players can win additional boosters to the bonus: +3 spins, Chillie Multiplier, Coin Wins and an Extra fire pointer on any remaining reels.

The overall effect can amount to big wins and events that are unleashed in succession, which is quite pleasing to witness.

The game is available as a free play demo slot which enables players to try its features with free credits, which, understandably, don’t count for real money wins.

Visually, the game can bring about super amounts of fun, but its low to medium variance means payouts will tend to be on the low end. The bonus feature can save the day because this is where the players can come to witness the rare big win potential.

Discover the Willy's Hot Chillies slots by claiming a welcome offer right from this page and play at top-rated online casinos.