The game is called 24k Dragon slot and comes with five reels and eight rows, which closely resembles one of the company's recent release Celebration of Wealth slot.  However, that game gets nowhere near it because the dragon game has an expanding reel set that starts it off with 1024 ways to win and can rise up to 8192 ways.  The theoretical return to player (RTP) of 24K Dragon is 96.18% and the volatility is high, but not at the highest level and the maximum payout potential is 24,000x. 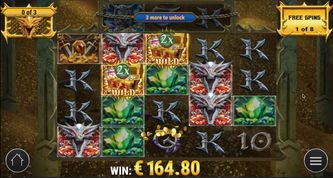 Play'n GO has a long list of games that are slated for release in the coming months and until the end of 2020, but the game at hand is one of the most anticipated one. Players are going to find a thrilling adventure surrounding a fierce dragon who can breathe fire and wreak a positive chaos on the reel set that benefits the player.

The name of the game, 24k Dragon slot suggests two things, that the dragon is golden and by that we mean it can bring about exciting things on the playing field, and the other thing is the maximum payout potential of the game of 24,000x which is exceedingly solid. Another important detail is that the 24k Dragon RTP is above the average, at 96.18%, so we can expect a big win potential during the free spins bonus.

The reel set starts as a four-row, five-reel affair whose graphic design reminds us, somehow, more of a Microgaming thing than Play'n GO. The premise is the stuff that makes every epic adventure exciting, be it a book or a film. Tolkien fans will feel right at home considering the enormous heap of gold coinage and diamonds in the background and the lively dragon simply justifies the title of 24K Dragon slots.

Winning outcomes are marked in an exciting animated detail surrounding the symbols, especially those in the high-paying category. Another very exciting element regarding the design is the sound. Those who play 24K Dragon will be pleasantly surprised by the cinematic masterpiece that is the soundtrack.

How to Play 24K Dragon Slot

Players start at the more-standard reel set of four rows and five reels and to get to the game's full might and magic players need to get the spins rolling in order to trigger the bonus feature. To start playing 24K Dragon you can press the Play button for each spin or you can opt for the hands-free option by letting the game engage in its autoplay mode.

The latter option is possible by selecting the smaller of the two circles in the bottom-right corner of the screen. The menu avails options from where players can select the number of automatic spins and add additional conditions.

Players can view all of the symbol payouts on the 24K Dragon slot by selecting the 'i' button in the bottom-left corner of the screen. To select a money amount that you can wager against the game simply select the minus and plus buttons from the bottom of the screen and choose a value between 20p and £100.00 per spin.

How to Win 24K Dragon Slots

Winning in the game requires three or more matching symbols to occur on adjacent reels, starting from the left and extending on to the rightmost reel.

There is a wild symbol that can substitute for any of the standard paying symbols. The wild is represented by a golden chest filled with gems and gold. This is a fitting way to draw the symbol because 24K Dragon slot can post random multiplier wilds with values of 2x or 4x.

The most valuable symbol on the paytable is the gold dragon which is worth 5x your bet in exchange for five matching symbols across the playing field. Considering the remaining payout schedule, the values are notably low, so players can’t expect to gain big wins from the symbol payouts on their own.

For this reason 24K Dragon has the wild multipliers, respins and the amazing free spins bonus.

Those small-ish payouts can get a nice boost with the help of the respin feature which can trigger every time when a golden dragon lands on the reels.

Each respin results in an added row and each row is made of three reels. Of course, the number of respins and rows can go up in number and thereby win value, for every additional dragon that flies down on the reels.

The feature that you really want to see more of is the free spins bonus. You need three, four or five scatter symbols, represented by the wonderful diamond, in exchange for eight, 15 and 20 free spins.

The dragon symbols can be seen during the bonus, but their appearance is annotated in the dragon collection meter and the reel set expands once you've collected three, seven, 11 and 15 dragons which avail the first, second, third and fourth extra row, respectively and that in turn increases the number of ways to win towards the 8,192 maximum.

Players can enjoy the game at online casinos by claiming one of the featured packets right from this page. Some casinos enable you to try the game as a free play demo with free credits, just to get a taste of the full features and gameplay details.

Play’n GO has made a high-pay potential game that comes with an exciting bonus feature. This is where the high variance and big win potential is located, but the base game isn’t half bad either, but you’d need to land those golden dragons in order to invite the respins in enhance for better odds at making bigger wins.

Discover the 24K Dragon slots by claiming a welcome offer right from this page and play at top-rated online casinos.