Play'n GO have worked enough details in this spy-themed slot to sreate an engaging adventure on five reels and 20 paylines. Locking reels, colossal symbols and a free spins bonus are the triage of features that can bump up the big win potentials.The maximum payout in Agent Destiny is up to 5000x. 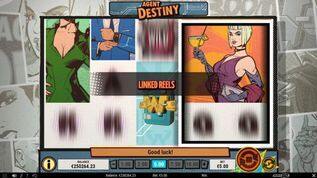 There is a powerful force of attraction that draws from behind the style of comic book art from the 1960s. The slots experts at Play'n GO have styled the characters in their Agent Destiny slot in the manner of a noir story about a crime-stopper and a number of rogue geniuses.

The end result is a well online slot with three rows, five reels which spin across 20 fixed paylines. On the paytable are a cast of characters and high cards which provide the big and small wins. There is a wild symbol that substitutes for the rest, and there are some extra features.

Besides a dynamic base game, Agent Destiny will make its presence known thanks to the colossal symbols, which can take up various chunks of the reel-set. A free spins bonus is there to up the chances for multiple wins emerging from the same stake, and there is a feature called Linked Reels, which is a reel modifier.

Play'n GO aren't the only to have tapped this theme. NetEnt had released their Jack Hammer  installments and Microgaming have their spy-themed slot in the Agent Jane Blonde series. This game combines both and offers a specific graphic design, which suffices for a fun reel adventure.

Agent Destiny slots comes with some tricks up its sleeves, and this isn't true only about the game's features. There are video effects and eye candy that make the game liquid and dynamic. Payouts are marked in dynamite explosions and the music for the theme is just right.

How to Play Agent Destiny Slot

It is amazing how Play'n GO can keep consistent with the controls layout and change the theme whichever way the want. Here the game's buttons have been recast in a comic book style, but all are still to be found in their familiar positions.

Yor can hobnob with the famed agent and the criminal masterminds with the push of the Spin button in the bottom right corner. To the right is the smaller round button which is for the autoplay mode. In the opposite corner is the 'i' button which leads to the paytable and a number of settings buttons in the very bottom of the screen.

Agent Destiny slot offers a range of bets that begins with ten pennies and ends with £100.00 per spin. Any of the available amounts can be selected from the sliding bar below the reels. The active bet is shown in the white space on the right and the balance is in the left corner.

Anyone can program the game to spin the reels on its own by pressing the smaller of the two round buttons. A menu opens up with the automatic spins presets, which also provides additional options that let the players place greater control on the balance spend for the autoplay rounds.

How to Win Agent Destiny Slots

Winning at the game is made possible by landing three or more symbols of the same kind on any of the 20 paylines. No matter the size of the bet, the game will always spin across all.

In terms of the payouts, the high-paying symbols are the picture symbols. Of these, Agent Destiny is the most valuable with 15x multiplied by the winning bet.

The most lucrative symbol in Agent Destiny slot is the wild. This symbol is represented by what appears to be an impregnable safe, which pays 60 multiplied by the winning bet when five of the same line the payline.

Thankfully, the game offers more than just the regular symbol wins, well, in a way, as wins can also be made with the help of the colossal symbols. These are the same symbols on the paytable appearing to take up more grid spaces than just one, which occurs at random.

The bonus is triggered with three, four or five scatter symbols. These scatters are also wild, represented by a bizarre pulsating machine. This symbol stopping on the reels adds one addition spin.

The free spins bonus is also receptive to the colossal symbols, as is to the Linked Reels feature.

This feature appears at random to link any two reels on the layout. When this happens, the locked reels will turn up the same set of features. If there is a wild in the picture, it is as if there is a guaranteed win .

Play'n GO release some of their games as free play demos, while some are held exclusively for registered players at the online casinos that host their games. We can't be sure whether this game will become available as a demo, so time will tell.

Thanks to a set of features that can coalesce towards the possibility of bigger wins and a 5000x top payout potential, the game will draw some attention and rightfully so. We give it a thumbs up for the ingenious design and for the high variance.

Discover Agent Destiny slots by claiming a welcome offer right from this page and play at top rated online casinos.