Go in the wayback machine but stay in the 21 century on Big Win 777 by Play'n GO. This retro-themed slot has a wheel of fortune bonus game and a possibility of a free spins bonus. The maximum payout from a single spin can get up to 5000x and the bonus wheel can reach 777x on the triggering bet. 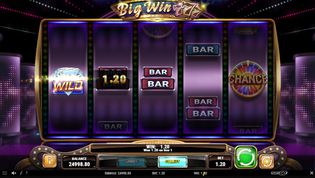 Players can win up to 5000x on the bet from a single spin through the amazing bonus on Big Win 777 slots.

Here come Play'n GO with a classical slot machine in an ultra modern guise. Big Win 777 slot looks like one of the best in its category, but do the potential wins justify the sleek design we shall see in our review.

The game offers three rows and five reels, which like nearly all classical slots machines on the casino floor, do not necessarily turn up three full symbols on the reel.

Besides this feature being common with other games in the category, Big Win 777 offers the lot of classical symbols cuh as sevens, combinations of BAR and a diamond.

On the other hand, the players will find a paytable which includes a wild as well as a scatter-bonus symbol, so we have a full reel adventure in this game.

Payouts are made with three symbols of the same kind starting from the leftmost reel and on to the right. The reel-set of three rows and five reels spin across 15 always active ways to pay and the top payout can reach up to £450,000.

Play'n GO usually go full steam ahead on their productions and case in point is Big Win 777 slot. They could have made an all-right game with a rigid retro look and feel, but they've treated nostalgics to a splendor of lights and and colors, where purple dominates and does well to bring out the best of game.

The reel set seems to have landed in a space craft on account of the environment that surrounds the reels. Purple columns dotted by white LED lights create a funky spatial mood and the regal outfit on the slot machine mimics the Vegas days of old. Throughout it all is a musical theme that does well to entertain.

This amazing adventure on the reel-set starts with the push of the green spin button, which is located in the bottom right corner of the screen. To the right of it is autoplay which does well to help the players kick back and relax while the game plays on its own.

Press autoplay to load the settings. Five number presets for the automatic spins contain values of 10, 20, 50, 75 and 100. There are additional options to make autoplay stop on any win, on the bonus game, and on a set of values that the players can specify regarding single win amount, balance decrease and balance increase.

We are used to Play'n GO's new layout where all of the settings are below the reel set. This is where the players can find the bet amounts, on the sliding scale. The smallest bet is a penny per payline to the effect of £0.15 per spin. The biggest bet of £90.00 reflects a mighty payline bet of £6.00.

Anyone who wants to check out the symbol pays, bonus feature information and other details about the gameplay and the rules on Big Win 777 can do so by accessing the paytable in the bottom left corner, through the 'i' button.

A rare feature on the slots are payouts consisting of only two symbols. This is one of the slots that does that with the wild and the golden and red sevens symbols.

The most lucrative symbol in Big Win 777 slot is the diamond, which is the wild. When five of the same fall on a payline the prize won with a bet of £1.20 is 80x on the line bet.

Prizes of 20x and 16x on the line bet are paid for five of the golden sevens and five of the red sevens, respectively.

The rest of the symbols are the triple, double and single BAR symbols, which pay 8x, 6.40x and 4x on the line bet. The paytable is dynamic and displays all of the symbol wins according to the bet.

The wild is the most valuable symbol in the game. Not only does it substitute for any of the symbols but it is also provides strong payouts, especially if it comes to fill the entire reel-set.

In the free spins bonus the wilds are sticky and they spread on the reel. That way, the game can produce a top payout of up to 5000x from a single spin, multiplied by the bet.

The Chance symbol falls on reels one, three and five to active the Chance Wheel. Here every spin wins and prizes range between 5x to 777x on the winning bet. There is also a 1 in 3 probability to trigger the free spins bonus, which can retrigger indefinitely.

Play’n GO have released the game as a free play demo, which means anyone can play the game to test it and decide whether to play with real money.

It’s been established and widely accepted among online slots players that Play’n GO are among the topmost providers of online slots. This game attests to that. Even though it is a retro slot, the design is exquisite, and the potential payouts huge. What is more, the bets allow for some pretty impressive sums to be wagered per the winning payine.

If you’ve been impressed, claim a welcome offer from this page and discover Big Win 777 slots at top rated online casinos.
.