The game comes with five reels and three rows that spin across 10 paylines. Expectedly for a game of this format, wins are made with three matching symbols starting on the left reel. Blinged has a theoretical return to player of 94.27% and medium variance, while the maximum payout potential is 5000x multiplied by the winning bet. 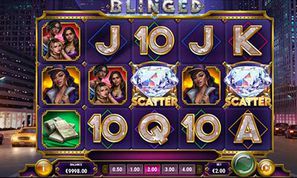 The word 'bling' is derivative of the expression 'bling blig' which having been around for a short period of time, filling the verses of many new rap songs, became officially accepted as a word in the English language. Perhaps using 'bling bling' in a spoken sentence can immediately plummet you low on the scale of uncool, but the expression 'blinged out' and so on, is legitimate as is this 'bling' inspired slot by Play'n GO.

By all looks, Blinged slot celebrates street and hip hop culture. The symbols tell a story about dancing crews, flamboyant street attires, 'rocks' which is to say precious stones, and wads of cash because without making cheddar you don't get no cred. The game has several extra features in addition to a cool base game: free spins, multipliers and wilds - enough for a reel adventure to unfold.

In terms of graphic design, the game has filled its potential to the maximum. The background is a wide boulevard lined with skyscrapers and cars. It looks a lot like a street in New York City. The symbols are things that you wear if you want to show you have game. The money, the golden ring, the diamond-studded belt buckles for cards, and so on. Part of the high-paying symbol arrangement are the peeps, one of whom represents the game's wild symbol.

Blinged slots has enough lighting and moving parts to make for an engaging reel adventure. Symbol payouts are celebrated in the appropriate manner for the occasion and the high-paying symbols jump to life to celebrate it with you. The musical theme, however, is a lot more representative of the Rhythm and Blues side of things than hip hop, but who is counting. The track is super suave and lets you enjoy the game even more.

How to Play Blinged Slot

You can start schmobbing on the street with the crew by pressing the spin button, which is a glowing orange orb located in the bottom right corner of the screen. Next to it is the smaller orb button, which is for the autoplay setting.

But before you make any moves, it is best to check out the amount of the total bet. This is shown underneath the reels, where the cost of the bet is highlighted on a pink background. To change the bet, use the minus and plus buttons to set the bet. The smallest amount that you can bet is 10p and the highest £100.00 per spin.

Players can view the most current balance in the window below the first reel. To the left there is another circular button that opens up the Blinged slot paytable. To change the speed of the reels press the thunder button below and to toggle on or off the sound press the speaker button.

One way to play Blinged is by selecting a number of automatic spins from the autoplay menu. Play'n GO enable the player to set additional options so as to have greater control over the balance spend and to receive a prompt when the free spins bonus has been triggered.

How to Win Blinged Slots

Winning at the game is possible on 10 always-active paylines and wins are made with three or more matching symbols. A wild symbol is there, and dressed in an apparent way, to substitute for any of the standard symbols, except the scatter.

The royal cards and the ten are low-paying symbols that pay amounts that don't quite return the wager, with wins of three of a kind and even few four of a kind outcomes. The variance of Blinged is medium, which means payouts can range in size from small to medium to big.

The game comes with a scatter symbol, represented by a huge diamond. These can land on reels one, three and five to trigger five free spins. This is an interesting approach to the bonus feature because players can get a guaranteed win or if that doesn't shake out, the respins go on until a win has been rung up.

An added bonus is that the respins start at 1x multiplier and add one plus for each respin. So it is possible to get somewhere with this scheme, as the scatter symbol adds one extra win spin.

The game is available as a free play demo which enables players to get a taste of genuine breakdancing street culture and get a sense of the payouts while playing with free credits.

For a ten-payline game that wasn’t long announced by Play’n GO, it’s quite solid. The extra feature gives you a chance to score wins with multipliers and the maximum payout of 5000x can lead to a blinged-out prize.

Discover the Blinged slots by claiming a welcome offer right from this page and play at top-shelf online casinos.