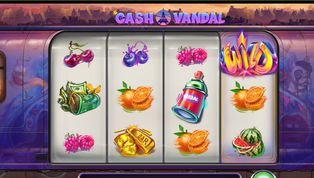 Paint some graffiti for the potential gain of cash prizes in the Cash Vandal slots. The game has a 5000x top payout plus several boosters and bonus features.

A delightful look into the famed graffiti culture of the Paris subway system through five reels and three rows is made available by the Cash Vandal slot. The theme of this Play N Go slot game is bombing graffiti on the subway cars for a chance to win the top paying 5000x prize, as well as smaller but still hefty prizes. The design around the game is exquisite and there aren't any of those high cards symbols, which makes a lot of room for these cool, street-cred symbols that deliver the various pays.

Play N Go never shy away from delivering splendid slot games that have received extra attention to detail. In the Cash Vandal slot we have the same approach, with each of the symbols being owned by small details that are just plain awesome. The players can travel to different cities where they can work their graffiti art on new subway cars, and there are huge symbols that interact with the wild and enter the reels with bigger chances for scoring a win.

The fruit symbols are almost liquid, with pieces of them being separated, producing drops of juice, and the wad of cash being spun into a rubber band, displaying a street technique that goes with the cool feeling of keeping money in that fashion.

Then there is the reel-set itself which provides a clear view of the subway car, the reels, and the settings underneath. All this sets the stage for some subway surfing towards the potential prizes that can be found in the Cash Vandal slot.

How To Play Cash Vandal Slot

The game has ten paylines and these are all active and at all times. That means, no need to fiddle around with any buttons pertaining to that, so the only thing that needs to be set it the bet per spin. That's the easy part. As long as you have an idea about how much your bet per spin is going to be, it will be easier to select a value from the scroll bar underneath the reel-set.

The smallest bet starts at only £0.10, with the biggest available bet being £100. There is a wide range of wager amounts in-between that the players can select, and in that regard Cash Vandal does well to provide the abundance of options. Other buttons that are relevant for the game are the autospin, which allows the players to set up as many as 100 spins, with the option for loss or gain limit. The paytable button is in the shape of the letter 'i' wrapped inside a circle. This is where the players can discover all of the symbol pays and information about the bonus features and kickers.

How To Win Cash Vandal Slots

Winning the game understands seeing some high-paying combinations land on the reels, or a string of events that trigger new winnings in a subsequent manner. The Cash Vandal slots has a highest payout of 5000x on the line bet and that is not a hlaf-bad amount compared to so many other slots out there.

On top of it all, the players will discover a host of bonus features, such as the Golden Spray Can and changing the city feature. Each city comes with its own kicker. For example, Paris comes with the Synchronized Reels feature, where reels one and two work in concert and display the mega symbols which take up a square of 2x2 on the grid.

The London subway adventure comes with Mystery Symbols where up to nine of these appear at random on either one of the first three reels. Last but not least of the City Features in the Cash Vandal slot is Berlin. In this city the players are going to get a boost of the Random Wilds feature, where two or three such symbols become painted on the first three reels.

The game has that bonus feature and it is triggered with one golden spray can on reel four plus two or three red cans anywhere else, which results in five or ten free spins. The City Feature comes with every free spin and lets the players choose their free spin destination, which comes with boosters for each different city.

This Cash Vandal slot bonus can be retriggered with the golden spray can appearing on reel four, which locks that reel into place and lets the other reels spin. The stacked symbol that appears on each spin is made of any one symbol from the reel-set, and that can be the wild too.

To start your graffiti bombing adventure in Paris, London or Berlin, you can claim a welcome bonus to one of the casinos right from this page.