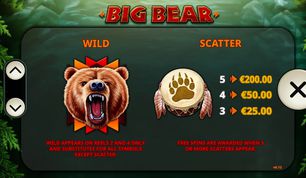 Face the grizzly Wild and let it rumble the reels on the Big Bear slot, for a chance to win many hefty prizes, including a £20,000 payout.

Playtech are a renowned company in the world of online slots, with dozens of releases under their belt. The latest release is called Big Bear slots. It brings five reels on three rows  that spin across 243 paylines. Besides a dynamic and fun-loving gameplay, the game offers an extra perky Wild symbol which offers multipliers that can reach 4x. The Big Bear free spins bonus feature can muster up the wild symbol with a multiplier kicker of up to 16x, which presents an excellent opportunity for maximizing on the triggering wager. But if you stay a bit longer you will discover bigger and badder perks that come with the Big Bear slot.

Meanwhile, the range of bets is enormous, and gives the players to treat the game as either a penny-slot or a high-stakes affair, with the basic bet of just 10p and the top bet of a whopping £500 per spin, which certainly rings in the most lucrative prizes but also carries the biggest risk. At any rate, this game will be enjoyed by the pro players and by novices alike, whereas the free spins games will be the most anticipated feature in it.

How To Play Big Bear Slot

Playtech have put together a clean-cut playing surface with only the Bet per Spin setting from the wagering controls. This setting is located to the left of the reel-set. The range of the bets starts with £0.10 and goes all the way to £500, however, there are plenty of sums that can be selected from in-between.

Other than that, everything else is in plain view - the reels and the rows are centrally placed and the Spin button is to the right, being animated with the circular arrows in play. A new feature we have yet to see at another game is the 'Hold for Autoplay', which lets you do exactly what is stated.

The theme of Big Bear is wild animals, however, instead of having the lion as the king of the jungle, here we have the bear in that capacity. Besides the bear, there is a range of animals, which represent the high paying symbols. In this category we'll see an otter, a trout, a wolf, an eagle and a mountain lion. As for the symbols of lower value, these are the cards numbers and faces starting with nine and ending with the ace.

There are few other symbols, and these are the specialty symbols. The Wild is represented by the grizzly bear and the scatter is a ceremonial drum with Native American implements, which besides rewarding the free spins bonus game, also rewards some hefty amounts of money.

How To Win Big Bear Slot

We all know that luck is always the deciding factor in winning a slot game, but the Big Bear slots comes stacked with bonus features, most of which revolve around the free spins. The bonus features can be of help in improving the odds of landing a string of strong winning combinations, because you get a number of spins which leave your balance intact for the duration.

The Big Bear free spins are awarded when the scatter symbol appears in three instances and that works in any three positions on the reels. Once these symbols trigger the bonus, you are presented with a second screen at which you select one of three features.

Each feature comes with a different number of free spins and these are in opposite correlation with the kickers that are added. The more free spins you choose pushes down the size of the multiplier given with the Wild symbol.

For example, opting for 10 free spins  comes with a x4 multiplier on any wins with the Wild on reel two or four. Additionally, if the wild is part of a winning combination and appears on both the second and fourth reels, the added multiplier on that outcome is a wondrous x16.

This is a free spins game feature which plays with the Wild symbol, the all too famous Big Bear slot wild. This symbol appearing on reels two or four will make the reel stay for another spin, while the reel next to it is given the additional spin. This also comes with multipliers. For example, any winnings with the bear on reels two and four, on the third feature, will result with a 36x multiplier.

Last but not least, the game’s top payout is a whopping 20,000 that come by way of five scatters landing anywhere on the reels. You can start playing with claiming a welcome bonus at one of the casinos on this page.