With five reels and 30 paylines, Playtech's Blue Wizard slot offers plenty of chance for a win! Playable from 10p to £500 per spin, it comes with the Fire Blaze Respin feature where you can win a GRAND, MAJOR, MINOR or MINI jackpot. You can also benefit from a Free Games feature where you can land wild multipliers of up to 16x your bet for the spin. So, claim your welcome offer today and spin for the chance to win big on Blue Wizard! 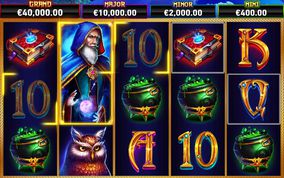 Blue Wizard slot is another Playtech game that comes with the Fire Blaze Jackpots feature. It is a five-reel and 30 paylines slot playable from 10p up to £500 per spin. Themed on the ever-popular magic theme, Blue Wizard offers the Fire Blaze Respin feature. During this feature, you can win cash prizes and one of the four fixed jackpots. Moreover, there’s a Free Games bonus feature with wild multipliers of up to 16x your line bet.

When you launch the Blue Wizard slot, you can immediately notice that it is themed on magic and wizards. The five-reel and three-row reel set is placed against a background representing the wizard's house at dawn. The four available jackpots are visible atop the reels, while the game buttons are placed at the bottom of the screen.

The reels of Blue Wizard are decked with both low value and high-value symbols. The first group includes the five standard playing card symbols 10, J, Q, K and A designed with a magic twist. They all award the same payouts for combinations of three, four and five matching symbols on an active payline.

The group of high-value symbols consists of four on-theme picture symbols. The golden ring, the spellbook, the cauldron and the owl all award payouts for combinations of identical symbols. They are listed in ascending order.

Blue Wizard slot also features three special symbols for the Wild, Scatter and Bonus symbol. The Blue Wizard himself is the game Wild which substitutes for all symbols, except the Scatter and Bonus. It can appear only on reels two, three, four and five. The castle is the Scatter in Blue Wizard and the key to the Free Games Feature. The Crystal Ball symbol acts as a Bonus symbol that appears on all reels. The values that appear on the Crystal Ball are multiplied by your total bet. 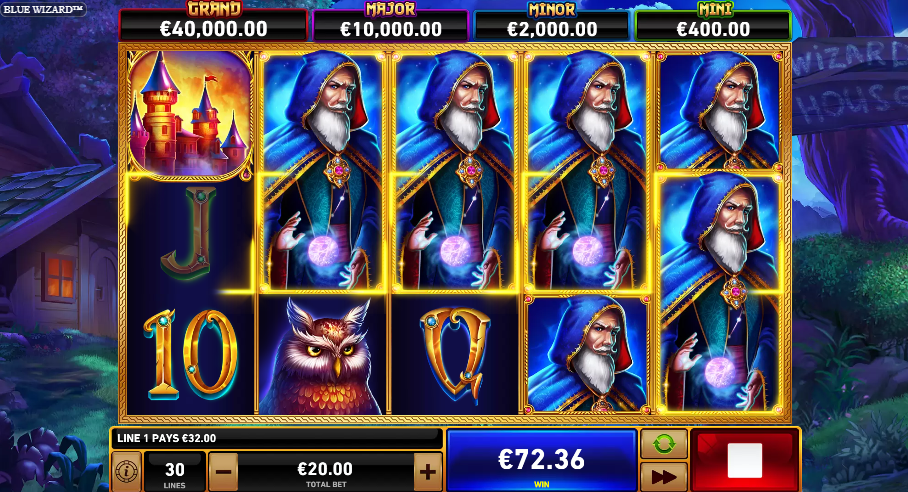 How to Play Blue Wizard Slot

Because the 30 paylines in Blue Wizard are fixed, the online variable that you need to set before pressing the spin button is the Total Bet. You can select your total bet by pressing the minus button and the plus button to the sides of the Total Bet box. You can select one of the 24 available options for the total bet starting with 10p up to £500.00. Once you’ve made your selection, you can spin the reels by pressing the green spin button in the bottom right corner of the screen.

If you want to enjoy the gameplay of Blue Wizard without pressing Spin after each round, you can use the game’s autoplay feature. This option lets you spin the reels for 5, 10, 20, 50, 100 rounds or until you land a bonus feature. Just make your selection and press Spin. You can stop the autoplay at any time by pressing Stop.

Blue Wizard is a unique game in the sense that unlike many counterparts with a bet limit up to £100 (Which is already insanely high), it can even creep up to £500.  This makes this a game with although low - medium variance and volatility, one that can reward some of the biggest wins in terms of value.  It's important to note that although there is the potential to win huge with such a high stake, that doesn't mean that your multiplied win is as big as some other games.  With a £500 bet (it sounds mad), but you can win the Grand Jackpot of £1,000,000...  Thats an "X" win of "2000X" - that's a lot, but in comparison to games like "Dead or Alive 2" where you can win up to 180,000 times your bet.  It's a drop in the ocean.  Be careful when gambling at such high stakes.  Sometimes the way to have fun is on smaller stakes.

Blue Wizard is also available as a free play version. This version is almost completely identical to the real-money version and plays just like the original. You can set your total bet, spin the reels, land winning combos and trigger the bonus features. The only difference between the two is that you can’t withdraw your winnings on the free play. This is so because you’re playing with virtual funds.

However, by spinning the free play of Blue Wizard you can get familiar with the slot and see how it plays. Spin at least 100 rounds with a different total bet to see how the game reacts and how much it pays. This amount is enough to see all game features in action and to decide whether the slot is the right for you.

How To Win Blue Wizard Slot 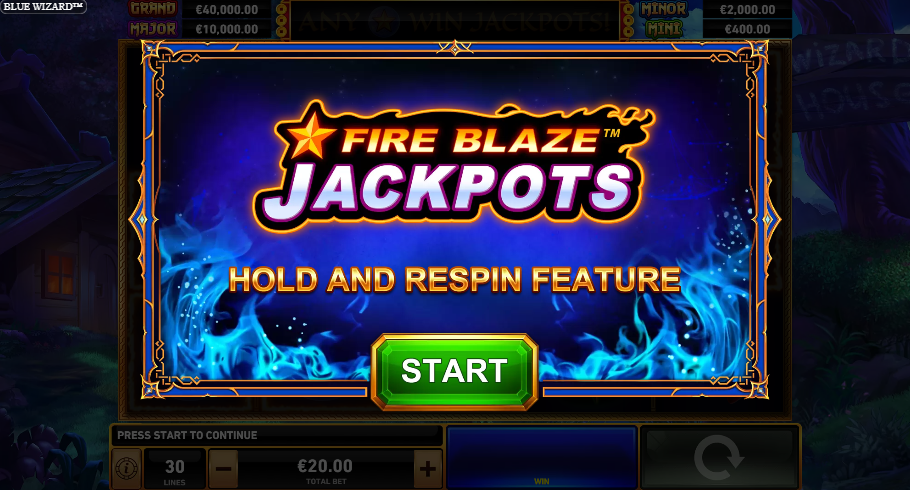 Three or more scatters trigger six Free Games. During the free games, all wilds on reel three have a multiplier attached to them. The multipliers include 2, 4, 8 and 16. Also, on the middle reel, the values on the Crystal Ball get multiplied by your total bet. So, any line including a Wild with multiplier will pay the normal win times that multiplier. Furthermore, you can re-trigger the free games from within the feature.

The RTP of the Blue Wizard slot is 96.50%. This theoretical percentage is above what is considered average on online slots, so this also adds to the quality of Blue Wizard.

It seems like Blue Wizard is a low to middle variance level online slot. So, expect anywhere from low to moderate wins with high to moderate frequency.

Blue Wizard looks modern with solid animations and graphics. However, the game makes use jackpot game which was mainly used in the past accompanied by sounds from the 1980s. It is interesting enough and the bonus features are triggered quite easily.

So, claim your welcome offer from the casinos promoted here at Slotswise and spin the reels of Blue Wizard for the chance to win big!

What does the Blue Wizard RTP stand for?

RTP is shorthand for Theoretical Return to Player, which is percentage of bets that may be gained from the house over a period of play. The RTP value for this game is listed in the game review.

Is is there a relation between Blue Wizard LOTR and this game?

The makers of this game, Rarestone Gaming, may have been inspired by the film, however, 'Magic' is a common theme in online slots, even though the wizard may appear as if belongs in the world of LOTR.

What is the Blue Wizard Slot Variance?

Blue Wizard has a low to medium volatility. This means that it is likely to payout relatively often with smaller wins, with the rarer larger ones. This is in contrast to games like Book of Dead or Bonanza which payout less frequently, but have higher potential for bigger wins.