Bombs is a pirates' battle themed slot that has a high theoretical return to player outcome of 96.61% and plays on a grid-based five reel and seven row arrangement. The game makes cluster wins and comes with a bunch of reel modifiers. The smallest bet is £0.50 and the winnings can trigger multipliers of up to 10x. A top-paying cluster of the wild brings 400x and there is the Extra Ship bonus which can appear to boost your crew's morale. 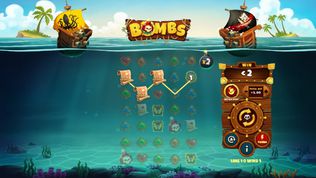 Mann the pirate ship’s cannons and send some multipliers (up to 10x) into the water, on the Bombs slots. Play to enjoy a thrilling gameplay brought to us by the slots experts at Playtech.

Right from the get go, the game loads with an underwater marvel of five horizontal lines by seven vertical ones. Each symbol takes up one spot on that grid, unless it is a colossal symbol, in which case the take-up is four points on the grid. And as the symbols are wobbling in place, there will occur underwater detonations that inflict more symbols and create the winnings that all players anticipate.

The pirate ship above water isn’t there just for show. This is the progenitor of all of the bombs that come down in the water and become lined up in one position next to the grid, and with each turn of the reels, the bombs come one row down, creating more chances to interact with what’s going on on the grid.

How to Play Bombs Slot

All of the controls that are required for the game's play are located on the device made of planks that are the casing for the steering wheel and a number of buttons that have a say in the game. The steering wheel is the Bombs slots play or start button.

The players will see that the control for the bet per spin is right above the wheel. The betting amounts on it start as low as £0.50 and there are many other amounts between that and the maximum bet of £500. This is a Playtech production so don't be surprised by that whopping sum. This company does like to give their players the option for the highest of stakes action, if there ever occurs the opportunity to make that sort of spin.

Those additional buttons on the grid are the Turbo, Automatic Spins and Paytable. The Turbo button toggled on makes the game speed up by turning and stopping the reels much sooner than usual. The Autospin on lets you kick it back and relax while the reels are turning on their own, per the number that you have specified. Last but not least the 'i' button opens up the paytable, which displays all the symbol wins and the information pertaining to the bonus features. There is another button, the one that says Extra Ship, but this will be taken up in a bit, just below.

How to Win Bombs Slot

The game has a number of high paying symnbols. The most valuable one is the Wild, which is a treasure chest that substitutes for all other symbols, except the scatter. If this symbol is part of a cluster of five, the pay will be 400x on the line bet. Four such symbols bring in 200x.

The red bomb with a pirate's skull on it is the Bombs slot scatter. It triggers the bonus spins, which in this game are called bonus bombs, on the same row. THere are few other valuable symbols. All except the cards suits pay 80x for five, or above.

Then there are the bombs that are hurled into the sea by the ships' cannons. These bombs can be multipliers from 2x to 10x, wild symbol spreaders, random cash prize kickers, bonus bomb triggers on the same row, free spins bombs and mystery bomb. All that needs to happen is for two bombs to become lined on the same row on the grid, and the rest is magic. If there are more bombs on the screen and these are triggered by a chain reaction, they will trigger more events in which the chance for bigger payout becomes bigger.

The game starts with one ship launching bombs from its cannons, but another ship can be purchased after a certain amount of the bet. Both ships can send more bombs into the sea, which increases the chances for winning combinations, albeit on a more expensive bet per spin, and that is the £5.00 minimum bet. To start your buccaneering adventure, you can make small bets of £0.50 or go with the £5.00 per spin to activate another ship.

To experience the thrilling adventure start by claiming a welcome bonus to one of the casinos and go on to explore Bombs slots.