Gem Splash: Kings Court is a new online slot from Playtech and is part of the Gem Splash series of slots. In this game, the theme is medieval and you’ll come across kings, horses and crowns on the reels. In terms of the payouts, you’ll benefit from a top prize of 180x the bet in the base game, as well as from 3 progressive jackpots whose prizes can reach thousands of pounds. The gameplay is composed of free spins and multipliers, and there’s no wild symbol. Find out more in our detailed Gem Splash: Kings Court Slot Review. 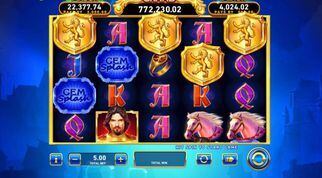 Playtech has started a new collection of online slots, called Gem Splash. The developer previously released two slots that are part of the series - the Gem Splash: Rainbows Gift slot and the Gem Splash: Marilyn Monroe slot. This time, we have the Gem Splash: Kings Court slot where we’re getting a more medieval setting. The game is played on 5 reels and 30 paylines and you’ll benefit from free spins and 3 progressive jackpots. Read our Gem Splash: Kings Court Slot Review before playing, in order to learn more about the game’s design, specifications, features, and jackpots.

Gem Splash: Kings Court is part of a slot series from Playtech which is expected to grow in the near future. While the previous games were dedicated to the Irish luck and famous actresses, this game has a medieval theme. The Gem Splash: Kings Court slot is powered by Playtech and plays on 5 reels and 30 paylines. It comes with a couple of extras that make the gameplay more exciting, including 3 progressive jackpots.

To start playing the Gem Splash: Kings Court slot, you need to set your bet per spin. As usual for the Playtech releases, you can adjust your betting from £0.10 to a maximum of £500 per spin. Just press the plus and minus buttons below the reels until you get your preferred betting option. In order to win, you need to land 3 or more matching symbols on an active payline, starting from the leftmost reel.

As we’ve mentioned above, Playtech has packed the Gem Splash: Kings Court slot with a couple of bonus features, including free spins, gem drops, colossal symbols, and more. Plus, you’ll get the opportunity to win one of the 3 available progressive jackpots, whose value can grow in thousands of pounds. We’ll explain these in more detail below in our Gem Splash: Kings Court Slot Review.

When it comes to the design of the Gem Splash: Kings Court slot, we can say that it’s simple and high-quality. The reel set is placed on a blue background where you’ll notice a couple of medieval castles, surrounded by fog. There is also a common soundtrack that changes when you land a winning combination.

On the reels, you’ll find the standard Royal symbols (J, Q, K, and A) as the lower value ones. They are accompanied by the high-paying symbols, designed as a ring, crown, white horse, and the king. Of course, the king is the top-paying symbol that pays up to 6x the stake for 5 on a payline. Surprisingly, the game doesn’t feature a wild symbol. But, there is a scatter symbol, designed as a golden shield, which triggers the free spins feature.

The theoretical RTP of the Gem Splash: Kings Court slot is 96.37%, which is the industry average. This includes the contribution to the progressive jackpots (which is 3.99%). The game’s variance is medium, meaning that you’ll get the best from both low and high variance slots. You can expect to land both low and high-sized winnings. When playing the Gem Splash: Kings Court slot, ensure to set your bets correctly to be comfortable with your gameplay. Here you can read more about the Variance, Volatility and RTP in online slots and see which one suits you best.

While you play the Gem Splash: Kings Court slot, you’ll notice that it has straightforward gameplay where a couple of features are included. There, the Gem Drop and Gem Splash symbols are in the focus of the action. You’ll get the chance to trigger the Gem Splash feature or win a number of free spins, part of the Free Spins feature. What’s more, if you get lucky, you’ll get your hands on one of the 3 progressive jackpots and win a generous prize. Let’s see how these features work.

If you land 3, 4, or 5 golden shield scatter symbols on the reels, you’ll trigger the Free Spins feature. Then, you’ll receive 6 free spins and a multiplier attached to them. The value of the multiplier depends on the number of scatter symbols that triggered the feature:

In the Free Spins mode, all Gem Drop symbols are removed from the reels and you can land new ones. But, the Free Spins feature has colossal versions for the Gem Drops, so they can appear as 2x2, 3x3 and even 4x4 symbols. Prizes on each big Gem Drop are worth between 3 and 20x the stake. At the same time, the Gem Splash symbols are stacked. This will help you form winning combinations more easily. In addition, landing 3 or more scatters during the Free Spins will give you another 6 free spins to play with, without limitations.

The Gem Splash: Kings Court slot is mobile-friendly and you can play it on any mobile and tablet device. It is developed with HTML5 and can adjust to any small screen, on any operating system. You’ll receive the same high-quality design and gameplay when playing on a mobile device.

Is there a Jackpot on Gem Splash: Kings Court Slot?

As we’ve mentioned above in our Gem Splash: Kings Court Slot Review, the game comes with 3 progressive jackpots, which are part of the Gem Splash Jackpot feature. This feature can be randomly triggered on any spin. When it’s triggered, a large gemstone will appear on the screen until it awards one of the following prizes:

Since the Minor, Major and Grand jackpots are progressive jackpots, their amount can be different. You can see the current amount of each jackpot in the meters above the reels.

Playtech is an established slots developer that has come up with many new releases in the past few months. If you’re interested in playing other Playtech slots, we recommend you to check the Buccaneer Bells: Fire Blaze Golden slot. It’s a pirate-themed game where 4 fixed jackpots are included, as well as free spins with multipliers. In addition, if you’ve liked the original Anaconda Wild slot that was released a couple of years ago, you’ll like its new version called Anaconda Wild 2 slot. There, you’ll benefit from wilds, wild respins, and 25x multipliers, and play for the chance to win up to 25,000x the stake. Or, if you’re more of a magic-themed slots fan, we recommend you to check the Sorcerer’s Guild on Magic slot.

Just like the other slots in the Gem Splash series, so does this one comes with straightforward gameplay and a number of features. There, the main focus will be the progressive jackpots, from which you can win huge prizes. We also liked the medium variance which makes the game ideal for all types of players.

Rich Wilde and the Shield of Athena