The game unfolds on five reels and five rows that spin on a grid-based playing field. Payouts are made in clusters and players can play with at little as 20p per spin. Golden Ticket 2 has a theoretical return to player of 96.50%, high variance and a maximum payout potential of 5000x multiplied by the winning bet. 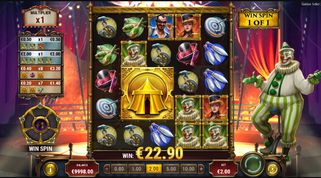 Having a golden ticket is the only way to get to see the show of that involves an extraordinary crew of circus performers. The ringleader is Play'n GO who has created a beautiful game that plays on an even reel set that is paired with a win meter display and a wilds counter, which is part of the dynamic gameplay. Golden Ticket 2 slot packs a lot of action and even more so than the original game.

In terms of the gameplay, a solid base game action can tie up between any set of spins, especially considering the cascading win payout mechanic which produces win multipliers. Wild symbols are an important part of the gameplay, as there isn't only a single type of this symbol. Play'n Go has introduced a free spins bonus divided in three modes, so that the players can try a different hand for a chance at some big wins.

You can't go wrong with playing a remake by Play'n GO as it is certain that the slot designers will make no mistake in bringing the best out of the original. This is very much so the case for Golden Ticket 2 slots, which offers a tiny world of circus acts in the symbols and three personalities represented by the clown, the danger man and the daring lion-tamer lady.

Winning outcomes get a show of lights around the symbols and there is constant movement on the playing field thanks to the cascading wins payout system. The meter is constantly nudged with new details as a result of a string of subsequent wins and there is quite a decent musical theme that the players can enjoy throughout the gameplay.

How to Play Golden Ticket 2 Slot

As it is customary for games by this company, all of the settings are at the very bottom of the screen. The sliding scale with presets on it is where players can select the bet per spin. The smallest bet is 20p and the maximum is £100.00 for each turn, with plenty of options in-between.

On both sides of the bet setting are displays that show the balance and the bet amount. The buttons for Spin and Autoplay are in the bottom right corner. The bigger of the two buttons causes the reels to spin one time and the smaller one opens up the autoplay settings.

Perhaps the best way to play the Golden Ticket 2 slot is by watching the reel action unfold on its own. Selecting a number of automatic spins from the presets avails that, and just in case there are few optional settings for this mode.

Last but not least, there are few settings in the bottom left. Players can turn on and off the sound, make the reels spin faster, view the bet history and open up the menu along with the paytable.

How to Win Golden Ticket 2 Slots

Winning at the game requires clusters that consist of at least three symbols, which must appear horizontally or vertically on the grid. It is possible to land multiple winning outcomes from the same spin, and/or outcomes that number a greater number of matching symbols.

In terms of payouts, Golden Ticket 2 slot has the danger man as its most valuable symbol, but right up there in the same rang are the clown and the lion tamer, which are the high-paying symbols. The wild is, however, the most valuable symbol, paying 50x multiplied by the bet for five of the same.

All other symbols pay lesser amounts, but this has to be considered not as a weak slot, but as a result of the cascading wins payout system.

Part of the extra features are the win multipliers. These are applicable to every cascading win in the base game and in the free spins bonus. Base game causes 1x to add for each win.

One of the biggest single-win events, which is a big win nevertheless, is valued 500x multiplied by the bet and can occur if the screen gets cleared of all symbols in a succession of wins that have started from a single bet.

Wilds are ubiquitous in Golden Ticket 2 as they are added to the grid once a winning outcome of three of a kind is deducted from the screen. Stronger wins mean more wilds are added to the win meter on the left, which can turn up multiplier wilds of up to 3x.

The bonus feature is triggered when the word BONUS shows on the grid, which is possible by landing successive wins. In the event, players choose between

The game is available as a free play demo slot at online casinos that have slots in practice play mode. This means, free credits are available to infinity and back, but cash winnings can’t be paid in actual cash, just as a show of the gameplay and its features.

It’s a marvelous take on the circus theme, this game, and slots pros will recognize the qualities following several spins. The most striking detail is the highest volatility. Wins will tend to be small, but the possibility of pushing the game into a high-paying frenzy is there.

Claim a welcome offer from this page and discover Golden Ticket 2 slot at top-rated online casinos.