Quest West is a five-reel online slot from Playtech which uses paylines for forming winning combinations. Among the main features of the Quest West slot are stacked wild symbols, scatter symbols, and free spins. The game has 50 active paylines and the highest paying symbol gives up to £10,000. This is an Asian-themed online slot with bright colours and high-quality game features. Continue reading this Quest West Slot Review and find out more about this game. 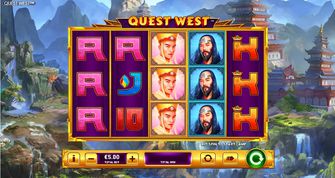 Get ready to travel to the West where you’ll be greeted with a lot of fun and huge winnings, playing the Quest West slot. Quest West is one of those Asian-themed online slots with incredible graphics and funny sounds released by Playtech. It’s built with five reels and three rows and you’ll need to land paylines to form winning combinations. Namely, Quest West has 50 active paylines so there are plenty of options.

The average Return to Player (RTP) percentage of the Quest West slot is 96.45%, which is a good and an average RTP for an online slot. The RTP stands for the percentage of stakes that the game returns to the players. For example, if you bet £100, the expected return would be £96.45. The variance is high which means that Quest West won’t land winning combinations too often but it has the potential for landing combinations with larger prizes.

The minimum bet that you can place in Quest West is £0.50, while the maximum is £500. So, there is a great choice to suit every player’s budget. The highest-paying symbol has the potential of rewarding 1,000x the stake. In terms of the game’s features, the Quest West slot has plenty to offer. There is a free spins bonus feature, as well as wild and bonus symbols. We also liked the fact that if you’re lucky, the giant symbol can fill all the reels at once.

As far as the design quality of Quest West is concerned, this game has a wonderful design with high-quality graphics. When you open the Quest West slot, you’ll notice that it’s located in a typical Chinese environment with traditional buildings and waterfalls. The game uses different symbols, from Asian-themed symbols to the usual royals.

You’ll find some characters from the legends of China, including the Monkey Warrior, the Pig Monk, and two warriors. They represent some of the major symbols in this game. Additionally, there is a wild symbol with the name ‘WILD’ on it, as well as a scatter symbol designed as a Chinese flower. The other low-paying symbols include royals such as R, K, Q, J, and 10.

How To Play Quest West Slot

Your Asian adventure can start by adjusting your bet amount under the reels. As previously mentioned, you can set your bet per spin starting from £0.50 and going up to £500. When you open the Quest West Slot, you’ll notice a golden bar under the reels, where you need to press the plus and minus buttons in order to adjust your desired bet per spin. The game will show you the total bet amount and you’re ready to start spinning the reels. Once you’re ready, press the green Spin button and you’ll start playing.

The winning outcomes are displayed in the same bar under the reels next to the ‘Total Bet’ section. In the same area, you can find the paytable by pressing the ‘i’ button in the bottom left corner of the screen. Moreover, you can turn on or off the sound by selecting the speaker button and activate the Autoplay or the Turbo Mode feature.

The Autoplay is a great feature that you can take advantage of. It allows the game to spins for itself for the number of spins that you select. In this way, you can sit relaxed and hope for landing winning combinations while the game does the full job. You can also press TURBO to enable/disable some of the win animations and sounds, making the reels spin faster or at normal speed.

How To Win Quest West Slot

When you start playing the Quest West slot, you will begin your adventure on five reels, three rows and 50 active paylines. In order to form a winning combination, you have to land matching symbols on adjacent reels starting from the leftmost reel. Wins are calculated according to the paytable, so make sure to check it before you start playing.

In addition, there are some Quest West slot bonus features that can give you more winnings, as well as to increase your existing ones.

The scatter symbol is the Flower which appears only on reels 2, 3, and 4. Once triggered, this bonus feature will give you seven free spins to play with. The free games are played with the same bet that was adjusted on the spin that triggered them and they cannot be triggered again during the free spins.

Furthermore, another great bonus feature at the Quest West slot is the stacked wild symbol that can substitute any other symbol except the scatter. Wild symbols help players to make the best possible winning combinations. The wild symbol can appear anywhere on the reels and it has the ability to expand covering an entire reel.

The Quest West slot by Playtech is also available as a free play demo version at online casinos that host demo slots. In this version, players get free credits that cannot give real winnings. The demo version of Quest West is a great way for you to try the game and see how it works, before wagering your own money.

All things considered, Playtech knows how to make a great game. Quest West is a beautiful game with excellent design and high-quality graphics. Moreover, there is a free spins bonus feature as well as wild and stacked symbols that contribute to the whole gameplay. The RTP is decent and average, being at 96.45%.

Discover the Quest West slot by claiming a welcome offer right from this page and play at top-rated online casinos.