Discover a futuristic slot by Playtech that plays on 30 paylines which expand to 60 in the free spins bonus feature. The game has a few features that may make it worthwhile playing, either for the potential wins or for the gaming adventure. The maximum exposure is a decent sum and there are multipliers of x5 and respins. 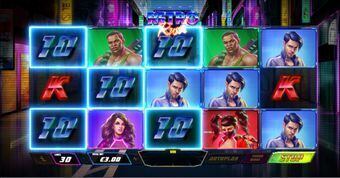 Discover the streets of a futuristic neon city in the Retro Rush slot and spin for a chance to win up to 6000x.

Even though the word Retro informs the personality of the game at hand, the premise is set in a futuristic city inhabited by superhero-like personalities who are the game's lead symbols.

Retro Rush slot comes from Playtech's kitchen and by the looks of it, it makes semblance to another of their games released in recent times - Spy Rise slot. Nevertheless, the Retro Rush slot offers a different set of gameplay details.

In this game, the players will find a reel-set of three rows and five reels, however, we are not limited to this infrastructure. The free spins bonus game expands the reel-set, as well as the number of paylines, which are doubled to 60.

As we expected, wins are made with three or more matching symbols, but there are also respins when a winning outcome has been posted, which can be expanded on.

The main quality of the game in terms of graphic design is its neon-themed layout. The reel-set of Retro Rush slot displays a set of futuristic-looking symbols. The royal cards have been given that retro/neon layover while the high paying symbols appear as characters from the world in which the movie Demolition Man takes place.

Nevertheless, Retro Rush slot can spin up a rush of sorts both in the base game and in the bonus feature. The speed bike riding game is meant to capture the essence of the game and sort of manages to do so, mostly because the reel-set expands to twice its original size and offers 60 paylines.

The musical theme in Retro Rush slot fits the environment quite well making this game an amusing gaming experience.

How to Play Retro Rush Slot

Your adventure through the streets of this futuristic city can begin with the push of the spin button, which can be found in the bottom right corner of the screen.

Before start playing the game, players are required to choose their bet per spin. This can be done by pressing the minus and plus buttons in the bottom left corner of the screen.

Retro Rush slot has 30 always active paylines and a small bet of £0.15 per spin which reflects as half of a penny per payline. The maximum bet is £300.00 per spin and this is a £10.00 multiplier on the payline win.

A window in the centre bottom area of the reel-set displays the concurrent payout and to the right of there are three buttons: autoplay, turbo mode, and spin.

The first button allows the players to choose from the available automatic spins presets. When the second button is toggled on the game spins and stops the reels faster.

And finally, the green rectangle causes the reels to spin once for each turn, deducting the selected bet once from the available balance.

How to Win Retro Rush Slot

Winning in the game requires symbol wins of three or more matching symbols. These can be from the high-paying picture symbols or the cards. However, the Retro Rush slot offers a few extras that can improve the odds of winning.

When a win outcome posts on the reel-set, the game goes for a respin. As long as a new matching symbol is added to the combination on the respin, the respins will continue. Furthermore, the game has wild symbols which can add multipliers of 2x, 3x and 5x.

The high-paying symbols are five characters from this futuristic world. There is an old gentleman who seems like the mastermind of something, a katana-wielding she-ninja, a strongman who is the equivalent of the Incredible Hulk, and the two motor racers.

The bonus game is triggered by the scatter symbol, which is a takeout container for Chinese food. Three of these stopping anywhere on the reel-set trigger five free spins.

Like we said, in the feature, the reel-set expands to six rows and five reels and symbols can drape across the entire reel to a greater win effect.

A random event, winning outcomes may stick on the reels in the bonus game as well, for the potential bigger win.

Playtech have released some of their most exciting slots as free play demos. One of the many examples is the Starmada Exiles slot. This game is bound to be released for free play too at online casinos that host demo slots.

This is another Playtech release that isn’t going to stir the waters in the online gaming community, precisely because it offers a gameplay that’s been seen already. The graphics design isn’t going to impress too many people.

So what’s left are the features. Up to 5x on the wilds is a rare event, but the respins may bump up your wins. Also, six free spins on the feature are too few for anyone to consider staying on Retro Rush for the bonus to trigger.

On the other hand, the maximum exposure is 6000x, which is an extremely rare outcome nevertheless.

Discover the Retro Rush slot by claiming a welcome offer right from this page and play at top-notch online casinos.

What is the RTP of Retro Rush slot?

Retro Rush has an RTP of 96.10%. This is an average return to player percentage, fair and standard number for online slots these days. With an RTP of 96.10%, you can expect that Retro Rush will pay out about £96.10 for every £100 wagered.

How to trigger free spins in Retro Rush slot?

To trigger the free spins bonus in Retro Rush slot, you have to land three scatter symbols anywhere on the reels. That will give you five free spins to play with. During the free spins, the reel-set expands to six rows and five reels and symbols can drape across the entire reel to a greater win effect.

What is the biggest payout available on Retro Rush slot?

The biggest payout that can be achieved in the base game in Retro Rush is up to 3,000x your stake on a single spin. However, during the free spins bonus game, the paylines are doubled which means that the potential payout is up to 6,000x the stake.