Spin the reels of the zombie-infested Scatter Brains 2 slot from Playtech for the chance to win big! Playable across five reels and with 243 ways to win, the game provides plenty of win opportunities. As if this isn't enough, it has a free-spins round and a re-spin feature to provide even more chances for landing a winning combo. Playable from £0.10 up to £500 a spin, the slot caters to different kinds of players. So, claim your welcome offer from the casinos featured here at Slotswise and spin for the chance to win big on Scatter Brains 2!

The zombie apocalypse craze has reached the online slots with Scatter Brains 2 slot from Playtech. You fight your way through the army of the living dead across five reels and 243 ways to win. You can win hefty prizes during your play with the help of zombie wilds, free spins, re-spins and 3x multipliers. With a bet range between £0.10 up to £500 and an RTP 94.03%, you have a chance to win the maximum payout of £3,000!

Introducing Scatter Brains 2 slot, a five-reel and three rows online slots that takes place in a city struck by a zombie apocalypse. The game comes from Playtech, so you wouldn't expect anything less than a solid gaming adventure.

Once you launch the game, you can see that everything is designed with the zombie theme in mind. The reel set occupies the centre of the screen placed against a background of some dilapidated building. The Scatter Brains 2 logo is at the top of the screen while the area below the reels is reserved for the information section. On the left, you can find the options for the bet, while the Spin button is on the opposite side. 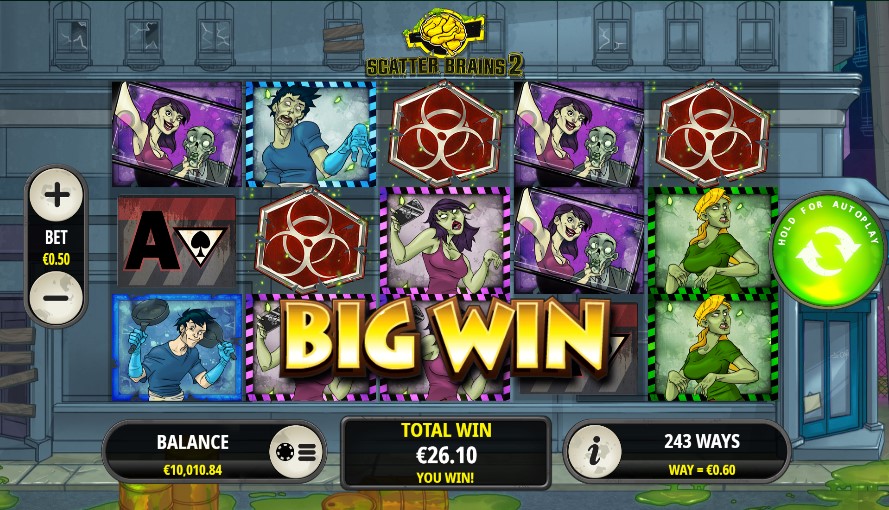 The low-value symbols start with the Jack and end with the Ace. These pay somewhat less than the picture symbols, which are the high values.

The group of high-value symbols include a girl taking a selfie with a zombie, a girl with a Molotov cocktail, a guy with a frying pan, a girl with a hatchet, and a guy with a crowbar. Each of these protagonist symbols has its own equivalent of a zombified version. The symbols flip during the bonus game, but they do pay the same.

How To Play Scatter Brains 2 Slot

Since the 243 ways to win in Scatter Brains 2 slot are fixed the only variable for you to set is the bet per spin. By pressing the plus and minus buttons on the left of the reel set, you can go through all available options for the bet per spin. They start as low as £0.10 per spin and go up to £500.00. So, as you can see, Scatter Brains 2 caters to players of different bankrolls.

Once you’ve set your bet for the spin, it’s time to get the reels spinning. On the right of the reel set, you will find the green Spin button. Click on it and the game begins hopefully ending the round with a winning combination.

If you hold the Spin button, a new screen will appear with options for the autoplay. You need to decide on your stake per play, the number of plays and loss limit and press CONFIRM to start the reels spinning. You can stop the autoplay at any given time by pressing STOP AUTOPLAY.

If you want to find out information on the rules of the game, the paytable and other additional information, just press the information ‘i’ button below reel four.

If you want to try the gameplay of Scatter Brains 2 slot before depositing, you should go for its free play or demo version. This version lets you try everything in the game and see all the features in action. Thus, you can set the bet, spin the reels and trigger the bonus rounds. The free play is almost identical to the real-money version of Scatter Brains 2. The only difference is that you can’t bank any eventual wins during the free play.

How To Win Scatter Brains 2

As with all online slots, winning payouts in Scatter Brains 2 slot are awarded for landing combinations of matching symbols on the reels. The amount that you receive is dependent on both the type of symbol and how many symbols form the winning combo. As we have already mentioned, all symbols in Scatter Brains 2 award certain payouts for combinations of three, four and five matching symbols.

Only the highest win per way is paid with all symbol combinations pay from left to right, starting from the reel one. This is not the case for SCATTER wins which pay any. The scatter wins are multiplied by the total bet and added to ways wins.

The game's most valuable symbol is the crowbar guy who pays £3,000 for a string of five. What is more, this symbol can be substituted by the wild. The Scatter is also a very lucrative symbol, paying £2,500 for three-of-a-kind combo. 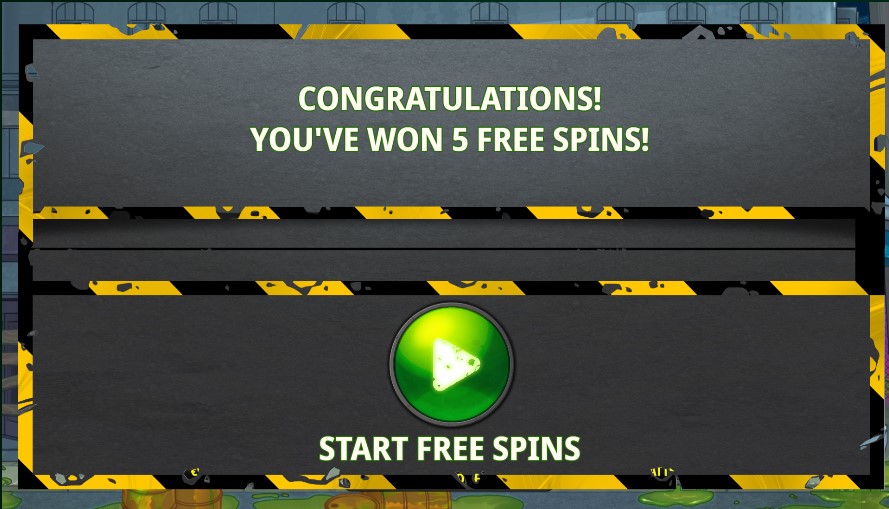 Landing three or more of the Scatter symbols starts the free spins game. During the feature, that symbol is replaced by the Feature Wild symbol, which is the same one except it is glowing red.  The Feature Wild substitutes for all symbols and adds a 3x multiplier. During the spins, three zombies walk across the screen adding three wilds to the reels. If the turn a picture symbol into its zombie version, you’ll receive one re-spin.

The RTP of Scatter Brains 2 is 94.03% which is not the highest we’ve seen in slots, but not the lowest either. The RTP is a theoretical calculation of how much a slot returns in the long run. The higher the percentage, the better, but this percentage is always below 100%.

The variance of Scatter Brains 2 is set at a medium to high level. This means that you will land wins not that often and most of them will be of moderate amount. However, when you do land a big win, it’ll be a huge one.

As with almost all new online slots that come from the studios of Playtech, Scatter Brains 2 is also optimized for different devices. So, whether you are playing on a desktop or a mobile device, rest assured that you’ll get the same quality. You can spin the reels of Scatter Brains 2 both on iOS and Android devices without downloading any software or app. Just launch the game in your browser and start spinning!

Scatter Brains 2 from Playtech is a nice addition to the zombie theme. The game has crisp graphics and great winning potential with the 243 ways to win. The free spins round and the re-spin feature also add to the overall quality of the game.

If you want to try your luck against the zombie hordes, claim your welcome offer from the casinos promoted here at Slotswise and spin for the chance to win big!