Play the Tiger Turtle Dragon Phoenix slot for a chance to win one of four jackpots, the biggest of which is 2,000,000 pounds, with the biggest wager of 500. The game has five reels and 243 ways to pay. The theoretical Return to Player is 96.94% and a free spins bonus feature which grants eight free spins and wild symbol multipliers of 2x and 3x. 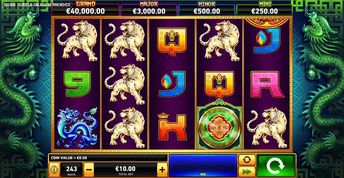 Playtech are the slots experts behind the Far East themed slot game that is a fusion of a retro-feel slot and a full online slot that comes with bonus features, hefty symbol payouts, as well as four jackpots.

The Tiger Turtle Dragon Phoenix slot has 243 ways to pay, making it the basic megaways style of play that is quite popular. No matter the size of the bet, the players will have that amount play across all 243 ways. The bet can be set by selecting the preferred amount from the Total Bet window below the reels, and by using the minus and plus buttons.

The action starts with the push of the Spin button in the bottom right corner of the screen. To the left of this button is the auto spin option which lets the players select a number from the sliding scale. Because this slot doesn't have an advanced options tab, the players just need to be mindful of their balance or select a bet that avails a stretch of turns that will not sink the balance in just a few spins.

For those who want to see the reels turn and stop faster, a fast forward symbol is found just below the autoplay button. This toggled on will speed things up.

The game's paytable can be accessed from the bottom left corner of the page. This is where the players can find out about the symbol pays, the role of the wild multipliers, what the scatter symbol does, the jackpot feature trigger and other details such as the Tiger Turtle Dragon Phoenix slot rules.

The symbol wins are expressed in a number that represents a multiplier on the entire winning bet, so the most valuable symbol of the blue dragon pays 100x on the winning bet, followed by the tiger symbol of 48x, the hydra which pays 32x and the green dragon paying 24x. These potential outcomes are for a string of five matching symbols. Any of the above-mentioned symbols can be substituted by the wild.

The category of lower-pay symbols consists of the high cards, starting with the nine and ending with the ace. Each one of these symbols pays the same amounts for combinations of three, four and five symbols - respectively 2x, 4x, and 8x.

The game's wild symbols represent one of the ways of boosting the winnings. The standard wild substitutes for all, except the scatter and the wild multipliers. This symbol appears on the middle reel in the base game and on the middle three reels during the free spins.

The 2x Wild appears only during the free spins and on the middle third reel. If two of these symbols are part of a winning combination, the prize will reflect an additional 2x multiplier. The 3x Wild does the same as the 2x wild, except it participates in better pay outcomes.

The scatter symbol appears online on the middle three reels. When three of these land on the stated reels, on any position, a free spins game is given, plus a double multiplier on the winning bet. The players witness eight Tiger Turtle Dragon Phoenix free spins, which can be retriggered when another three scatters land in the middle three reels. What is more, the Wild 2x and 3x appear on the third reel.

The game has a theoretical Return to Player outcome of 96.94%, which is significantly above the average. An RTP of 97.00% is considered a cut-off point for the high return to player outcomes.

The jackpot bonus feature is triggered when the golden shield appears behind any of the game's symbols, albeit only on reels one and five. Once on the second screen game, the player will see 12 scroll and pick three matching ones which correspond to the jackpot size. There can be only one jackpot bonus feature per spin and it can occur and be awarded during the free spins bonus feature and in the base game.

A game of four possible jackpots and some hefty symbol win multipliers, which could work in pair with the game’s wild multiplier symbols. All to the effect of exciting pays and a gameplay that can impress. The game should be considered as potential if anyone sees something appealing in it besides the potential jackpot prize.

Play Tiger Turtle Dragon Phoenix slot at one of the online casinos on this page. Claim a welcome offer to start your casino adventure.

Legend of the Four Beasts

Do I need to download Tiger Turtle Dragon Phoenix slot?

You don’t need to download anything in order for you to play the Tiger Turtle Dragon Phoenix slot. Instead, you can play it directly from browser on your computer, mobile or tablet. However, there are some online casinos that have their own apps. If you choose to play at such an online casino, you will need to download the app so that you can spin the reels on this slot.

What is the RTP of Tiger Turtle Dragon Phoenix slot?

The game has a theoretical Return to Player of 96.94%, which is significantly above the average. This means that you'll get £96.94 back for every £100 you wager.

Yes, you can trigger free spins bonus in this game by landing three scatter symbols on any position. Once landed, you'll receive eight free spins.

How does the jackpot work in Tiger Turtle Dragon Phoenix slot?