A funky slot by Playtech takes one of Spain's funniest people and puts him on the five reels and three rows of the Torrente Again slots. The game has 243 ways to pay, two jackpots and more than one bonus feature. 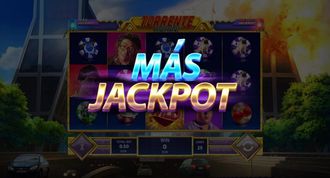 Discover the hilarious Torrente Again slot and play for a chance to win bonus features and one of the jackpot prizes.

Torrente is a legendary Spanish television show involving a police officer who is a fine example of who not to hire on the force. Of course, this is a comedy show, not the first, not the last, but what makes it memorable are Torrente's antics, the lewd gimmicks, the language and the mishaps.

Playtech were quick to jump on the franchise's absence in the world of online slots, so they've released the Torrente Again slot. So what does the game bring to players who don't know the first thing about the show or the four movies that have been released under that name? For starters, Torrente Again offers few extras and two bonus features.

The game is more engaging as one would expect, possibly because of the detective side game and the possibility of more than five wilds occurring on the reel-set. Wins are made with three or more symbols of the same kind, from left to right and the reel-set consists of three rows and five reels that spin across 25 always active paylines.

Typical for Playtech games that are based on franchise and licenced material, the game offers portraits for the high-paying symbols. These represent the characters of the Torrente shows and movies. The low paying symbols are poker chips that carry tongue in cheek referrenes. For example, the orange chip has a bra across it. Go figure, but hey, that's Torrente Again slots for you.

Although there isn't much going on the reel-set in terms of graphics design and especially animation, the game offers moments of engaging motions during the side games and bonus features. These are entertaining and can help towards a big win. A musical score exists in the vein of a detective movie theme and there are some funky punctuation sounds throughout the gameplay.

How to Play Torrente Again Slot

Start the game by pressing the big red 'spin' button shaped as a square and located in the bottom right corner of the screen. This will send the reels spinning once and deduct the selected bet once as well.

To the left of it is the autoplay button which lets the players select from the available automatic spins presets, but not more than that.

To select the bets use the Total Bet button and the plus and minus buttons next to it to browse through the available figures. The smallest bet per spin in Torrente Again slot is £0.10 and, what is usual for Playtech, the maximum bet is £500.00 per spin.

The paytavle is available in the bottom left corner of the screen. This is where the players can view the symbol payouts and get information about the bonus features, such as what triggers them and more.

How to Win Torrente Again Slots

Before anything else, this is a jackpot game with two tiers - Mas and Menos - that is, More and Less Jackpot when translated from Spanish. Either one of these prizes is possible in the side game where the jackpot play takes place.

As it was expected, Playtech isn't offering huge payouts even for five symbols of a kind. This is because the game has more than just one bonus feature and it is here where the players can ring-in some sweet wins.

Getting three scatter symbols anywhere on the screen triggers a pick-me screen where players can choose between the Naughty Night and Office Slave.

The first game is a free spins bonus with random wilds. At the start of the game and throughout it a number of wilds can appear on the screen, helping towards the wins.

The other game is a straight up cash bonus which rewards a random cash amount. The detective game is where the players can pick from a range of Torrente polaroid pictures and each reveals a prize.

Tongue in cheek jokes are made in passing throughout the game, including the free spins bonus where Torrente does it Again, casually lanking across the reel-set holding one of those funny human sized dolls.

Playtech have released even their best online slots as free play demo, so it can be expected that they will do the same with Torrente Again. Chances for this are higher because this is a jackpot slot that the company would like to promote.

Most people will ask, who is Torrente and why should I care. If you really want to immerse yourself in this online slot we’d recommend watching one of the movies, which are hilarious to say the least. Then the slot game makes more sense. At any rate, the potential wins and the bonus features are enough to let us in on the Torrente hype.