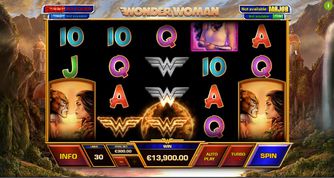 Play the Wonder Woman slots for a chance to win amazing prizes on the base game, or the bonus features. This slot has four amazing jackpot prizes too.

In street speak, one could say that Playtech have a license to ill. That is to say that they have been on top of their productions for many long years. Their slots do not disappoint. The same is true of the Wonder Woman slot, which this company has got the licence to immortalize into a slot game. We have here a marvelously designed game with a reel-set of four rows, five reels and 30 always-active paylines.

Wonder Woman the online slot arguably offers as much action as the Wonder Woman movie franchise. Well, that depends on how you see things, but the slots players would understand what this means. With this release we have several bonus features and four jackpot levels that can be won at the whim of the random number generating machine.

At any rate, this Playtech release acts and feels like a comic book that is such a page turner that the pages literally turn with the reels, along with the picture symbols that are pertinent to the WW franchise. The four rows and five reels arrangement is nothing now in the world of Playtech. They have many slots that are based on popular movies built in the same style, and for most players that means more fun on the reels.

The high win symbols echo dramatic dealings between the underworld and ours, where two of the highest paying picture symbols are those that portray villainous characters. All this comes to life with the Fire Wild free spins, as well as with the Stacked Symbols feature, and the few other bonus features in Wonder Woman slots.

To get a taste of the action you can explore this read to get more insights about the game, or simply go on to claim a welcome bonus and discover it all on your own.

How to Play Wonder Woman Slot

Setting up for the gameplay on a Playtech slot is as pleasurable as seeing the reels shake out something delicious for the win. The lines are all active, and that is displayed in the square that is to the right of the Info button, located in the bottom corner and standing for the paytable. The total bet is set from the button to the right of these two. The smallest bet starts at £0.15, which is quite a surprise because some Playtech games start at a high £0.50. Even more so is this odd given that Wonder Woman slot is a jackpot game.

Despite this, the bets continue in low increments of 15 cents until the £1.00 mark is reached, and from there on, the increments become greater. The players could select any amount that exists in-between the two extremes of the smallest and the biggest bet. The maximum that could be played per spin is a whopping £300, however, this and other high amounts come with greater sums that are gained on the strong symbol pays.

As for the Autoplay Mode, it provides the option of setting the reels turn on their own for a specified number of times, while the Turbo Mode simply speeds up that process so that the duration of each turn is cut to less then a second.

How To Win Wonder Woman Slots

When it comes to the potential winning outcomes, let's start with one of the bonus features. Landing the specialty symbol of Wonder Woman and the Cheetah face to face, will take the player to a second screen where there are three options for the free spins bonus: Wonder Woman, The Cheetah and Fire Wild. The player can't select the option on his or her own, rather it is a randomly given outcome.

The Cheetah Free Games stat with 12 free spins. In this and the other bonus spins, landing additional two of the Wonder Woman vs Cheetah symbol will trigger yet another 12 free spins, which is an amazing thing because usually the retriggers come with fewer spins. At any rate, the picture symbols have the ability to expand and cover many squares on the grid, thus increasing the potential winnings, as well as being replaced by the strongest two symbols of the game, all for a chance to land bigger winnings.

This slot's jackpot winners are those players who have landed one of the four mystery progressive pots. This can happen with any spin and is given by random. What is more, the winning bet can by any, so pennies or high stakes, all bets are eligible for the big win. Once the jackpot game has been triggered, the player is taken to a screen of 20 jackpot icons. The player needs to match the colors of the hexagons that match the jackpot prize. If the player can't muster up that momentary grit and select the fields, the Wonder Woman slot will do that on the whim of its own volition.

To start your adventure on the Wonder Woman slot, you can select one of the welcome bonuses and head on to play at the casino of your choice, right from this page.