An amazing production by DiceLab and supported by Relax Gaming is all about cluster wins created by matching dice. A set of reel modifiers can cause explosions on the set and bring guaranteed wins, but there is also a free spins bonus feature with multipliers. All in all, an excellent game to try out, definitely engaging with its unique features. 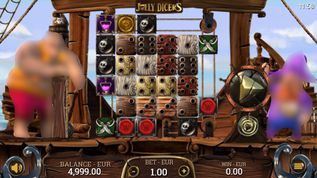 Speaking of original ideas, here is a Relax Gaming supported studio called DiceLab who've created a pirate-themed online slot adventure that's all about marauding the seas in pursuit of seeing some dice that match. It sounds odd but wait until you play the game yourself at one of the online casinos on this page.

The Jolly Dicers slot is a game of four horizontal and four vertical rows. These offer collapsing/cascading wins whenever a set of matching dice occurs on the turn.

Not lacking are the reel modifiers which are represented by a number of symbols that are hoisted up on the screen with each spin. These have to match in order to cast their effect.

The reel set of 4x4 can expand to a full of 6x6 with the help of these reel modifiers, while the win outcomes of matching dice clusters are still paid according to the same logic on the expanded reels too.

Jolly Dicers has a free spins bonus, multiplier increase, a theoretical return to player of 96.39% and a medium to high variance. The game can trigger winning outcomes of up to 533x on the winning bet, with the help of the multipliers.

If we judge the shape of things to come for DiceLab according to this release, our crystal ball shows many spectacular games ahead and that is because we have a terrific primer in Jolly Dicers slots. The game is one big contraption of moving parts, including the dicers who jollily pull the cranks, levers and the ship's helm.

The dice have been rendered in a way that makes each appear as if carved out of a specific type of wood. The surroundings to the reel-set are a ship at sea, ropes and just lots of wooden frames and a deck. And last but not least, the couldn't have done it so well without humming along to a pirate themed song, which has been masterfully made to suit the action.

How to Play Jolly Dicers Slot

You can start sailing with the push of the Play button which is on the helm itself. Below it is the button for Autoplay and the remaining menu buttons and settings are at the bottom. The balance is stated in the bottom left area and the latest win is shown in the bottom right.

To change the bet press the minus or plus button so that the grid of bet amounts opens up in front of you. The smallest bet that you can wager with the pirates is ten pennies per spin. The biggest bet is a whole lot of a £100.00 per spin but there are multiple amounts between these to offer small, medium and high stakes.

If you wish you engage Jolly Dicers slot hands-free, there is the autoplay button. Press it to load the menu and select from the automatic spins presets, which start at 10 and end with 100. There is the option for the game to play until infinity (let there be infinite wins then), but there are also the optional loss limit, win limit and stop on a single win limit.

the menu can be found in the bottom right corner, where you can peruse the game rules (if it ever comes to that), view the paytable and the details around the bonus and extra features. If you must, you can turn the music off by pressing the speaker button in the bottom left.

How to Win Jolly Dicers Slots

The remaining five dice pay smaller amounts, as the go down in value increments of 0.10. So, the five dice pays 0.5x, four pays 0.4x and so on. The wild symbol can substitute for any dice symbol and its value is that of the matching dice.

Much in the game rides on the reel modifiers. These are a magic potion which bumps up to highest the dice that are between the opposing potions; the bomb symbol matched by another one opposite it causes the dice to be destroyed while you get paid for their value; the pistol symbols destroy the high valued symbols and you get paid for them multiplied by the bet amount; the sabers will wipe out the low paying symbols and pay you for it, and so on. There are six free spins triggered when two golden skull medallions show opposite one another.

The game is available as a free play demo slot, which enables the players to test it before playing with real money.

This is an online slot that has it all, including that X-factor which makes the game playable and nudging itself on your list of favorites. Overall, a great slot to play, with lots of extras, an expanding reel-set and a free spins bonus with multipliers.