Players will find the same layout agreement of four rows and five reels. These spin across 40 paylines that can turn up winning outcomes consisting of three or more matching symbols. Bets can be as low as 10p per spin and the cost of the Buy Bet is 100x. The theoretical Return to Player (RTP) of Money Train 2 is 96.40%, but it can get better. 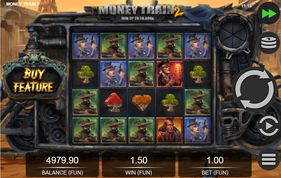 Relax Gaming are resolved to keep the great legacy achieved by Money Train by releasing a sequel. Anyone who's played the Buy Feature-able slot is going to find the follow-up nothing short of amazing. Money Train 2 slot comes with the Money Cart bonus, respins and payout potential of up to 50,000x multiplied by the winning bet.

The base game can get quite energetic, which is no surprise considering the flow of the reels and the appearance of the game. The volatility is high so players should expect a greater number of smaller base game wins and a possibility for a big win on any spin. Money Train 2 has a bonus feature that can trigger on its own or come on as forced by the 100x cost.

Relax Gaming has taken the Wild West theme from the previous game and given it a good steampunk upgrade. All of the high-paying picture symbols are renegade types equipped with Wild West steam and coal-powered technology. The reel-set has been embedded in a mean machine that rides on rails and is equipped with dreadful weaponry.

Money Train 2 slots packs a lot of detailed elements in the design. All of the symbols can spring to life when they become part of a winning outcome, and depending on the events that unfold on the reels, the engine can get quite lively. Even the sound score is amazing, which is no surprise considering the pressure to build an even more amazing Money Train slot.

How to Play Money Train 2 Slot

Seting up for the gameplay requires finding your way around, unless you've been on the Money Train many times before. Relax Gaming has included all of the gameplay buttons on the right-hand side of the reels, except the Buy Feature, which is on the left.

The menu button can be seen in the very bottom right corner. It opens up to a common area for all of the settings that players can also access from the game screen. The button at the very top of the screen is fast forward, as it causes the reels to make speedier returns.

To spin the reels one time per the bet, press the bigger of the circular buttons. Below it is the autoplay button and this is probably the best way to play Money Train 2 slot. Players can select the number of automatic spins from the presets and view advanced options in order to place a loss limit, win limit or single-win limit.

As for the bets, the game makes it plain and simple: players can choose between 10p per spin and £20.00 for the maximum bet. Regardless of the choice, Money Train is always going to spin across the full 40 paylines.

How to Win Money Train 2 Slots

Winning in the game requires winning outcomes of at least three matching symbols. It is possible to trigger multiple payline wins resulting from the same spin. The game has a wild that makes possible substituting for any regular symbol, except the bonus.

In terms of symbol values, the high-paying steampunk renegades are those that we’d want to see landing on the paylines most often. The wild is also wildly valuable as it pays 20x for five on a payline.

The inventor, who is the person with the crackling coils in his hands, can pay 20x multiplied by your bet for five of a kind. The nativ fellow pays 10x, the sniper 9x and the pretty lady pays 8x for five of the same. Payouts with four symbols range between 2x and 4x and three of a kind pay less than the bet, between 05x and 0.8x.

The game has a free spins bonus which is like the previous game's Hold and Win-styled bonus feature. Landing two bonus symbols anywhere triggers a respin. The multipliers on the symbols are kept and for each non-winning respin the game adds 1x to the multiplier.

The Money Card bonus needs three bonus symbols, or more. The persistent gold symbols can substitute for the standard bonus symbol in triggering the feature.

Three spins are awarded which don't end as long as there are new bonus symbols on the screen or any of the renegade symbols. The game comes with an action symbol that casts its special feature on the reels. The bonus game can extend the reels and thus incresae the chances for bigger wins.

Each picture symbol comes with a modifying or boosting feature.

Another set of bonus symbols are Persistent Payer, Persistent Sniper and Persistent Collector. In this regard, Money Train 2 has expanded on the feature as each of these symbols can impact the reels in order to boost the payout potential.

Relax Gaming has enabled the game as a free play demo at online casinos that host their games, including the game at hand. This enables players to get a feel of the gameplay and features with free credits.

This is definitely an upgrade to the original game. It comes with a better set of features and a Buy Feature whose theoretical Return to Player is 98.00% which is nothing short of amazing.

Discover the Money Train 2 slots by claiming a welcome offer right from this page and play at top rated online casinos.