Turning again to Norse mythology, this time we have Trolls in the center of attention. With a Wild Multiplier, Lock-In Re-Spins, and Treasure Trove Re-Spins feature, this can be a really interesting game to play. There is much to say about the design as well, so stay tuned to find out what’s in store for you this time in our Troll’s Gold slot review. 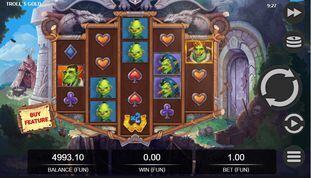 Trolls are beings originating from Scandinavian Folklore, i.e. Norse mythology. According to some sources, these beings dwell in isolated rocks, mountains, or caves, and they don’t pretty much like humans. They were even considered dangerous. In Troll’s Gold slot we have an unusual reels outlook with 20 active paylines, which make the theme looking even more appealing.

As we mentioned, this time Relax Gaming was inspired by the trolls of Norse mythology. Stories about them have been inspirations for movies as well, which speaks about their popularity, and it is no wonder that they are a background story of a slot. This game has a very unusual grid, where the number of reels is five, but the rows are changing on each of them, being 3-4-5-4-3.

Winning combinations are formed on 20 paylines. Multipliers can appear to boost base game payouts, and there are two other bonus features that can bring you an entertaining gaming experience as well. The maximum potential win in the game is up to 10,000x your stake.

Troll’s Gold slot is a fantasy-themed game with thrilling design and great animations. Reels’ setting is in a typical troll house made of stones, located in the mountains. We have a clear design, but also rich in elements like the nature surrounding, a tent in the background, and the stone troll house, where everything is brightly coloured. 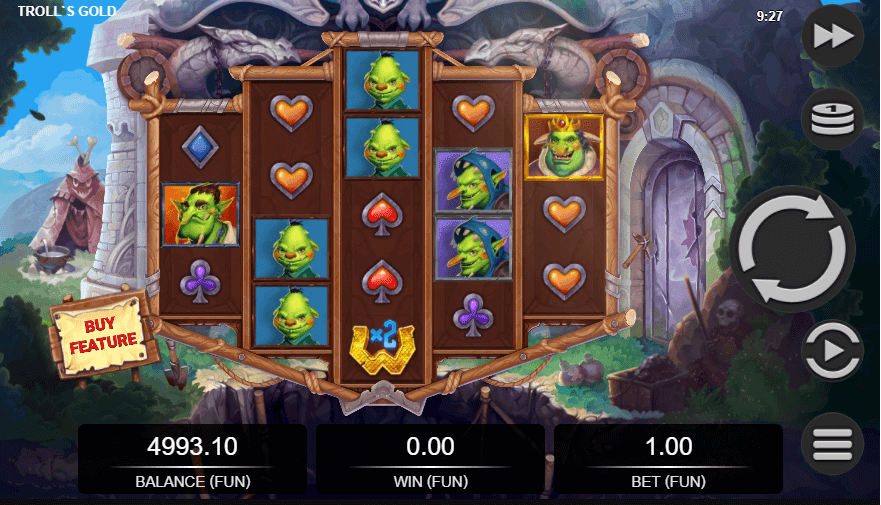 From time to time leaves are falling from the trees and bats flying through the reels. On the grid, there are also some excellent animations, like fire on the reels, or animated winning combinations, while the soundtrack is rousing but light and gentle.

The four standard card suits - diamonds, hearts, clubs, and spades, are the low-paying symbols with a value of 1x-2.5x your bet. High-paying symbols are four trolls, being a young troll, a troll in a monster costume, an older troll, and a king troll which payout 5x-15x in a winning combination. The scatter symbol is represented by a bag of coins, while the wild symbol is a golden W. This golden W may appear anywhere except on reel 1 to substitute regular symbols. If you land more than one in a winning combination, their values are multiplied by each other.

Being above the industry standard of 96.0%, Troll’s Gold RTPis capped at 96.30%. This is a highly volatile slot, which means winnings can be less frequent but large if they happen. To understand more about slots variance, volatility, and RTP read our full guide. The bet ranges for this game are from 10p to £80.

Troll’s Gold doesn’t come with free spins, but on the other hand, there are two kinds of Re-Spins. Also, there is a wild multiplier. During the Treasure Trove Re-Spins feature, there is a collector symbol looking like a treasure chest. Bonus features play important roles in potentially reaching the maximum payout of up to 10,000x your stake.

A stack of matching symbols that land on the first reel triggers the Lock-in Re-spin feature. The symbols on this reel, together with the other winning symbols anywhere on the grid, lock in position, while the unsuccessful ones spin again. This continues until there are winning symbols or a wild to be locked in place. In the end, when there are no winning symbols the wins are evaluated. If you manage to fill the reels entirely with winning symbols, a multiplier from 2x to 10x is awarded.

If you land a stack of gold bag symbols, that are scatter symbols, on reel 1, you can trigger the Treasure Trove Re-spins feature. These symbols again are locked into position. Two symbols during this re-spins feature award a win, gold bags, and treasure chest collector.

Not landing any gold bag or treasure chest symbol brings the feature to an end. The value of these symbols being locked in place is added together, and the bonus prize, if there is any, is applied.

Buying the Treasure Trove Re-Spins feature is possible with the Bonus Buy option. However, this feature isn’t available in some territories, including the UK.

Troll’s Gold slot is a mobile-optimized game, available on mobile devices. Due to its HTML5 technology, it is compatible with various OS, so it works great on Windows, iOs, and Android.

There are always some great games to recommend from Relax Gaming. It is no wonder Troll’s Gold slot is a great product, but let’s see what other interesting games you can from this game provider:

10 Kings - Even though it is a classic and straightforward template, the 10 Kings slot has plenty to offer in terms of bonus features and top prizes. You can trigger Kind Instant Win and Free Spins, while the RTP is 96.05%.

Sails of Fortune - Sails of Fortune is a pirate-themed adventure where the maximum potential winnings are up to 62208x your stake. With an RTP of 96.17% and 7776 paylines, this could be a nice game you can try.

Templar Tumble - Templar Tumble slot is a medieval-themed game that plays on 6 reels and 7 rows. Its visuals are probably its strongest asset. Three features can be triggered. The RTP is 96.26%, while there are 117,649 paylines.

What we most liked about the game is the unusual reel formation, i.e. the different number of rows on each reel. We like the rich design, and especially the Treasure Trove Re-spins Feature, which can bring excellent prices if it is triggered. You can try the Troll’s Gold demo at some of the casinos we recommend on Slotswise.

Discover the Troll’s Gold slot by claiming a welcome offer right from this page and play at top-rated online casinos.