Discover the Alaskan wilderness on the Giant Grizzly online slot. The game has five reels and 432 ways to win in the consecutive matching symbols style of play. The players will discover two wilds which can supercharge the wins and a free spins bonus. The range of bets is wide and makes this reel adventure available to anyone. 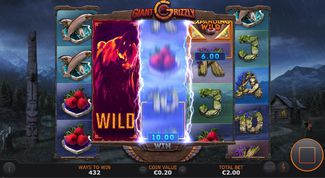 Play the Giant Grizzly slots for a chance to win cash prizes through the bonus feature and supercharged wilds.

A fierce battle between grizzly and men takes place on one of the most convincing wild animal-themed slots ever produced. This time around the slots experts behind the release are SunFox Games, based in Austria, who have released more than a dozen online slots under their belt. Some of their releases, including the Giant Grizzly slot, have been co opted for the Playtech gaming platform and that speaks of the quality of this production studio.

Giant Grizzly comes with 432 ways to pay which can provide consecutive symbol wins on a reel-set that has three three-row reels in the middle flanked by two four-row reels on the sides. With this arrangement of the reel set comes the consecutive wins style of play which can amount to a thrilling adventure on the reel-set.

There are two wild symbols in the game and one of these expands on the reel, and not just on one. The free spins bonus is also there to add to an already dynamic gameplay. The top symbol payout of 250x on the ways to win bet is not a meagre amount but it can also amount to more with the expanded wilds by connection other symbols for the win.

SunFox Games know what they are doing and this is why their games end up on international gaming platforms.

The game at hand offers depth throughout the graphics design. Each of the grids on the reel-set has a transparent background which reveals the big backdrop of Alaskan wilderness. The designers had remembered to pay tribute to the first nations by including a totem pole topped by a red squirrel.

The symbols on Giant Grizzly slots represent a number of animals, as well as a plate of wild berries and some bolete mushrooms. The high cards that represent the low paying symbols consist of stones covered by moss and vegetation.

A musical theme fills the background with beautiful sounds of nature for a complete gaming experience.

How to Play Giant Grizzly Slot

Your walk through the wild starts with the push of the Spin button, which is located in the bottom right corner of the screen.

To the left of it is a small round button that inscribes a thunder symbol, which when toggled on makes the reels spin faster.

Another look to the left is the autoplay which lets the players configure the number of automatic spins.

Underneath the third-middle reel is the display that shows the concurrent amount of the win and underneath this is the Coin Value.

This is where the players can choose from a wide range of bets, the smallest of which is ten pennies. The maximum bet on Giant Grizzly slot is £500.00 which sounds a lot like Playtech.

Players who want to check out the game's bonus features and the symbol pays can do that by selecting the 'i' button in the bottom left corner.

How to Win Giant Grizzly Slots

Wins are made with three or more symbols falling on consecutive reels. The matching of a kind symbols must start on the leftmost reel and stop uninterrupted towards the end reel. There can be more than one win outcome resulting from a single spin.

The most valuable symbol in the Giant Grizzly slot game is the deer which pays 250x on the coin value for five matching symbols. Next in line is the hare with 150x, followed by the salmons at 50x, the mushrooms and the raspberries at 25x.

The high cards, which include those between the ten and the ace, pay between 10x and 15x in ascending order.

Two wild symbols can help towards the payouts. The action wild collects the cash prize which shows in the area of the screen that's been highlighted by a blue electricity effect. This symbol substitutes for all, except the free spins symbol.

The Expanding Wild can grow to include three reels and three rows when it lights behind the highlighted area. This symbol also does not substitute for the free spins bonus symbol.

The bonus game of ten free spins is initiated with three or more symbols, which can fall anywhere on the reel-set.

SunFox Games have released this game as a free play demo, which lets the players discover the reel action without spending any real  money. On the other hand, the small bet of only ten pennies does well to provide the reel adventure before deciding to play with other amounts.

There are game features that are impressive, including the two kinds of wild symbols. Giant Grizzly has a free spins bonus where the above are also active. Overall it is a very exciting game that can turn up big wins for the lucky punters out there.