Big Time Gaming have come up with an amazing space-theme slot named Danger High Voltage 2: The Final Countdown. This is a megaways slot with 4096 ways to pay across a reel-set of six reels and an initil four rows which expand along with the ways to pay arrangement. So there can be big (expanded symbols) and colossal symbol, all vying to become part of the winning platform, towards a top pay prize of 5000x multiplied by the line win. Damger High Voltage 2 has random bonus features occuring in the game, multipliers and the Clone Wilds booster. 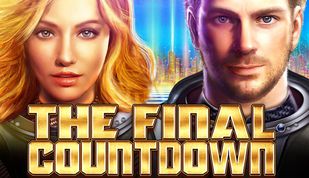 Be part of a space mission in The Final Countdown slot, by playing for a chance to win a 36,000 coin prize and 256x multipliers in two free spins bonus features.

Big Time Gaming are known for creating five-by-five gridded slots that have their own distinct gameplay feel, no matter the edition. Some of you may know that these are the slots experts behind the Holy Diver slot, as well as the infamous Bonanza, a game which has managed to reach the top of most popular slots list at a number of online casinos.

Still, The Final Countdown slot is a brand new online slot by the same crew, and it looks poised to contend with the previous two successful titles. The game's theme is a rocket-launching platform with a futuristic city skyline for a background.

The launching pad is the staging site for the potential winnings that can occur on this game that has the 4096 ways to win which have become the standard for Big Time Gaming slots. Now, knowing that this the sequel to the first Danger High Voltage slot, we are certainly expecting a smoother gameplay, more kick for our buck and a repeat of the possibility of 5000x wins during the base game.

So, if you are ready to take on The Final Countdown 2 slot, and both of its free spins bonus features, check out some insights about the game and claim a welcome bonus if you wish to explore it.

How To Play The Final Countdown 2

The second edition of this title sports a reel-set of six reels, four rows and 4096 paylines. You will immediately get the idea that the inspiration for this slot has something to do with the cult song Final Countdown which was popular across Europe before crossing over to the US in the distant 1986. At any rate, be prepared to face some Clone Wilds that can take up more squares on the grid than the standard symbols. There is yet another Wild symbol, but we will get to that in the part about winning the Danger High Voltage: The Final Countdown slot.

To set the wager per spin you don't need to search too hard, as is the case with other Big Time Gaming games, the settings are located to the right of the grid, in a cluster of buttons. The aptly labeled "Stake" window lets you select the bet per spin. In that regard, the bets start with as low as £0.20 and the highest amount that could be wagered per spin is £20 per spin.

The game offers the autoplay function which lets you set the number of automatic spins according to the sums that are available in the field. Another option that may be useful to some players is the paytable. This is accessed from the blue three dash symbol. Clicking or tapping this button opens up the table which displays the symbol pays and details around the bonus features.

The design is right on par with previous releases that were built around the same reel-set. The platform is a grid of energy on top of which there is a space shuttle ready to be launched into orbit. Space travel is always an exciting theme, and Big Time Gaming have done their bit in a non-imposing way that sets the mood for some engaging slots entertainment.

The reason why we think they didn't go over the top with the game are the symbols. Those that are to be seen on the grid are the high cards starting at nine and ending with the ace - which is the category of the lower-valued symbols. The high-valued symbols are a number of gems in different colors. Are these the reason why this space shuttle is being launched after all? That could be the idea, but whatever the case, the game doesn't congest the grid with on-theme symbols that have to do with space travel.

So maybe it's a good thing that Big Time Gaming didn't consult with NASA when it came to creating the symbols, and we like the way this slot game is. Besides those that we mentioned, The Final Countdown slot has specialty symbols, including two Wild symbols and a scatter.

How To Win Danger High Voltage: The Final Countdown Slot

The game has lots of amusing ways towards the potential big win. Some of the luckiest players alive may chance upon one of the stunning multipliers on the 4096 ways to win grid. In addition to the symbol wins, there are the bonus features, such as the Reel Clone Feature, which can occur at random to capture up to four reels and adjust the symbols so as to maximize the winning potentials.

Then there is the Clone Wild feature which can trigger multipliers that go in the hundreds. If you trigger the bonus with the scatter symbols, you will get to select between two bonus games: the Countdown Feature and the Heading for Venus feature. Both missions are lead by cosmonauts - the first is by a guy and the Venus mission by a girl cosmonaut.

In combination with the Clone Wilds feature, the free spins games are a window to some potentially big wins, with multipliers of up to 256x.

If you are ready to embark on the Danger High Voltage 2: The Final Countdown mission, you are welcome to claim a welcome bonus at one of the casinos on this page.