Discover the royal mint's golden vault and play the Megaways slot game for a chance to win amazing cash prizes. The game features six megaways reels and shifting rows which turn up wild symbols and bonus-scatters. Consecutive wins can lead to sizeable prizes resulting from the same spin and there is a free spins bonus and a supercharged bonus feature which starts with a x2 multiplier for each consecutive win. 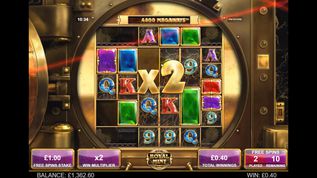 Big Time Gaming are starting 2020 with the amazing Royal Mint Megaways slots - play it for a chance to win up to 40,000x.

Big Time Gaming, they can't stop throwing incredible surprises at us. The first slot that they are going to release in 2020 has all the markings of the notoriously cryptic Federal Reserve, but it isn't titled that. The vault, the lazer beams that catch intruders, the multipliers and the gems all fit into something called Royal Mint Megaways slot.

The slots experts behind it have done a marvellous job that seems like a novelty in the megaways slots - which is the payout mechanism which BTG themselves invented. The innovation in question is the second four-reel row that has been added in addition to the one that we see in some megaways slots, for which a fine example is the Bonanza slot.

Other than that, Royal Mint Megaways comes with the Triple Reaction which adds two additional symbols on the sides of the standard reel-set, which interact with the six reels and rows that shift between two and seven symbols. The scatters trigger the free spins bonus and there is yet another bonus called Heartstopper which triggers with the help of the scatters on the side of the reels.

The design features have the signature Big Time Gaming touch. The symbols and the surrounding elements are all much improved renditions of the same on their previous releases, such as Lil Devil and Bonanza. This adds a nice touch to the gameplay, but even more comes from the special effects which are a real treat, such as the lazer beams and the gushing of gems and coins during the big wins.

The base game takes place in front of a mansion that represents the imaginary Royal Mint. The free spins bonus takes place inside the golden vault whose heaviness can be felt just witnessing that part of the gameplay. Royal Mint Megaways slots provides a dynamic gameplay which is typical for slots of this genre, but something else has been done to it to improve the overall experience.

All of the controls on this game are part of the company's familiar layout. The buttons are on the right-hand side with the setting for Stake at the very top.

This is where the players can use the left and right arrows to shift through the available bet amounts, which start at £0.20 per spin and have a cap of £20.00. Regardless of the bet, the players always play for the possibility of triggering the full 117,649 ways to win.

Blue button with a three-dash mark on it loads the menu where the players can view payout information and gameplay details and to the right of it is the button for autoplay, which lets you choose from the automatic spins presets.

Additional settings in the autoplay button allows the players to press play on the Royal Mint Megaways slot and kick back and relax, because the additional options for stop on a single win amount, or stop on a total balance decrease let you choose a bet and watch the reel action.

Those who have played megaways slots should know by now that the cascading wins mechanism warrants smaller symbol payouts and that this is balanced by the consecutive wins that can result from a single spin (and one-time cost for that matter).

At any rate, Royal Mint Megaways slot has the purple gem as its most rewarding symbol, which pays 50x on the winning bet for six of the same, but also pays for two of it when it fallls on the leftmost reel and the one next to it.

The wild symbol is an amalgam of gems of different colors. This is a symbol that substitutes for all, except the scatter-bonus, which are gold plates that spell the word MINT.

The bonus starts with 12 free spins but three additional letters will throw in four extra spins, which sounds like a pretty good deal. What is more, like in other BTG megaways slots, the unlimited multipliers are in play and increase by 1 with every cascading win.

The Heartstopper feature triggers when you have collected 40 gold bars and these are not easy to come by. In other words, they only appear, and are added to the bucket, when there are three scatter symbols (letters) in view. Once you have hit 40 you are taken to the super free spins bonus where the win multiplier begins with x2 and adds +2 on top of it for each consecutive win.

It is expected that BTG will release this as a free play demo in due time but while the game is spanking new it is likely to stay behind the online casino paywall.

We have a super exciting game that takes all the best from all previous megaways slots by BTG and raises the standard in dynamics, gameplay but volatility too.