Step right up and enter a cartoon-ish version of the Roman empire with the Win in Rome slot by Live 5. This bright, colourful online machine plays on 5 reels and 20 paylines that offer you an opportunity to win up to 5,000x your bet in a spin. Packed with wilds, multipliers and infinite free spin retriggers, expect a fierce, mighty battle on the reels. Go through the template and gameplay in our Win in Rome slot review. 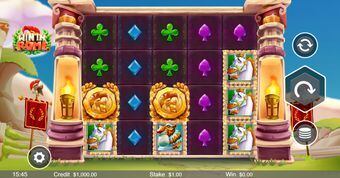 Well, Rome sure wasn’t built in a day, but you might win in Rome in one move with the Win in Rome slot game. This slot game is developed by Live 5, a newly established slot developer who has set up a good online slots portfolio. This time, they aim to recreate the Roman atmosphere and passion on the battlefield in a rather playful and cartoonish way. The action is set up between massive stone pillars where you’ll land highly rewarding and powerful symbols. The gameplay relies heavily on wilds that bring forward multipliers and wild stacks that trigger decent wins. Wonder how this volatile reel machine works? Stay with us as we reveal the features and extras in our detailed review.

About Win in Rome Slot

Live 5 have picturised the life of Ancient Roman civilisation in their latest slot game called Win in Rome. Paying great attention to Roman-themed games and how they’ll play on the reels, they provided a great visual package with decent features and extras. The Win in Rome slot plays on 5 reels,4 rows and 20 active paylines. To win, you need to match three or more symbols across a line, starting from the leftmost reel. The same symbol can land as stacked in height to make it easier on you regarding prizes.

Before you start your reel action, you must adjust your betting level ranging anywhere between £0.10 and £50. This is ideal for players who are not comfortable placing large stakes per spin or simply like to stick to their budget. Wild symbols play a crucial role here, being more than just a substitute for regular symbols. Here, the stacked wild is called the stepping wild symbol moving for one position at a time during spins. Powered with scatters that trigger free spins and multipliers attached to them, this slot might win you a maximum of 5,000x your stake. 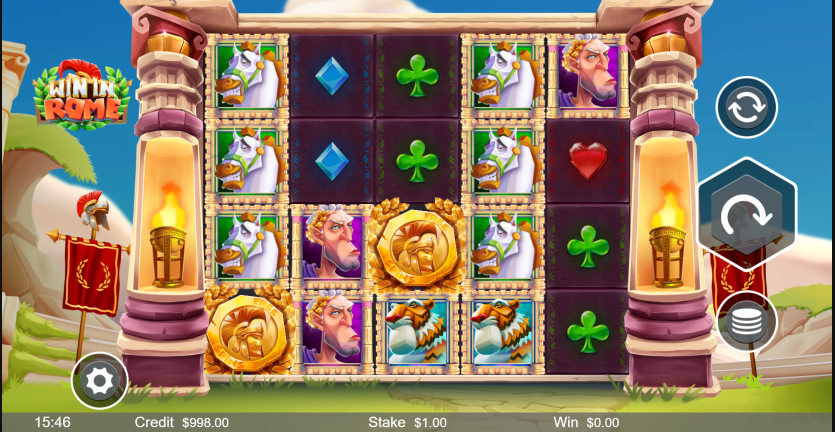 As we mentioned above, Win in Rome is a cartoonish slot title inspired by the Roman-themed games and life in ancient Rome. Regarding the overall feel of the design, you might find it quite similar to Asterix and Obelix comic series. The animations and graphic presentation really stand out, while the action plays between two stone pillars and red waving flags. Accompanied by warrior-themed, cheerful sounds in the background, every detail seems in line with the slot game’s concept and identity.

On the reels, you’ll find a mix of different symbols. First, we have the standard card suit symbols (clubs, diamonds, hearts and spades) accompanied by horses, tigers, soldiers and Caesar. The shield is the wild symbol, crucial for triggering the bonuses and extras that deliver the game’s maximum potential. Both the emperor and shield are worth 100x your bet if you manage to land five of those on a payline. The golden coins are the scatter symbol that triggers the free spins round, but we’ll get to that in short.

RTP, Variance and Payouts for Win in Rome Slot

The Win in Rome slot’s RTP (Return to Player) is set at 94.63%, which is below the industry average of 96%. When it comes to all Live 5 releases, they’re all low on the RTP scale, providing a relatively unstable math model. In addition, the game’s variance is medium, meaning you can land both low and high-sized winnings more frequently. The maximum win you can take from this game is 5,000x your total stake. If you want to find out more about different RTP and variance models, read our Variance, Volatility and RTP guide.

Gameplay and Features on Win in Rome Slot

The gameplay of the Win in Rome slot heavily relies on the wild symbol, being vital for triggering a few of the bonuses and extra features. We’ve mentioned that the stepping wild symbol is presented as a shield covered in gold. At the same time, the golden coin scatters trigger the free spins game. Shields also play a vital role during free spins, so let’s explain them in more detail:

The shield represents the wild symbol in this slot game, or if you prefer, the Stepping Wild. This symbol will always appear in stacks during gameplay. Whenever they land on reels, they stick to them and nudge one position down on every spin until they eventually fade from the reel. This feature will help you a lot in making several winning combos at once.

This feature is triggered as soon as you land 3 scatters on reels 1,3, and 5. There are no limits regarding how many free spins you’ll get, as you’ll reset and retrigger the feature as soon as you land stepping wilds across the grid. The scatters that triggered the round will reveal modifiers to boost your total. You’ll win up to 10x multiplier, up to 3 Wild reels or up to 8 Wild stacks in height.

Win in Rome Slot on Mobile

The Win in Rome slot is HTML5 optimised, meaning it works seamlessly on any mobile device and any operating system. The design, layout, bonus features, and everything that is part of the game work without issues when playing on a smaller screen.

If you can’t get enough of fierce reel action and want to explore other slots with a similar theme, we warmly recommend you check the Spartacus Super Colossal Reels slot. This title by WMS will impress you with two contracting reels sets that enable you to play with 100 active paylines. If you want to revisit the medieval times of the Dark Ages, the Crown of Valor’s gameplay would definitely suit your taste. With tumble mechanics and four different wilds that might win you more than 15,000x your bet, Quickspin made one of the best action-themed slots we’ve reviewed. Finally, check out Orb of Osiris, an Egyptian-themed title by Live 5 that introduced an innovative reel mechanic featuring 3 layers of symbols on the reels.

The simple and visually appealing gameplay of the Win in Rome slot works well and makes the game popular among the players. Stepping wilds tend to appear quite often during gameplay, and it’s not that hard to trigger the Free Spins round. This means that you won’t wait “for ages” until you trigger that bonus feature. However, the modest RTP model and a payout of 5,000x might not be that attractive if you’re looking for a more powerful slot model. Overall, this game met our expectations, despite some flaws regarding the math model. If you’re a fan of historical, action-themed slots, we recommend you give this game a try.

Explore the Win in Rome slot by claiming a welcome offer right from this page and play at top-rated online casinos.

Rome: Rise Of An Empire