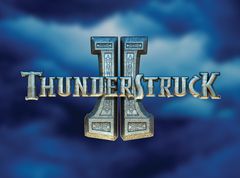 The theme of ancient gods is nothing new to the slots scene, although Norse gods perhaps feature a little less frequently than their Roman and Greek counterparts. Thunderstruck II is attempting to change this, bringing Scandinavian mythology to the reels.

Upon launching Microgaming’s Thunderstruck II slot, you’ll instantly notice the incredible and somewhat icy-looking graphics. The steel blue background and border barely separates itself from the reels and the chiselled playing card symbols!

These symbols also help to boast of the game's aesthetic quality, with the likes of a Viking longship and Norse gods Loki, Valkyrie, Odin and Thor all taking place on the reels, alongside the 9, 10, J, Q, K and A.

Aside from the standard reel symbols, this slot’s wild is represented by the Thunderstruck II logo and will substitute for all others to help create winning combinations, except the hammer scatter.

How To Play Thunderstruck II Slot

Before spinning the Thunderstruck II slotsreels to try and land winning combinations on any of the 243 paylines, you must select your coin size and total stake.

Coin sizes range between 1p and 5, but because all of the paylines are fixed, your coin size will always be multiplied by 30. So, by using the + and - buttons at the bottom of the screen you can change your coin size.

Thunderstruck II  also lets you play with more than one coin per spin. You have the option to wager with any number of coins between one and ten, again multiplying your stake by this amount. The benefit of playing with more coins means you have a better chance of landing winning combinations.

How To Win Thunderstruck II Slot

Like most slots, you will receive cash payouts by landing winning combinations of three or more symbols on any of the active paylines. As all 243 ways to win are fixed, all you’ll need to do is choose your stake and spin.

Landed combinations of five symbols, meaning one of each on each reel, will reward you with the highest payout. Thor is the most lucrative of all, paying out an impressive 500x your coin size for a combination of five across a payline.

The Thunderstruck 2 slot is able to have so many paylines and ways to win because it pays out for combinations landed on adjacent reels both left to right and right to left!

And like we said before, the Thunderstruck II game logo is the wild symbol and will fit in to help create a winning combination by substituting for all others except Thor’s hammer, which is the scatter.

Like the first one, Thunderstruck 2 has plenty of exciting bonus features to keep players enticed and to keep the wins coming, or at least the chance of them!

This can occur randomly and in which case, up to five reels will turn completely wild and players are then given the chance to land some lucrative combinations.

Some consider a number of ways to win on Thunderstruck II as a bonus feature in itself. Because symbol combinations can be landed from left to right and right to left, Thunderstruck II offers players plenty of ways to get some nice sums of cash, although the RTP remains the same.

This is perhaps Thunderstruck II slot’s main bonus feature and one that triggers more frequently and gets more profitable the longer you play. Landing three or more of Thor’s Hammer symbols will trigger this round with the gods and their respective rewards, in the following order:

Better yet, during the Thunderstruck II game’s Great Hall of Spins bonus feature, free spins can be re-triggered, so this round has the potential to be extremely lucratively again and again!

Thunderstruck II lives up to expectations after an impressive and exciting predecessor. The graphics are crisp and accurate, whilst the extra bonus features are sure to keep players enticed. Overall, it's nicely designed and gameplay is smooth, whilst the 243 ways to win keep excitement levels high!

We think the Thunderstruck 2 graphics are the key part of this slot and contribute to the quality of the game. The gods are extremely well-drawn and even the playing card symbols are on-theme, designed in an icy, rocky style, as they perhaps should be with a Nordic-themed slot.

This slot also features some nice animations, including the lightning flashes both on and above the reels, for instance when the scatter symbols are landed. Plus, the reels spin smoothly and players don’t have to wait too long for them to stop, hopefully landing on some high-paying combinations.

When it comes to online casinos, Mr Play casino is undoubtedly one of the largest and most renowned casinos in the world. So, it is not a surprise that it is listed as our first choice on the list of slots sites with Thunderstruck II. The selection of games on their site is astonishing, including releases from popular game providers such as NetEnt, Play’N Go, Betsoft, Playtech, Genesis Gaming and more.

Flume Casino is a slot site owned by Tau Marketing Services. Once you join the site you will be able to claim their welcome bonus offer up to 100 Spins. You can also claim a range of other promo offers, so once you make your first deposit and start playing, you will be getting access to various offers, as per the Loyalty Programme.

Leo Vegas is one of the most popular mobile-friendly casinos in the UK and beyond. The site is certified by the UK And Maltese authorities. Games by the leading providers are offered at Leo Vegas and the site is available in few languages, including Russian and German. You can contact the customer service 24/7 through live chat, over the phone or via email.

We’d recommend Thunderstruck II to all players and if we’re honest, there isn’t much that we can pick out about this slot that we don’t like. It looks great, plays well and most importantly, it is incredibly lucrative, not only in terms of bonus rewards including multipliers and free spins but also in terms of straight cash winnings!