Discover the next big thing of a garage band in The Smashing Biscuit slot - a 20 always-active payline slot playing on 5 reels and 3 rows. The game has above average RTP of 96.01% and comes with a free spins bonus, which has three wild symbols. The top prize comes by way of the biggest bet of £100.00 for the top symbol, and on a multiplier of 11x, to the effect of a £27,500 cash prize. 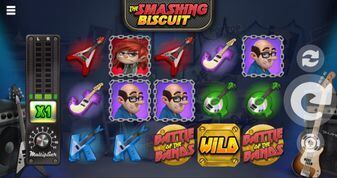 Play The Smashing Biscuit slotfor a chance to win cash prizes, 10 free spins bonus with perks and gain multipliers of up to 11x, that could lead to the game’s jackpot prize of £27,500.

Be part of a three-piece band that's priming itself for fame. Everyone knows that with fame comes the money, so will there be any lucky players who can help this bend gear up with awesome riffs and winning verses? The reel set on The Smashing Biscuits slot consists of three rows and five reels. These play across 20 always active paylines, which can turn up the high paying picture symbols, as well as special symbols such as the Wild and the bonus/scatter.

The Smashing Biscuit has a meter that can go from cool green to hot red within seconds, thanks to the rising levels of the multipliers during the free spins game. The base game can turn up a random feature and the free spins bonus feature can turn up three wild symbols. The only thing that needs to be done by the avid garage band fans out there is set the bet per spin and then hit the spin button. And here is how to do that.

How to Play The Smashing Biscuit Slot

The first order of business after deciding to play the game is to select a bet per spin. Doing this takes a second. Click on the poker chip button that is underneath the big, round Spin button, and a table will open up that has a wide range of bets. The smallest one is just £0.20 and there are several small bet increments that lead to the bet of £2.00, so the players can choose more than one low-stakes bet per spin.

The high-stakes bets start with £20.00 per spin and these go through increments of that exact amount before reaching the maximum bet of £100.00 per spin. Once you've had your pick, pushing the Spin button will set the reels spinning across the 20 always-active paylines. There is also the option to use the autospin button, which is located just above it. This button opens up a table where the player can choose from the automatic spins presets and add a single win or a total loss limit, in order to mind the balance. To stop the auto spins feature simple press the same button again.

Another button is there to lead the players to The Smashing Biscuit slot paytable, where all of the information on the symbol wins and bonus features is being kept. Access the paytable from the menu icon in the top left corner and then press the dice menu to go for a rundown of the game's symbols and their pay.

How to Win The Smashing Biscuit Slots

Winning the game is always a matter of luck, but the high-paying symbols are there to help to some lucrative amounts if a big win does hit.

All of the symbol wins are displayed in cash, according to the selected bet, so the paytable will always show the wins according to the bet. With a bet per spin of £2.00 the game's most valuable of the standard symbols, named Tiny Biscuit, pays £50.00 when five matching symbols land on a line. The next over is Crunchy Biscuit, the drummer, whose symbols pay £25.00 and Soggy Biscuit pays £10.00, while Dad does £8.00.

The rest of the symbols are the royal cards, from jack to the ace, and these pay £4.00 for five and £6.00 for five depending on the symbol.

The Wild symbol is also there to substitute for all, except the Battle of the Bands symbol, and falls on all reels, except the middle third reel.

Before we get to the bonus feature part, let's state that the game has a gauge meter on the left side of the reels which provides multipliers to each subsequent win. The Smashing Biscuit slot isn't a collapsing reels type of a slot game, but does provide a bonus on subsequent wins, which can occur with each individual spin. The gauge could rise up to x11 and that is a multiplier of eleven times the winning outcome. This part of the game is not active during the free spins.

The bonus feature is triggered by the game's scatter symbol, which is called Battle of the Bands. When three of these land anywhere on the screen there is a prize of 10.00 rewarded. The symbol can only land on the odd number reels. The ten free spins start and continue with the high-paying symbols only, and an extra set of band-related items, such as a contract, a guitar pick and a t-shirt. The three band members each have a wild symbol, substituting for all, and each one paying a wallop of £50.00 on a bet of £2.00, with four - instead of five symbols on the reels.

Our The Smashing Biscuits Slot Review

The game is quirky in terms of its design and theme, yet, it doesn’t joke when it comes to the potential winnings. There are solid sums that are paid for four symbols only during the free spins bonus. The x11 multiplier can rock your world if there are that many winnings in a row. But not all of it is lost if there isn’t a consecutive win, because the gauge takes out x1 from what has been piled on the meter thus far.

Play The Smashing Biscuit slots at one of the online casinos on this page. Claim a welcome offer for bonus money or free spins to start your adventure today.