Those who play Dark King Forbidden Riches will discover a phenomenal reel adventure taking place on three rows and five reels that spin across 20 paylines. Players can enjoy the mysterious premise and play for a chance to win cash prizes with as little as 20p per spin. The theoretical return to player (RTP) of Dark King: Forbidden Riches is 96.06% and the variance is medium to high. 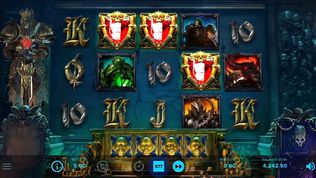 Following a spate of releases that caused a few people to raise an eyebrow (Sweety Honey Fruity, Hotline 2, Gems of Adoria), NetEnt are back with a rage and on their roster, right next to Rage of the Seas slot is the fantastic-looking Dark King: Forbidden Riches slot.

Since the art form is as excellent and can bring about a thrilling experience in the base game, solely on its own merit, NetEnt's Dark King has already captivated the slots experts' attention on our end. But in addition to that, the game also comes with a free spins bonus, the standard wild symbol as well as sticky wilds and win multipliers. Overall, it's a thing to behold and most players will take heed.

The developers at NetEnt are true tinkerers with the bizarre and abysmal when it comes to weirding out a theme. In the game at hand they have created the weirdest of worlds in which the high-paying symbols are creatures that are driven by dark forces emanating from their mirror-image, in spirit, celestials like Luna and Mercury.

Dark King: Forbidden Riches slots has a lot taking place on the reel set and along the flanks. On the left side there is the Dark King himself, who is content with his eternal duty of twisting a broadsword inside a magical stone. On the reels, wilds stick on the energy field of a reel set while winning outcomes are celebrated in souls becoming spirited away from the underworld and into some equally mysterious dimension.

If the player can submit to the game, it is going to subsume anyone's interest and guide it towards a potential big win event, as the game can pay up to 2000x your bet.

Slots players can start playing the game following the setting up of the bet, which really takes just few clicks or taps on the screen once the game's been selected from the roster of games.

If you are about to look at the screen and wonder where do you press to start on the reels, the reel set may seem a bit cluttered or difficult to follow. The graphic design does that but it's quite easy to find the buttons and controls, as NetEnt make it so in each of their productions.

The play button on the Dark King: Forbidden Riches slot can be found in the center of the screen, underneath the reel set. To its right is the fast-forward button, which toggles on the turbo spins and to its left is the autoplay button, which enables players to enjoy the game hands-free.

Those of you who want to play Dark King Forbidden Riches in autoplay, the menu opens up a table with a number presets for the automatic spins and few optional settings which maintain control over the balance spend while in autoplay mode.

Winning at the game requires three matching symbols to land on one of the 20 paylines. Outcomes consisting of five matching symbols are the optimal payouts in this game. The wild symbol substitutes for any and there are few other features that can help the players towards better payouts in both the base game and during the free spins bonus.

Dark King: Forbidden Riches slot has few symbols that are worth mentioning, for their payouts: the Dark King is most valuable as five of his ominous portraits pay 25x your bet; the predator-like creature has a symbol that pays 20x for five of a kind and the beaked, mechanical creature and the undead raven rider's symbols pay 12.5x and 15x.

The wild symbol is really the one that you'd want to see more of during the base game and the bonus feature. Why? Because this is not only the symbol that can substitute for any other but also the one that's responsible for adding win multipliers to the board.

If you land two wilds on the same spin any ensuing win outcome gets a multiplier. It is possible to land multiple wilds which means multipliers can amount to as much as 5x.

During the free spins bonus each wild that lands in the electrified cross area adds a free spin to the tally and that wild becomes sticky. Three, four and five scatter symbols (red shields) start you off with either 10, 12 and 15 free spins.

Players can get on with the dark kind and even get chummy at many online casinos. Experience the game with a bonus by claiming one from this very page or play it in practice play mode as a free play demo slot to check out this mysterious world free of charge.

The game looks very lively and it is indeed just that. Three features (free spins, sticky wilds and multipliers) are just enough for a fluid reel adventure and the medium to high variance is better on the game than say, high or straight low, as you get to play for the possibility to land a big win.

Discover the Dark King: Forbidden Riches slots by claiming a welcome offer right from this page and play at top-rated online casinos.

Hall of the Mountain King